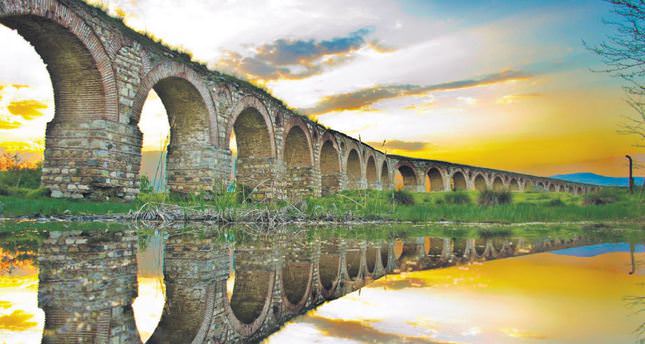 Water is a problematic issue facing humanity. Legends tell the story of men carrying water from mountains to marry the daughters of wealthy families. The Ottoman Empire resolved the problem by building aqueducts

You may hear Eastern people banging the drum for the benefits of water, an indispensable part of our existence. "Water protects your stomach if you drink it during a meal," they say. However, experts do not recommend drinking water shortly before or after a meal as it interferes with digestion.

In the middle ages, the use of still water with microbes in insanitary conditions caused pandemics in many societies. This is because Europeans preferred to drink wine instead of water while cleaning their houses.

On the other hand, water and bread are the two basic foods of Eastern cuisine. Elderly Turkish people like to say "live as long as water" when they are offered a cup of water. Pouring water after someone who is embarking on a long journey is another common Turkish tradition. It is believed that travelers can then return to their homes as smoothly as water.

Istanbul has many places famous for its good quality water, including the neighborhoods of Hamidiye and Kayışdağı and the districts of Çamlıca and Yakacık.

The water from these neighborhoods was once distributed to the whole city. If you are a water connoisseur, then you will probably be able to differentiate between different waters. Famous author Ahmet Midhat Efendi's garden is also popular for its high quality water.

There are some kinds of water believed to be good for diseases. To illustrate, the water streaming from rocks opposite the dock of Vaniköy in Üsküdar is said to cure renal failure. Turkey is also rich in hot springs with therapeutic uses where people spend weeks to maintain good health. Sultan Abdulhamid II used to bring water from Yalova in barrels.

Established in the 15th century, there was a chamber of "sakas" (water carriers) under the reign of the Ottoman Empire. They used to carry water to houses in heavy leather bottles. The water was brought from water springs or fountains by horse-drawn carriages.

People were mostly living in houses with wells or cisterns built to catch and store rainwater. The Ottomans, however, used the water not for drinking, but for doing housework or gardening.

After 1874, a water supply from Terkos Lake to the European side of Istanbul city was started by giving some privileges to legal persons. Later, the rights were passed on to the French company Terkos. Water service to houses was commenced at the same time. The Anatolian districts and villages received water services after the 1950s.

Apart from the rural areas, water supply is always troublesome even in city centers; therefore, the city population was kept under control. Dating back to the Byzantine era, aqueducts were constructed to bring water from the districts of Kemerburgaz and Halkalı, the Istranca Mountains and the Belgrade Forest. Until the reign of Mahmud II, almost all Ottoman emperors were interested in constructing new aqueducts.

You may find surviving ones around Istanbul. The most attractive Byzantine cisterns in Istanbul are the Cistern of Philoxenos and the Cistern of Basilica. The Ottomans used the cisterns for irrigation only.

At that time, there were two places of water supply in neighborhoods: squares and street fountains where locals could carry water to their homes.

Considering the role of water in traditions, some locals saved money to build fountains or carried water to rural areas through terra-cotta pipes. There is a common religious saying, "One who has many sins should offer water," as offering water, in Islam, is believed to have great rewards. Alternatively, craftsmen offered cold water to passersby on hot days and wooden water spots were placed on roadsides.

As previously mentioned, the famous Iranian folk story Ferhad and Şirin tells the love story of a wealthy girl and a poor young man who is forced to bring water to her family by drilling for it in the mountains.