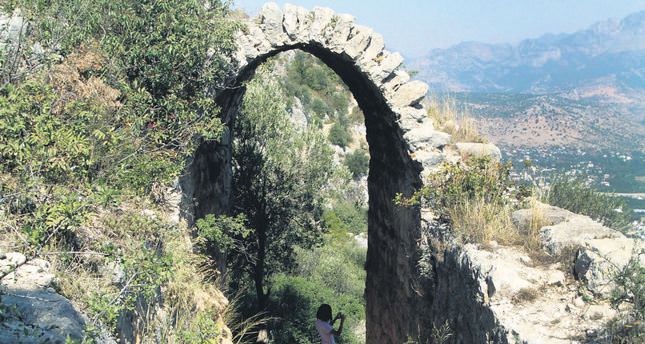 Travel often leads us to meet new faces in unexpected places. A rather wellplanned trip to Kozan results in more than just a day of sightseeing

Being hijacked was far from our minds that morning as we hopped into a semi-private minivan taxi - called a dolmuş - to Kozan, an obscure, sunbleached town encircled by the Taurus Mountains and an agricultural plain. Kozan may be an odd destination for most travelers to Turkey, but for me it was important. I was doing fieldwork for my first novel, which is set in Cilicia in the early 20th century. I wanted to get a feel for the inland towns occupied by the French from 1919 to 1921, and my husband and I were already asphyxiated by the cement, exhaust fumes, and traffic of Adana. Formerly called Sis, Kozan was the capital of the Armenian Kingdom of Cilicia in the 12th, 13th and 14th centuries. It remained an important center of the Armenian Apostolic Church until 1915. It sounded interesting, so off we went. After an hour or so of driving across the golden Cilician plain, we arrived in a modern and unremarkable part of Kozan. I was disappointed. So far, it was nothing like the beautiful city of whitewashed houses described by the Armenian bishop and writer Grigoris Balakian. I knew that the town's castle was located on a rocky peak overlooking the newer neighborhoods, vineyards, and citrus groves. I also knew that at the foot of the castle we might find a few old Armenian houses. But the dolmuş was emptying stop by stop, and signs to the castle were nowhere in sight. I asked the driver where the old town was. He politely told me to sit down. Soon the dolmuş was completely empty and the driver was obviously taking us off-route, up a steep, winding road. Both my husband and I were a bit nervous. Although I spoke only a little Turkish at the time, I made another attempt to ask about the old town. Again the driver gestured for me to sit down. He continued chatting, and I continued to understand very little. Suddenly the castle rose up before us. Enormously relieved, we got out, thanked him and said goodbye.

He, however, had no intention of disappearing. By pointing at his watch and locating words in my bilingual dictionary, he informed us that he would be back in one hour. We tried to say that it was not necessary, but he insisted.

So we visited the castle, originally built by the Abbasids in the ninth century and reconstructed by the Armenians in the 12th. It was a dizzying experience as there were no guard rails and there had been no recent restorative work to ensure the safety of the monstrous, crumbling structure atop a treacherous crag.

Afterward, we drank sweet tea while resting on the little stools of a makeshift cafe run by a poor old woman. As promised, our driver - showered, perfumed, and in fresh clothing - returned at the appointed time.

He gave us a bus tour of the old town and took us to a "boutique hotel" restaurant located in an old Armenian mansion. Aha, you might think, the driver was after a free meal. Wrong again: He insisted that he had already eaten. Why, then, did he take us there or anywhere? We understood that we were not being hijacked in the traditional sense, but we wanted our freedom. And we really wanted to explore the old town on foot.

After lunch, he dropped us off at the dolmuş station so that we could catch the next shuttle back to Adana. We tried to give him a tip to cover the expensive gasoline that he had used that day, but our offer was refused. Apparently, he was so impressed by the fact that two foreigners wanted to visit his way-off-the-beaten-path town that, on the spur of the moment, he decided to become a tour guide. We, on the other hand, had been incapable of understanding that his kindness was altruistic.

We never did explore those old Armenian streets, but perhaps we took away from Kozan something more valuable: the memory of a young Turkish bus driver who was willing to drop everything and spend his day with strangers - just for the pleasure of making someone else happy.
Last Update: May 14, 2014 2:55 am
RELATED TOPICS