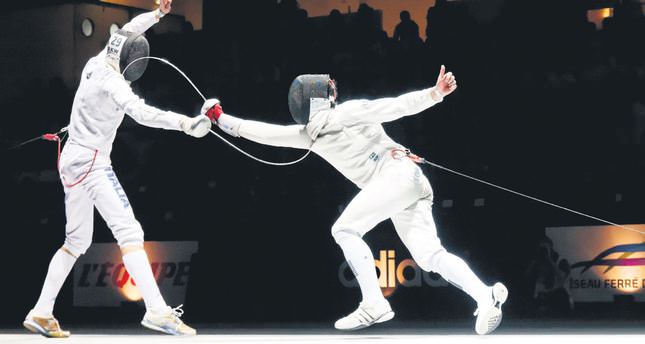 by İsmail Selim Eşsiz May 16, 2014 12:00 am
Before nuclear bombs and drones, there were guns and dynamite, and before that, there were swords and shields. With these weapons of choice, men fought wars to defend and to attack. While the days when swords reigned are long gone, many people found ways in which to relish the glory in a sporting environment.

Born in Europe, modern fencing first developed during the 18th century Renaissance and became an Olympic sport in 1896. The Olympic games are also known as the Games of the Olympiad. Turkey joined the bandwagon in 1923, forming the Turkish Fencing Federation with Fuat Balkan heading the federation.

Today, the federation in Turkey has 2,500 fencers. Although it is an old sport, fencing is somewhat underappreciated in Turkey, only active in 40 cities out of a total of 81 cities in Turkey. In 2007, this number was a mere seven. The several medals won in recent championships by Turkey's juniors fencing team give hope for their future in the sport.

Once a dangerous sport, fencing today is conducted in quite a safe environment. Every fencer is obligated to wear protective gear, such as a form-fitting jacket with straps, plastrons, a protective glove for the weapon hand, short trousers called knickers and, of course, a mask that protects the face and neck, which was first invented in 1780 by the French Fencing Master La Boessiere.

While many people only think of a fencing sword as nothing more than a long stick with a little ball at the end, they might be surprised to know that there are actually three different kinds of fencing swords.

The first one is called a foil. This is the most common sword of the three, both in usage and in tournaments. The second is called an épée and is descended from deadly rapiers. The rules are different with the épée, and the entire body is a valid hit spot. The sabre or saber is the last one of the three, and it differs from its sisters in terms of the usage of the sword. In sabre fighting, it is possible to score with the edge of blade. Therefore, sabre fighting is quite fast and maintains its speed throughout a match. Foil and épée fighters, however, usually fight much slower with more concentrated moves but with sudden bursts of speeds to score hits.

There is another type of sword fighting though, known as Kendo. Kendo is a Japanese martial art that evolved into a modern-day sport. It descended from kenjutsu the samurai sword fighting style. Kendo itself means the Way of Life. A bamboo body held together by a leather shinai is the type of sword used in Kendo. Although in modern times, some have started to use carbon fiber reinforced resin slats when making a shinai. All players are required to wear a helmet called "men" covering both the face and neck. The arms and waist are protected with padded fabric, and gloves are worn on each hand. The last sturdiest part is the breastplate that protects the torso.

Kendo is a sport that is rapidly rising in popularity in Turkey, particularly for people looking for an alternative to generic ballgame- based sports. Turkey is also a member of the European Kendo Federation, which holds championships every year. Turkey managed to send 13 people to the European Kendo Championship in France this year: Six on the men's team, six on the women's and one in the youth category. In 2013 this number was only nine. The world championships, however, are held every three years.

In Kendo, the number of "dans" determines ones' ability level. Each dan indicates more training in Kendo, and eight dans also require its applicants to be over 46 years of age with 10 years since receiving the seven dans. Eight dan exams are thought to be the hardest, since only 1 percent of the applicants manage to pass.
Last Update: May 16, 2014 1:31 am
RELATED TOPICS