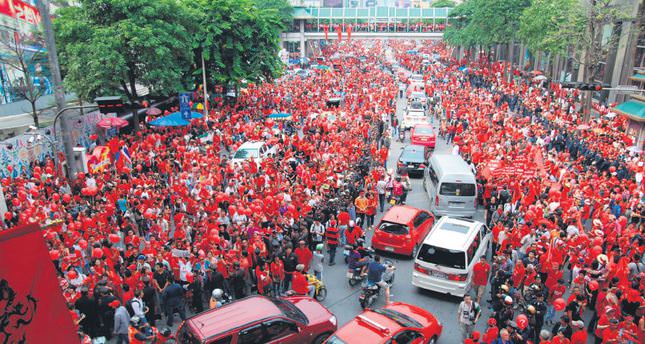 Recent events in Thailand have shed light on the risks facing democracies in emerging economies. The reporting of such matters also demonstrates how the media approach colors our understanding of current events

Last December, while corruption scandals and leaks of illegally attained tapes were erupting in Turkey, riots and protests were taking place in another country to the east - Thailand. In these riots, 23 people died and hundreds were injured.

The center of all this fury was Prime Minister Yingluck Shinawatra. At the time she was depicted by Western media as a corrupt politician, coming from a corrupt family and heading up a corrupt government; her brother, a former prime minister, had "fled" the country to escape being arrested on corruption charges.

The innocent reader's heart went out to the anti-government protestors, the "yellow-shirts," who were so bravely seizing public offices, standing up for democracy and making their voices heard. Middle class sensibilities stirred - horror of horrors, Yingluck was trying to bring back her brother Thaksin to help run the country.

So when the courts ruled last week that Yingluck had to be removed from her office, it was only natural to expect a celebration of justice. But in the Economist we read: "Look on and despair. A decade ago Thailand was …rare proof that in South-East Asia a vibrant democracy could go hand-in-hand with a thriving economy.

Contrast that with Thailand on May 7, left in disarray after the Constitutional Court demanded that the prime minister….step down …over her decision to remove the country's head of national security in 2011, in favor of a relative. "For all the pretense of due legal process and distaste at Ms. Yingluck's nepotism, this was not an offence that merited the ousting of a prime minister. Instead, the ruling is a measure of quite how far Thailand has fallen, how deeply it is divided and how badly its institutions are broken." ( ECONOMIST Everything is Broken, May 10) So, what is the truth? The truth is that Yingluck and her brother won fair elections.

However, the elite, the establishment, the "yellow shirts," are unable to accept the results of the ballot box.

What do the "yellow shirts want? To strengthen institutions like the courts and electoral commission. However, these institutions take actions that support the yellow shirts and weaken their opponents. The yellow shirt led boycott in February was supported by the electoral commission. In The New York Times, Michael J. Montesano stated that "the partisanship displayed by the Constitutional Court this week undermines the legitimacy of such bodies in a way that will be felt long after the present crisis is over."

O.K., this is what the papers say; what do the people say? The sound from the street is: "Ms. Yingluck was elected and we want elections."
The Pheu Thai party, the party of Yingluck and her brother Thaksin, are referred to as the "red shirts." Parties allied with Mr. Thaksin have won fair elections in 2001, 2005, 2006, 2007 and 2011. However, in 2008 another government that was affiliated with Thaksin's policies found itself out of office when the courts disbanded the political party that it belonged to for alleged electoral fraud; the courts removed two prime ministers who upheld Thaksin's policies, Samak Sundaravej and Somcahi Wongsawat, from office. In 2010 tens of thousands of red shirts protested in Bangkok, calling for new elections. Of the 100 people who lost their lives during these protests, most were shot by the security forces.

Paul Chambers, from the Institute of South East Asian Affairs, refers to Thailand as a "juristocracy," stating that the courts are making political decisions. "The judicial removal of an elected prime minister on political grounds is emblematic of the no-holds-barred approach of her opponents, not only in the political arena, but also in nominally independent institutions." (BBC http://www.bbc.com/news/ world-asia-27292633) It is interesting that in the last century there have been 11 successful military coups in Thailand (and seven failed attempts).
Now that Yingluck has gone, the same media organs that were blaming her for corruption and nepotism are lamenting her passing. It has become clear that the antigovernment protestors are no people's heroes.

These protestors are the entrenched upper middle classes, people who, with Yingluck and her brother's more populous style of government, lost power and influence.

During the protests against the February elections they tried to manipulate the Election Commission and the army to ensure the elections did not take place. When this turned out to be impossible (as the elections were completely constitutional) they boycotted the elections, causing such unrest that no election could be held. Now the Constitutional Court has taken the lead, ruling that Yingluck is guilty of corruption and must go. Back in Turkey, after the December events, Erdoğan stood up against the judiciary and the police. This caused shock-horror in the West, as the judiciary are perceived as the heart of justice; however, as we can see in Thailand, the judiciary can also be the heart of oppression. What is true in Berkley is not necessarily true in Bangkok or Bursa. Despite living in a global world in which we have instantaneous communication, we are being more manipulated in what we think and feel than ever before. Tweets saying "Help we are dying" set the tone for Gezi. Pictures and videos manipulated to make a few protestors seem like an army, or thousands seem like hundreds directed how we perceived events. In the Thai story we can easily replace Yingluck or Thaksin with any number of leaders from emerging democracies.

In the last few years not only have oxymoronic revolutions that depose democratically elected leaders erupted in different regions, but the media is also vacillating on how to depict these people. The truth of the matter is that if a government is democratically elected, the only legitimate way to get rid of it is in the ballot boxes.
Last Update: May 17, 2014 2:22 am
RELATED TOPICS