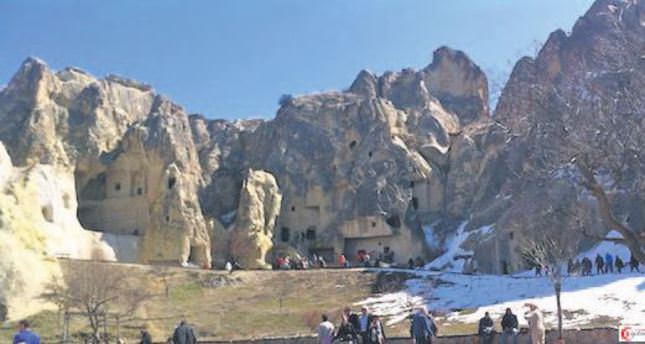 Lying at the center of the Anatolian region, Cappadocia is a miraculous natural wonder where ash and lava spouting from volcanoes were eroded by rain and wind millions of years ago to create an unusual rock formation called "fairy chimneys." Here, nature and history come together in a spectacular landscape.

Dating back to 300 B.C., Cappadocia hosts many historic and natural places. Spring is the ideal season to enjoy one of the world's most breathtaking settings. Throughout history, the fairy chimneys have been home to civilizations, where people established underground cities and churches. The unique valleys offered the necessary life conditions for people during ancient times and beyond. The surrounding countryside was called many different names.

The Persians named the enchanting region "Katpatuka," meaning "the land of beautiful horses."

Many ancient civilizations had left their traces in Cappadocia, an important transition point at the heart of Anatolia. The region is unique in the world with its history, culture and growing religious tourism. In connection with the history of Christianity, Cappadocia was the home of Christians fleeing the cruelties of the iconoclasts at the time of the Byzantine Empire.

Emperor Leo III banned the worship of icons and destroyed them in the eighth century. The prohibition lasted for 100 years. The churches and chapels are evidence of such practices.

Life in the Underground

The Göreme Open Air Museum, listed as a UNESCO World Heritage Site and the rockhewn churches surrounding the museum are must-see historic places. These churches are also known as the places where monastery life emerged. A variety of wall paintings and frescos feature interesting samples of medieval art. Two of the monasteries were built with the order of Saint Basil the Great in the fourth century. Some of the most notable places around the Göreme Open Air Museum are the Snake Church, the Santa Barbara Chapel, the Apple Church, the Buckle Church and the Dark Church.The ancient underground cities of Derinkuyu and Kaymaklı are among the other must-see places. They are built in the soft volcanic rocks and large enough to shelter thousands of people with livestock and food stores.

The underground cities consist of churches, graves, barns and storerooms. There is also a special place allocated for shriving, the holy pool for baptism and water well. No information is available about the total number of floors, yet the first eight floors are open to visitors.

The traditional houses and pigeon lofts on carved rocks are the other unique structures. The houses were constructed with face stones.
Tourism is the most important source of income in Cappadocia. The boutique hotels constructed on carved rocks draw a large number
of tourists.
Last Update: May 20, 2014 1:53 am
RELATED TOPICS