Ferryboats: Friends of the seagulls 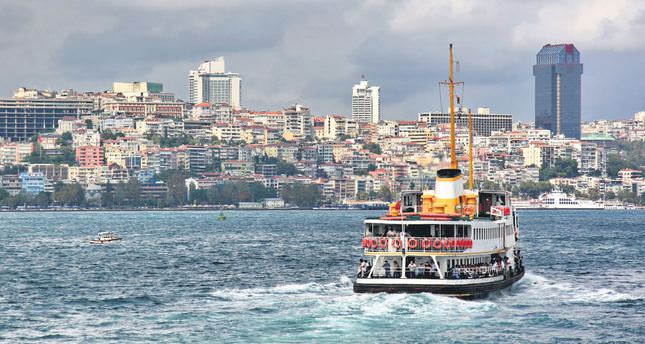 In fact, considering it is surrounded by both the Sea of Marmara and the Black Sea, and divided in the middle by the Bosporus and the Golden Horn, we can definitely call it the city of "waters."

Sarayburnu and Galata (the historic peninsula) were historically considered the main city. With the conquest of the city by the Ottomans, Eyüp and Üsküdar too became the most important towns of Istanbul. Üsküdar was an important center of trade and also accepted as the holy land for Muslim dwellers of Istanbul since it was the starting point for Hajj, the holy pilgrimage to Mecca and Medina. People therefore mostly used rowing boats to cross the Bosporus, but these were dangerous trips back in the day. Plenty of accidents happened due to strong sea currents. It is said that people visited the Aziz Mahmud Hüdayi Lodge to pray for safety before a boat trip. The churches near the Bosporus were called Hagia Nicola, Saint of the Sea. In the 19th century, the increasing demand for sea travel led to the development of a sea transportation system from row boats to steamboats called "vapor."

In 1837, British and Russian firms launched a passenger transport service with the introduction of two steamers on the Bosporus. The Imperial Treasury Ferry Administration wanted to launch its own ferryboats in response to the foreign companies and so in 1843, a steam boat called Hümapervaz was given to Sultan Abdulmecid as a gift by the khedive (governor) of Egypt.The Ottoman Empire's first corporate was a sea transportation company. Şirket-i Hayriye, founded in 1851, began operations in 1853 with the introduction of six wooden open-decked paddle steamers brought from England. They operated at 60 horsepower and could travel 6 miles an hour.

These six ferries were the beginning of the tradition of numbering ferries: 1. Rumeli, 2.Tarabya, 3. Göksu, 4. Beylerbeyi, 5. Tophane, 6.Beşiktaş. The first trip carried out by the company was to Üsküdar. After that, new routes were added and expeditions were even arranged to İzmit and Tekirdağ. In the meantime, screw steamers with wide galleries had replaced steam vessels. With the increasing number of passengers and ferries, the number of docks increased. The first ferries did not have closed decks; that is why during winter the captain and passengers endured strong weather conditions.

Finally, in 1914, enclosed areas were built for the convenience of passengers and to protect against the weather. Şirket-i Hayriye also started to operate Suhulet (Ease), the first car ferry in the world, which was built in Britain in 1869. The idea of the car ferry was the brainchild of Hüseyin Haki Efendi.

Suhulet, designed by the Hasköy Shipyard's chief architect, Mehmet Usta, provided many amenities for the Sirkeci-Harem line until 1958.
Sahilbent (joining two sides) was the second car ferry operating in the same line. It is known that both ferry names were given by the national poet Namık Kemal. In use for a long time, the ferries left their places to more modern and comfortable ferries today between Harem and Sirkeci. Two of the four new modern car ferries designed by Turkish engineers and produced in Istanbul shipyards in 2007 by the Istanbul Sea Buses Industry and Trade Incorporation (İDO) are named Suhulet and Sahilbent, once again as a tribute to the authentic ones. İDO operates the fast ferries beside the sea buses and conventional ferries in the Sea of Marmara. The fast ferries which carry vehicles also travel between Istanbul-Bandırma and Istanbul-Bursa through the Yalova seaport. People particularly prefer these lines as a shortcut to reach the Aegean and Mediterranean regions of Turkey for their summer holidays. Today, each person who lives in Istanbul prefers sea transportation to avoid the heavy road traffic.

Moreover, resident of Istanbul also use the ferries to enjoy the Bosporus.Social events such as weddings, birthdays, fashion shows or company gatherings are held on the grand boats. Tourists in particular enjoy the Bosporus boat trips to get a panoramic view of Istanbul. Relaxing on the deck of a ferry while sipping tea and munching on a simit (bagel) is a highlight for many tourists visiting the city. I recommend taking a boat trip that starts in Eminönü, a popular shopping district in Istanbul's historical peninsula. You will see the most famous landmarks of Istanbul such as Dolmabahçe Palace, Mehmet Emin Ağa Fountain and Bezm-i Alem Valide Sultan Mosque, as well as the Tomb of Hayreddin Barbarossa, Çırağan Palace and Mecidiye Mosque, generally known as Ortaköy Mosque. There are also beautiful and historical waterfront mansions. Their gardens are decked out in colorful flowers and trees unique to Istanbul.

You can also see the Bebek Mosque, which was built in neo-classic form and the Rumeli Fort can also be seen along the same shoreline.
The Bosporus boat trip can also be taken from Kadıköy to enjoy the Asian side of Istanbul, especially to see landmarks such as Üsküdar, Beylerbeyi Palace and the real Bosporus villages such as Çengelköy, Kanlıca and Beykoz. I assure you that you will enjoy the boat trip to the Prince's Islands too. There is no other place where you can travel by boat from one continent to another without your passport while remaining in the same city.
RELATED TOPICS