Turkey's Mevlevi Dervishes: An international invitation to a spiritual awakening 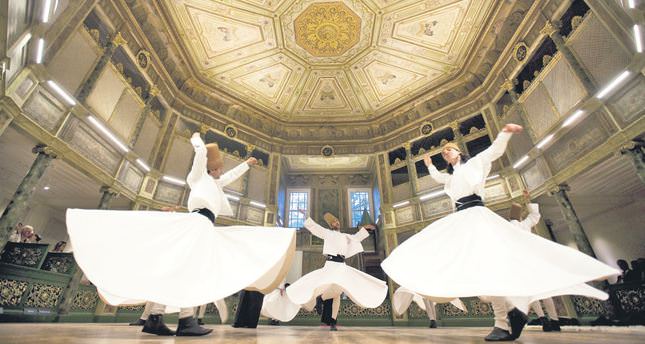 by Cameron Thomas Jun 12, 2014 12:00 am
In the crowded tourist district of Taksim, at the juncture of İstiklal Avenue and Galipdede Avenue, stands the Galata Mevlevihanesi "tekke," home to the Mevlevi Whirling Dervishes, the inheritors of the great Islamic scholar and Sufi, Mevlana Celaleddini Rumi. This weathered retreat, built for spiritual aspirants and gnostics in 1491 by an Ottoman nobleman from the palace of Sultan Beyazıt II, has become a center dedicated to displaying the arts, rituals and teachings of this Sufi order. In 2008, it was adopted by the Istanbul Art, Science, Education and Culture Association (İSBEK) and has since been organizing conferences and performing religious ceremony worldwide. Housed inside the complex: a cemetery for deceased disciples, a purification area, a meditation house and extensive gardens.

The meditation house, which is used for the sema (whirling) ritual, is not the original but a replacement of the hall that burnt down in 1765. The current building dates from 1796, experiencing extensive restorations in 1967, 1972 and a final facelift in 2008 when it was incorporated by İSBEK. The association also offers a course on Quran interpretation, literature and calligraphy.

Curiously, the serenity of this mystical site is preserved amid the raucous cacophony just outside its front gate. Passers-by can enter during certain times on certain days after paying a small admission fee. Attendees are then guided toward the sema house to view a performance of Turkey's famous "Whirling Dervishes" - disciples of a cosmic love and adherents of a spiritual tradition dating back to the time of the Prophet Muhammad.

The sema ritual is divided into seven parts, which together symbolize a mystic cycle to attain perfection. The ritual begins with a eulogy (naat) for the Prophet Muhammad (and all prophets before him), which is subsequently followed by the banging of a drum, symbolizing the Divine order of the Creator. Drumming then coincides with a musical improvisation using a reed "ney" (an end blown flute) to fulfill the third phase. This represents the first breath that gives life to everything - the Divine breath.

The dervishes ponderously file into the center of the round hall in step with the harmony of the drum and the ney, lining up and readying to begin their ascension. The fourth part is called the "Devri Veledi," where the dervishes engage in a circular walk around the center stage often pausing to bow for one another -- a greeting which represents the salutation of soul to soul masked by body and substance. After this, the sema begins, a testimony to the existence and unity of God practiced in order to gain rapture and annihilate oneself in spiritual ecstasy. The ritual respectively requires a ceremonial reading of the Quran and a prayer for the peace of the souls of all the prophets and believers in order to complete the sixth and seventh aspects and the ritual as a whole.

This performance, which runs about an hour, is actually an incredibly shortened version of an authentic sema ritual. Traditionally these tekkes would have had a much broader curriculum including Arabic, Farsi as well as Islamic jurisprudence, Quranic exegesis and tassawuf (the science of Sufism). Traditionally, the Islamic prayer was also practiced in the mediation hall. Abdurrahman Tavruz, leader of the Mevlevi Dervishes and the "conductor" for the performance says that every aspect of the spectacle contains symbolism. The white dervish garb, much like a long robe, represents a "kaftan," the white robe Muslims are wrapped in before they are buried and the tall hats represent headstones of a grave. Tavruz explains that the love for God that exists with these gnostics makes them yearn for a meeting with their Lord and the only way they can achieve this is through a metaphysical "death" - the death of one's desire or lower self. "If I educate my ego I can die now," says Tevruz, quoting a saying of the Prophet, "You should die before you die."

On the surface, the sema performed by Abdurrahman and the other disciples may seem to many an entertaining performance, possibly even superficial, but Abdurrahman assuredly states: "We are trying to follow the Prophet 'peace be upon him' and his inheritors. How do people know [that during the performance] I am not making dhikr [remembrance of God]?"

The Mevlevi dervishes travel all around the world, exporting their knowledge of Sufism and Islam. "All people want to meet God, all around the world," Tavruz claims. "We are all asking the same questions" - questions of existence and our place in the universe - and God reassures us in this endeavor by telling us, "I was a hidden treasure and wanted to be known."
Last Update: Jun 12, 2014 1:40 am
RELATED TOPICS