Lasting to the finish: Endurance 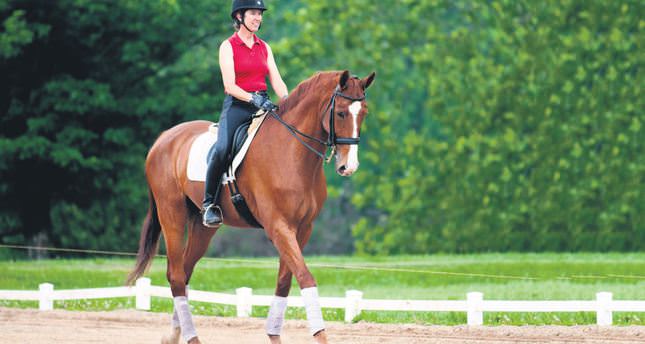 The horse has always occupied a special place in Turkish history and culture. The new sport of Endurance Racing is proving popular as it helps people to rediscover this connection

I spent much of my childhood in the saddle, or longing to be in the saddle. Horseback riding was my great passion, and I pursued it whenever I could. However, upon moving to Turkey, I turned my back on the sport. I had young children now, and without transport to get to and from the stables, riding just wasn't feasible. Six years ago a friend who wanted to start riding dragged me to a stables. Since that day, I have been trying to ride, on and off, whenever I can. Growing up in the United States, riding was the sport of cowboys; it belonged to the people, and anyone could do it, without spending a fortune on fancy gear. You could gallop through the hills, jump over rivers, feel the wind on your face, all for a small fee. But in Turkey I saw that everyone was in shiny boots, spanking new jodhpurs and a luxurious velvet hard hat.

The price of such equipment here makes this is a serious investment, and once you have made it, you feel compelled to go on. If the student wants to buy their own horse, this is even more of an investment, with the most basic horse starting at a price of around 30,000 euros.

However, a few years ago I met Efe and Yasemin Çehreli, who run Sırapınar Country Club. They have a different approach to equestrian sports. Efe started riding in 1998 as a hobby. But he was dismayed that this was a sport for the elite, and anyone who did not have the money to purchase a potential champion was scorned. He knew that horses run in the blood of Turks; in Turkish history the horse was a revered and treasured companion. But what Efe saw was that the horse had now become a vehicle of status, being divorced from its historic past.

Efe and Yasemin decided that the best way to break this stranglehold on riding was to become involved in the Equestrian Federation of Turkey. Efe became a licensed rider in 1998 and in 2006 qualified as a judge for show jumping competitions and then for dressage competitions, finally qualifying as a judge for endurance races. In 2013 Efe was appointed as a member of the endurance committee by the president of the Equestrian Federation.The Çehrelis passion and leading cause is the promotion of endurance riding. Endurance riding is different from show jumping or dressage; it is a race over 20, 30 or more kilometers.

The winner is not who crosses the finish line first. All the horses start together; when they have finished the race they have two minutes to check in with a veterinarian. If the horse's pulse is over 44 beats per minute, one point is added to the finishing time for every beat over this rate. If the horse is not brought to the veterinarian in the first two minutes after the race, every extra minute is one point added to the final time. The winner is the horse and rider who has the quickest time after all the penalty points have been added. As a result, this isn't a race completed at a full gallop; to avoid a fast pulse, the riders walk, trot and canter, sometimes dismounting to run alongside their horse. They are always aware of the condition of their horse; indeed, in endurance, the condition of the horse is the over-riding concern.

The other advantage of endurance is that, unlike show jumping or dressage, it is inexpensive and open to all. To be a champion show jumper the investment in a horse is enormous - a good show-jumper can cost as much as 1,000,000 euros. These horses require special care and training, incurring great costs for the owners. But an endurance horse can be a village horse bought for TL 500. In fact, last year's Turkish champion took care of his horse in his own garden.

Perhaps it is for this reason that worldwide the sport of endurance riding has become the fastest growing sport in the world, with a comparable growth in Turkey. In Istanbul there is a total of 50 stables, seven of which provide training in endurance.

To become a licensed endurance rider is also very straightforward. There is a written test, which requires knowing the rules of riding and basic information about the horse. Then there is a short riding test, demonstrating that the rider can control the horse. Finally there is a 20-30 kilometer test; the important thing here is for the rider to finish with their horse, and the horse should be in good condition.So what do you need to become an endurance rider? You need to be fit and weigh less than 80 kilos (the horses are small, generally Arab mixes, as these are sturdy resilient horses). You have to be able to ride for a minimum of five hours and be able to dismount and run alongside your horse. Because of this requirement, endurance riders do not have any strict dress codes, unlike dressage or show jumping; as Efe says: "The regulation dress is a hard hat, and then something comfortable.Sports shoes or boots, either are ok. You can wear a tracksuit if you want. But if you turn up in a ball gown, the judge will disqualify you."

The races can have as many as 60 or more horses participating. As they all start at once, you can imagine the rush to be first off the finish line, much like in a bike race. But the important thing is not to be first; it is finishing with a horse that has not been exhausted.

Reading this, it is possible to think that endurance is a new sport; but, as Efe is quick to point out, it is actually the oldest equestrian sport. Throughout history, soldiers had to travel miles on their horses, as did nomadic people. The Pony Express in America was similar to endurance riding, although in this institution the horses were often ridden into the ground. In fact, in America today there is an endurance race based on Pony Express routes.

Endurance racing has broken the elite stranglehold on equestrian sports. Through this sport people are discovering the joy of riding, which truly lies in making a connection with another animal, and being outdoors, in the sun, the wind and the rain. The fact that the overriding concern in endurance is the health of the horse means that the rider has a more enjoyable experience; when the horse is happy there is a bond between rider and horse, and this is what makes riding special.
Last Update: Jun 14, 2014 1:47 am
RELATED TOPICS