Fountains as precious as water 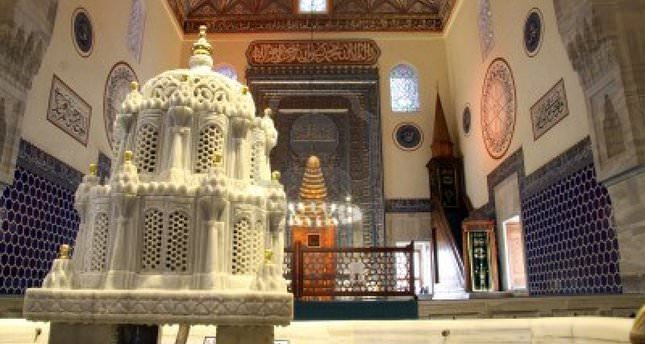 The Ottoman Empire often built fountains in public areas making them an indespensable focal point of every neighbourhood. Almost every fountain in the country has a story to tell

"One day while Sultana Rabia Gülnuş, wife of Sultan Mehmed IV, was passing by Azapkapı, she sees a little girl crying in front of a simple water fountain. Sultana approaches the delicate girl and inquires as to what makes all those tears flow. Without raising her gaze, she points to her broken jug and whispers, "It's broken." Sultana offers the grief-stricken girl some money in hope of solving her problem, but is surprised by her refusal to accept it. "No thank you. I am not sad because the jug is broken, but rather because I am now not able to take any water home," she replies. Sultana is intrigued by the little girl's sadness. She soon finds out her name is Saliha and offers her assistance. They walk home together to meet Saliha's mother. Sultana sees that they live in poverty. Impressed with Saliha's sense of responsibility, Sultana offers Saliha a place in the palace so that she may receive an education and a better opportunity in life. Saliha's mother, saddened by the offer but grateful for the opportunities that lie ahead, accepts the offer and says farewell to her daughter.
Sultana gives the young, flourishing girl special attention and cares for her life on her own. When the young girl reaches the age of wedlock, Sultana encourages her son, Şehzade Mustafa (the prince), to marry the honest and intelligent Saliha.

The little girl that once sat by a water fountain weeping for her broken jug becomes Saliha Sebkati Sultan, the wife of a prince. The day arrives in which the prince must take the throne. The young man who is forever respectful toward his mother and in love with his wife, honors the two women by renovating the fountain where they met by building a marvelous fountain compatible with the architecture of the Tulip Era.

This is the authentic story of Saliha Sultan Çeşmesi (Sultana Saliha Fountain), which is in front of the Sokullu Mosque at Azapkapı in Istanbul. It is one of the most beautiful fountains built in Istanbul during the Ottoman Empire (1733).

Building new fountains in Istanbul alone was not enough to satisfy Sultana Saliha; she also asked craftsmen to repair the broken fountains in the city. Istanbul has been home to "civilizations of water," such as the Roman, Byzantine and Ottoman empires - the most important and leading builders of waterworks throughout history.

Since the Roman era, waterworks have been improved and Istanbul has become best known for its aqueducts, cisterns, baths and fountains. "Istanbul is the only city that is capable of competing with Rome. Hasn't Istanbul already been called Nova Rome (New Rome), Deutere Rome (Second Rome) anyway?" asked Professor Haluk Dursun in his book "Istanbul'da Yaşama Sanatı" (The Art of Living in Istanbul).

Due to the great, significant role of Islam, in particular, the use of running water, which is considered clean for the purification of the body before prayer, became a very important aspect for Ottomans. Furthermore, according to Islam, sadaqah jariyah (continuous charity), which includes any charity that continues to bring benefit to people, animals or the environment over time and for as long as it does so, brings reward to the donor: Education, orphans care, clean water and the planting of trees are considered acts of piety. Hence, sultans, members of the Ottoman dynasty and important wealthy governors, such as viziers, adorned the city with beautiful fountains.

There are plenty of imperial fountains or sebils (kiosks for the distribution of drinking water to passers-by in cups) in Istanbul. One of the most magnificent fountains is the Ahmet III Sebil and Fountain, which lies in front of Bab-ı Hümayun, the first gate of the Topkapı Palace at the center of Ayasofya Square. The fountain, built by Sultan Ahmet III in 1728, features architectural and artistic wonders, such as floral motifs, muqarnas (a three-dimensional Islamic decoration), calligraphy and hand-painted vases. It was built when Western influence was at its peak.

It shows the transition from Classical to Baroque architecture. There is also an inscription on the fountain that is written in calligraphy: "Turn on the tap in the name of Allah (may He be glorified and exalted), drink water and pray for Sultan Ahmed."

There is another Ahmet III Fountain at Üsküdar Square, which is located across the quay and near the shore, built in 1728. It is made of solid marble. There are verses by the famous Divan poets, Nedim, Rahmi, and Shakir on the sides of walls and also verses inspired by Ahmed III and his son-in-law, İbrahim Pasha of Nevşehir, written in calligraphy. A number of vases on which tulips, roses and chrysanthemums are used as motifs to decorate the side of the fountain.

Across from the Mausoleum of Sultan Ahmed I, there is another imperial fountain called the German Fountain. It was constructed to commemorate the second anniversary of German Emperor Wilhelm II's visit to Istanbul in 1898. It was built in Germany, then transported piece by piece and set in its current place in 1900. The Neo-Renaissance style of the fountain's octagonal dome features eight marble columns, and the dome's interior is covered with golden mosaics with the tughra (symbol/signature) of Sultan Abdülhamid II and symbol of Wilhelm II. The arches of the fountain show the friendship between Turkey and Germany. In addition to fountains and sebils, selsebils - ornamental cascade fountains located in the gardens of grand homes or on walls - were also popular in Istanbul. With the selsebils, the water poured either into a final large basin or garden pool. They were not used for supplying water needs, but as a decorative feature. The sound of pouring water was also used as a means to prevent any confidential dialogues from being overheard while cooling the air. Today, they are mostly found in the gardens of homes, but if you want to see a nice authentic one, a visit to the garden at Yeşil Ev (Green House) restaurant in Sultanahmet is highly recommended.

Not all the fountains in Istanbul are mentioned here. There are many other amazing fountains set all around the city. Some of them are simple, small fountains, but most of them are such amazing masterpieces that they cannot be considered as built only for water supply.
Today, these magnificent monuments reveal the elegance of a water civilization and the sense of aesthetics of our glorious ancestors.
Last Update: Jun 16, 2014 1:05 am
RELATED TOPICS