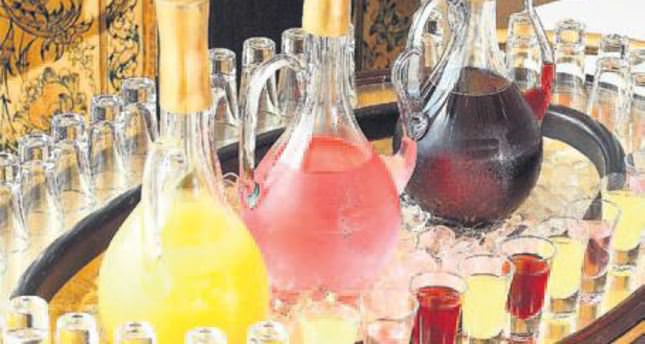 Since the begining of the 20th century Ottoman Turks have been celebrating with sherbet. Made with flower petals, herbs and spices mixed with fruit, sherbet was known to be the drink of not just the Sultan, but also a drink enjoyed by the people

Give me a sun, I care not how hot, and sherbet, I care not how cool, and my heaven is as easily made as your Persian's," said Lord Byron, an English poet during his visit to Istanbul in 1813.

Sherbet is made from fruit juices or extracts of various flowers, fruits and herbs, combined with sugar and water to form a sweet syrup that is diluted at a later time with water, ice or snow. Served cold, sherbets are often made of rose, sandalwood, lemon, orange, mango and pineapple. Besides Turkey, sherbets are very popular in India, Iran, Afghanistan, Pakistan and Bangladesh and has been one of the most widespread drinks in the Muslim world.

The reason for sherbet's considerable popularity is that there were few means of preserving fresh fruit until the beginning of the 20th century. Refrigeration was available for the very rich alone.

Thus, fruits remained seasonal except when they could either be dried or liquefied in the form of syrup. Before modern drinks, sherbet had been drunk as a refreshing beverage for centuries especially in eastern countries with hot climates. It spread into the Balkan area and other Western countries during the Ottoman Empire where people drank sherbet before and during each meal. When a sultan had a son, guests who came to see the baby were served with sherbets which were made of a wide array of ingredients and poured into golden, silver and crystal flasks. In the gardens of the Ottoman palace, spices and fruits to be used in the beverage were grown under the control of pharmacists and doctors of the palace.

Again, the sultan filled every bowl with gold and sent them back. Thus, sending a bowl of sherbet and receiving a bowl of gold in the same season of every year became a tradition, even at times of war, the janissaries sent those bowls and expected gold in return.

Today, in rural areas of eastern Turkey, the groom's family comes to the bride's house after the dowry is agreed upon and brings a flask with sherbet for the bride to drink as a sign of acceptance of the groom. Sherbet is served during not only marriage but also births and circumcisions.

A colored sherbet flavored with cloves and other spices is offered to visitors after the birth of a child. It is possible to see at historical sites some sherbet retailers selling it on the streets in the traditional way. On their backs, they carry a big brass flask with a long nozzle and hold glasses in their sash or use brass cup-holders. For a customer, they rinse a glass with water then they bend forward and pour delicious sherbet into the glass from the spout that curves over their shoulder.

Besides its refreshing taste, sherbet also has many health benefits such as lowering cholesterol, losing weight, relieving the stomach and intestines, regulating blood pressure and preventing thyroid. It makes the skin smoother and is very effective in removing radiation from the body. Sherbet is a blend of many fruits and spices which makes it a remarkable anti-oxidant also. The delicious beverage can be made and enjoyed at home using syrups available at many markets or made from ingredients such as lemon and orange blossom extract.
Last Update: Jun 24, 2014 2:18 am