Karagöz, the funniest man of shadows 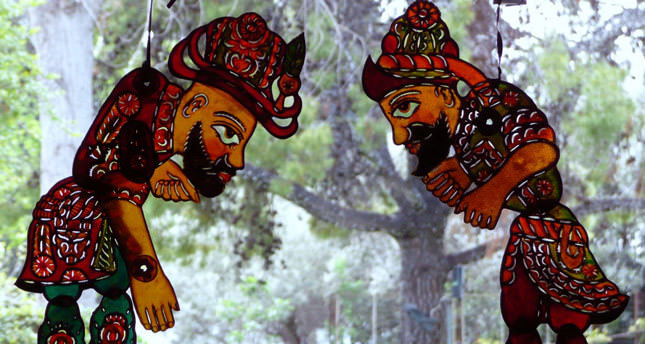 Ramadan is a holy month for Muslims across the world and a reminder of three things: the drummers that wake you up for suhur (pre-dawn meal), the hunger pangs that remind us of the less fortunate and the Karagöz and Hacıvat shadow theater. After iftar (special meal for breaking the fasting) while the elders pray (prayer performed exclusively in Ramadan), children watch "Karagöz and Hacivat," the shadow puppets play.

Karagöz is one of the most famous shadow theater plays in the world of puppetry. A white curtain called an ayna (mirror) is lit by a sema (candle light). The puppets are made from camel or cowhide that is joined at the limbs for movement and played by a puppeteer known as a hayali (imaginary). Karagöz is the main character of the play.

His sidekick is Hacivat. Other characters in the play include Chengi (dancing girl), Bebe Ruhi (Dwarf) and Çelebi (gentleman). There also some other characters from different parts of the Ottoman Empire like Arabs, Jews, Armenians, Greeks, Persians, immigrants and Albanians speaking with their accents. İstanbul was unique and the richest source for the Karagöz shadow play with its diverse people and varied cultures, beliefs and traditions. Since Karagöz's curtain is known as "the mirror," the play reflects all aspects of Istanbul to the spectators.

For instance, it was very usual to see the heads of three religions such as an imam, priest and rabbi in the play, as you can see mosque, church and synagogue in the same neighborhood in the city. They were the most respected characters, and they appeared very neutrally on the curtain so that the believers of each religion didn't feel discriminated against.

Karagöz is an illiterate person who is unemployed and nearly broke. For this reason, he is always bickering with his wife. In hope of solving his unemployment problem, which is taking a toll on him, he is in a constant search of a solution. He is very quick to get angry, a man of his era.

Contrary to Karagöz, Hacivat is an educated person who graduated from theological school. He speaks pure Ottoman Turkish and tries to educate Karagöz. He often gives advices to Karagöz about finding a job as well.

The Karagöz play tackles various subjects from everyday life to public morals. The plot is presented through arguments between Karagöz and Hacivat, and the message of the play is given in a humorous way.

Undoubtedly, the Karagöz play is a very difficult theater play since the puppeteer has to do everything on his own, such as making different sounds for the different puppets, singing Turkish folk songs, speaking Turkish well, reading poetry well, listening to spectators' comments during the play and giving appropriate feedback on time via the puppets. But the most important job is the act of improvisation. He must have a great imagination so that he can create spontaneous dialogues and create new situations.

The most speculative thing about Karagöz and Hacivat is whether they actually lived in the past or are they only fictional characters. There is no certain answer, but there are various rumors about the existence of these two friends.

According to one story that is assumed to be the most accurate, after the conquest of Bursa by Ottoman Sultan Orhan, the sultan ordered that a mosque be built in his name. Karagöz and Hacivat were working at the construction site. They were usually making jokes and telling stories. Other workers listened to them and laughed at their dialogue. Due to this entertainment, the construction of the mosque was delayed and the sultan became angry when he learned that these two friends were the reason for the delay.

Finally, he ordered their executions. Meanwhile Şeyh Küşteri, (the creator of the Karagöz shadow play), while working as clergyman in Bursa and using a shadow screen in order to teach his students about God and the spirit, learned about the unfortunate end of these two men.

When he heard about the sultan's regret about executing Karagöz and Hacivat, he then set up a curtain and animated these two friends and their conversation in front of the sultan.

Today, there is a Karagöz House opened by the Union International de la Marionette (UNIMA) in Bursa where it is believed Karagöz was executed.

There are shows performed in a small hall, and there is also an exhibition room. Karagöz House also hosts Ramadan celebrations.

Ottoman sultans and the members of the dynasty enjoyed watching these shadow plays as well, especially during the holy month of Ramadan or special occasions such as weddings or circumcision ceremonies. The puppeteers were extremely careful while performing in front of the sultan not to make jokes about delicate matters such as politics, and of course, they honored and respectfully praised the sultan.

Here is one of the anecdotes from Ünver Oral's book "Turkish Shadow Play Karagöz" that happened while Hafız Bey, the famous puppeteer, was performing the play titled "Karagöz's Squirearchy" in the presence of Sultan Selim III.

In the play, Hacivat buys male and female slaves. He brings them to the home of rich Karagöz. In the meantime, Karagöz speaks to his slave named Selim:

Karagöz had forgotten that the sultan's name was also Selim.

The sultan replied in a loud voice, saying, "Yesssss Sir!" As an experienced Karagöz puppeteer, he did not panic and immediately acknowledged his grave mistake. He brought Hacivat before Karagöz and made him speak:

"Ohh Karagöz! You have blurted out a wrong word! It cannot be forgiven! Now you must quit this profession and go on the Hajj!"

Although the sultan insistently said, "I am not offended! I just wanted to banter. Go on, play!" the puppeteer was not convinced and said, "May God give you a long life! You have forgiven me, but this is very unseemly! I besmirched my reputation," and he never again played Karagöz.

Karagöz shadow theater is one of the most important treasures of Turkish traditional entertainment art. Despite various countries' claims about its origin, in 2009 UNESCO indicated that "Shadow Play Karagöz" is a part of Turkish culture and part of the intangible cultural heritage of humanity.

Hence, I strongly believe that today we must keep Karagöz alive and update it. In doing this, we can preserve cultural values while Turkish folk songs can convey moral values via Karagöz to coming generations.
Last Update: Jul 05, 2014 7:50 pm
RELATED TOPICS