Burgazada offers a true island escape from the city 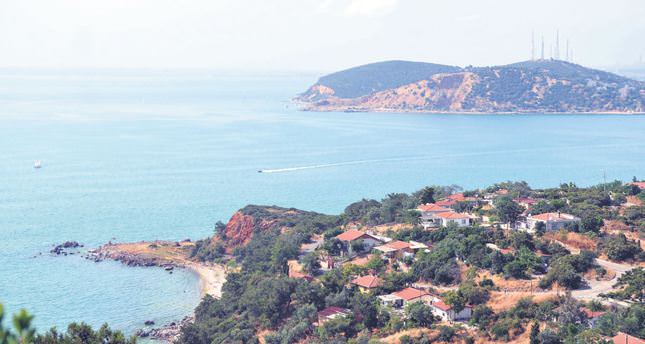 For an escape from the sweltering summer of the city, head to Burgazada, a unique destination where you can experience tranquility and a slice of life on the Prince's Islands

Burgazada, the third largest of the Prince's Islands, is as they would say in Turkish, "Ada gibi ada," which means "an island that is truly like an island." This is the precise attraction of this precious island off Istanbul's Marmara coast. Less touristic than its Prince's Island neighbors, Burgazada offers beaches and history while also granting the chance to mingle with the locals in a peaceful respite from the city.

Burgazada is almost a perfectly round island which consists of a single hill 2 kilometers across. Many Istanbul residents will cite this island as being their favorite for its ideal combination of nature, history and community. In Burgazada, everyone knows everyone; a sense of a long-forgotten community that is evident amongst this island's rustic charm and relaxed atmosphere.

Once named Antigoni by the successor of Alexander the Great who built a fort on the island, Burgazada also has a rich history and the remnants to prove it, including a series of Byzantine monasteries and Greek Orthodox churches. The island also has a synagogue, a mosque and an Alevi cemevi, testifying to its rich multicultural Ottoman history of communities and traditions. Even Evliya Çelebi, the famous 17th century Ottoman traveler and writer mentioned the blend of Armenian, Greek and Jewish cultures present on the island.

During the days of winter the population is approximately 2,000, yet in the summer the island's residents are 10 times that, the majority of which are of Turkish or Greek ethnicity, including many wealthy Turkish people who moved to the islands in the 20th century.

There are no vehicles on the island so the main mode of transport is bicycles or horse-drawn carriages. The island is easily conquerable on foot and discovering its streets lined with elegant wooden pavilions, pine trees and wisterias is definitely part of its charm.

For a swim and the ultimate tranquil escape from the city, head to Düşler Sahili (Shore of Dreams), which has a steep climb down to a quiet and rocky beach where pine trees meet the sea. If you continue further on the road, you will reach Madam Martha Koyu, a long stretch of sandy beach where you can lie on one of the numerous sun lounges. Services are primitive and limited to a hut serving tea and coffee. Sometimes people even camp out on the beach. In either case, it would be wise to pick up snacks after you arrive on the ferry and the perfect place to do so is at Ergun Patisserie, a favorite among locals, revered for their napoleon pastries.

If you want to combine swimming with a relaxing meal in a rustic tavern amid trees overlooking the sea, head to Kalpazankaya (Counterfeiter Rock). This popular traditional summer restaurant was named after a famous rock on the coast it faces where counterfeiters from the Byzantine era would stash their goods. In the 1970s, the hidden forest restaurant and the seaside were popular with hippies who would camp out there.

Now, it is famous for its tandir kebab, lamb that is slowcooked in a well and then sealed with clay. Although it can be slightly pricey and packed on weekends, it is still a favorite location for locals to waste away the days or evenings in front of a stunning view overlooking Yassıada and Sivriada.As for the island's historical landmarks, the Greek Orthodox Church of Hagios Ioannis Prodromos (St. John the Baptist), whose dome dominates the landscape as you approach the island by ferry, stands on a Byzantine monastery built in the ninth century.

The present church however was built in 1896 and is still actively serving Turkey's Greek community on the island. Make sure to check out the dungeon where St. Methodios was held captive for years.

Take the climb up to Bayrak Tepesi (Flag Hill), previously known as Hristos (Christ) Hill, where the ninth century Byzantine Monastery of Metamorphosis once stood, located at the highest peak of the island. By the end of the 18th century, it was an abandoned ruin and all that remains now is a 19th century church; however there are four vaulted underground cisterns. The panorama vista from the hilltop is spectacular, offering a view of all the other islands of the archipelago as well as the Asian shore of the mainland.

The former monastery and Church of Hagios Georgios (St. George) is on the northern shore and also boasts a superb view of the island's natural landscape of wild pines and flowers. The monastery dates back to the Byzantine era; however, the present church that stands was built in 1897.
The sole museum on the island is the home of one of Turkey's most beloved short story and poetry writers Sait Faik Abasıyanık (1906-1954) who resided on and drew inspiration from the island.

The best way to end a day on the island is to enjoy a meal of fish and mezes at one of the quayside fish restaurants.

Barba Yani has had a long legacy on the island, while Fincan has become a new favorite. Both are famed for their wide variety of mezes. To cap off your day pay a visit to Sinem Dondurma, the island's famous ice cream parlor located just across the ferry port.

How to get there: Burgazada can be reached by ferry, seabus and motorboat from Kabataş, Kadıköy and Bostancı, with services running later on weekends and in the summer. Bikes are available for rent on the island at Ertan Bisiklet.

Where to stay: Öğretmen Evi (Teachers' Lodging) for basic accommodations and large apartment-style rooms. Mehtap 45 is a boutique hotel featuring rooms with views and Villa Mimosa offers a stay in a historical wooden kiosk.
RELATED TOPICS