Reboot the mind with a midday nap 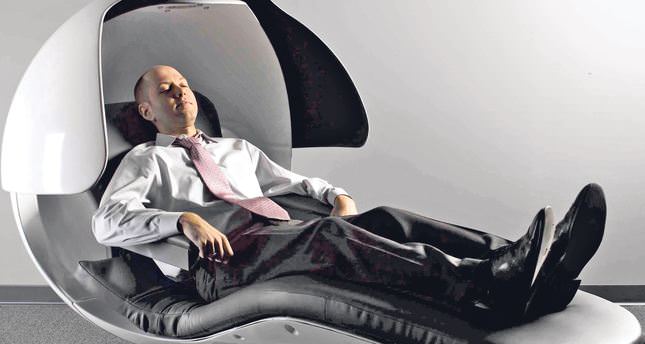 are long and workplace expectations are high. Without a break to recharg the mind productivity levels can decline. Some of the world's leading companies have resolved this issue by giving their employees time to nap to recharge their mind and body

There is no replacement for getting a full night's sleep - neither coffee nor other stimulants - but you can cut corners by napping. In the capitalist world, new ways to improve employees' efficiency are being thought of every day, and a nap room has become one of the latest "productivity boosters."

Napping is for preschoolers, but it is now becoming more fashionable among big companies. As more people are failing to get adequate sleep at night, companies have created nap rooms for employees to rest, hoping to increase their efficiency at work. Top executives of companies generally try every possible and acceptable thing in order to make their employees more productive - and it seems nap rooms are the latest craze in corporate America.

Many global companies like Google and AOL use "EnergyPods" produced by MetroNaps. EnergyPods are specially designed chairs for napping in workplaces which are used by companies in 20 countries across four continents. In companies where napping is thought to be beneficial for employee morale and effectiveness, it is quite common to allow a tired employee to take a short nap break. "Sleep makes us more productive, creative, less stressed and much healthier and happier. Even a 20-minute nap in the middle of the day can make a huge difference. I grew up thinking that if you work around the clock, you are going to be more effective, and I realize that is not true,'' Huffington Post founder and president Arianna Huffington told Today, a news agency.

How can napping at a workplace make job performance better? It is a fact that sleeping is part of the job if it is stressful and requires intense concentration.

For instance, if you are an airline pilot, you are required to have a certain amount of time between flights to get adequate sleep. Also, there are some time limitations on how long commercial bus drivers can drive without a sleep break. Doctors and air traffic controllers are allowed to take breaks and naps to keep their performance high.

Tiredness and sleeplessness can result in errors that these occupations cannot accept because they can lead to accidents and fatalities. Many studies show most people start to suffer from a lack of energy sometime between 1 p.m. and 3 p.m. and that not only pilots and doctors, but also other working people, no matter what their occupation, need to nap. Your body clock tells you when to sleep and when to wake up, and it wants a nap in the afternoon. However, the human body needs only a short nap in the afternoon as opposed to a full night's sleep cycle.

In Tokyo, Japan, a women-only "nap cafe" opened seven months ago as a haven for women who want some peace and quiet in the middle of a busy day. The "nap cafe" includes a shop and a kitchen where women can relax and rejuvenate. Tokyo may be one of the first big cities to feature public areas for napping.

Napping is not something new. It is known as a 'siesta' in the Spanish speaking world and 'qayloola' in many Arab countries. One of the most famous nap takers was Buckminster Fuller, the inventor of the geodesic dome among other things. Buckminster Fuller was reported to work around the clock by sleeping only half an hour every six hours. This kept him both highly productive and creative. Thomas Edison, Albert Einstein and Leonardo Da Vinci, were also reported to nap in order to stay productive and creative. Winston Churchill was another firm believer in the nap. "You must sleep sometime between lunch and dinner.

Don't think you will be doing less work because you sleep during the day. That's a foolish notion held by people who have no imaginations. You will be able to accomplish more. You get two days in one - well, at least one and a half, I'm sure," said Churchill.

A recent study made a comparison between caffeine and napping, and placebo conditions on three types of memory: visual, motor and verbal. Verbal and motor skills decreased with caffeine, while napping improved performance across all three areas. Employers need to throw away the coffee machines and support their employees by allowing them to nap, and trust napping practices.

Napping is a win-win practice for both the employers and employees and is economically and medically advantageous in the long run.
RELATED TOPICS