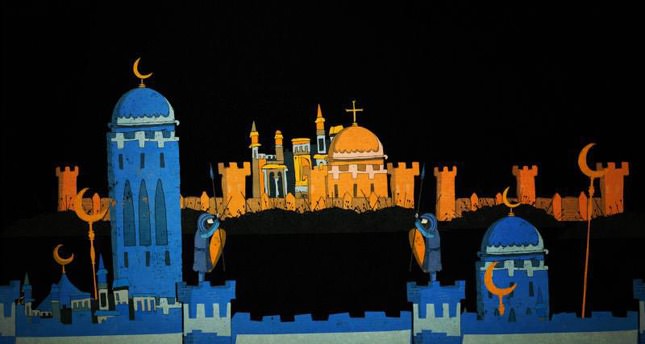 A novelist expresses her love of Turkey, Islam and Ramadan

The sun has set. Above the whirr of engines, bus brakes, and squawking gulls, I can hear the ezan sailing across the Golden Horn from Fatih and Yavuz Sultan Selim Mosques. I look out the window toward Süleymaniye, my favorite monument on the opposite shore. Süleymaniye's four minarets and the mosque itself are brightly lit, as always, but between the two upper minarets shines a banner for Ramazan lights. With my antique Soviet binoculars, I can even read it: "O fast, keep us!" This play on words is a request for divine help in keeping the fast, which is always difficult, but even more so in summer.

Whenever I mention my enthusiasm for Turkey to Americans and Europeans, I hear things like, "Turkey? Isn't it dangerous?" or "I'm afraid to take my kids there." When I ask why, the reluctant response will be: "Well, it's Muslim."

Yes, Turkey has a vibrant Muslim heritage. As an Orthodox Christian, that's part of the reason I enjoy it so much. I love hearing the call to prayer five times per day, reminding me that there is something else beyond the traffic and bustle, something hovering above the placid Golden Horn, the ships in the Bosporus, the coffeedrinking young people in the narrow streets of Galata, the hijabi women in conservative Fatih, and the gypsy children half-playing and halfbegging in the busy avenues of Şişli. The ezan reminds me not only of what is always beyond us, but also of the quiet within us, even when we find ourselves caught up in the insanity of the world's fifth largest city. Yet Islam is not just exotic chanting, beautiful calligraphy displayed in museums, and colorful tilework. It is an everyday experience.

During my many extended stays in Turkey I have been invited to dinner or tea in the homes of people whom I have only just met. I have been accompanied to my destination more than once after having lost my way. I have been summoned by bus drivers when I was about to miss my stop, was assisted by a policeman when I couldn't figure out how to use a ticket machine, and was even driven across a village by a busy friend at a moment's notice.

Let me explain why. Good deeds are a requirement of Islam. Giving a stranger directions, ensuring that harm does not come to him, and treating him to a glass of tea are all good deeds.

According to Islamic tradition, the good deeds that one performs can outweigh one's sins on Judgment Day. One of my friends, a non-Muslim who was born in Istanbul but who has lived for decades in the U.S., made a trip home last summer and treated herself to a night in an exclusive Bosporus hotel. When she arrived, she was both fatigued and suffering from health problems. She took the elevator to her floor and began walking to her room, but it was so far down the hallway that she gave up, returned to the reception, and requested something more accessible. The hotel, however, was full, and another room of the same type was unavailable. Seeing that she was indisposed, the receptionist handed her a new key without comment. This time she took the elevator to the top floor, located her new room very close by, and opened the door to the Presidential Suite.


Could the receptionist have made a mistake? My friend sank into one of the room's twenty chairs, looked out through the floor to ceiling windows at the Asian shore shining like bronze in the late afternoon sun, and realized that no, it was not a mistake. It was a good deed.

During Ramadan, the good deeds multiply. Last summer I spent part of the Muslim holy month in Mustafapaşa, a quiet Cappadocian village where I have made many friends. Most villagers were fasting, but still my elderly "aunt" fussed over me and insisted that I drink tea and water whether we were in her house or out visiting someone else.


Another fasting friend took me to Mustafapaşa's Orthodox Christian cemetery at six o'clock on a hot, dry evening. On the way home we visited the site of a destroyed Orthodox church. My friend raised her hands and prayed. Later that evening, she told me that she had asked God to reconstruct the church. "The prayers of a fasting person are always heard during Ramadan," she said, "especially at the end of the day, just before we break the fast."

Of course I do not mean to say that everyone you will find in Turkey is a good Muslim. The swindlers loitering outside the Blue Mosque and flagging tourists with the greeting "Hello, where are you from?" are not to be trusted. Like any big city, Istanbul has its purse snatchers, pickpockets, conmen, and worse. But don't be afraid to trust the shopkeeper who takes you halfway down the street in order to make sure that you go the right way. He is doing a good deed. Whether he is a practicing Muslim or an atheist, good deeds are a part of his cultural heritage. And if you can surpass your prejudices and board a plane to Turkey, you too may realize that there is kindness in Islam.
Last Update: Jul 11, 2014 2:05 pm
RELATED TOPICS