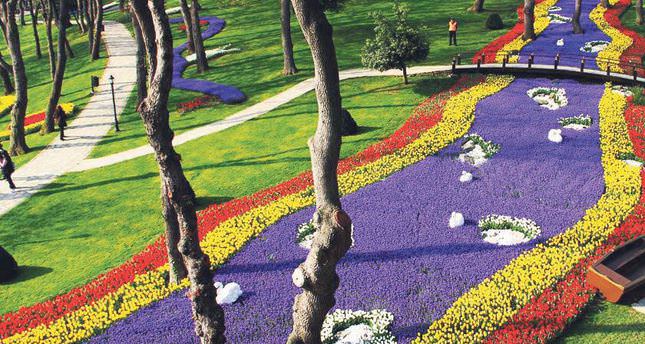 Summer is when the grass is greener, the birds chirp louder and flowers make everything look brighter. Istanbul has some amazing parks to escape the city's hustle and bustle

It is perfectly true that living in a big city has its disadvantages as well as advantages. If you live in a metropolis, you may get sick of the dense population, traffic jams, pollution and so on.

But you can easily throw yourself into a nearby park, a green space that can put all the metropolitan chaos behind you. New Yorkers have Central Park, Parisians have Bois de Boulogne, Londoners have Hyde Park and Tokyoites have Ueno Park. What about the folk of Istanbul? Istanbul boasts many large and small parks, some date back to the Ottoman Empire era. Below is a sample of interesting parks and gardens in Istanbul.

Yıldız Park in Beşiktaş was constructed by Sultan Selim III in memory of his mother. It was a part of the imperial garden of Yıldız Palace and it was reserved only for palace dwellers during the reign of Sultan Abdülhamid II. Today Yıldız Park is a lovely park complex which includes a broad range of flowers, plants and trees which were collected from around the world. The park also offers panoramic views of the Bosphorus. In the park, there are two old pavilions named Çadır pavilion and Malta pavilion, which are used to rest, drink tea, eat breakfast and have lunch. Located in Eminönü, Gülhane Park is among the most famous and visited parks of Istanbul. There are gardens, pools and recreation areas in Gülhane Park. It was once part of the outer garden of Topkapı Palace and built to grow roses; that's why it was named Gülhane meaning rose house. The first statue of Atatürk in Turkey was erected in this park in 1926, sculpted by Heinrich Krippel.

Beykoz Grove is located in the Beykoz District on the Asian side of Istanbul. The grove dates back to Sultan Abdülhamid II. It was designed by French landscape architects, and pavilions, pools, theaters and birdhouses were built in the park. Spanning over 27.9 hectares, Beykoz Grove is one of the largest groves on the Bosporus. Today, there are two big caves, five pools and a palace ruin in the grove.

Having a view of the Bosphorus, Fethi Pasa Grove is located on a 16 hectare green space between Üsküdar and Beylerbeyi Districts on the Asian side of Istanbul. Some people define it as "the oxygen supplier of the Bosphorus." The grove is an ideal place to have breakfast especially during the weekends and holidays.

Maltepe Park is still being built on the Maltepe Coast. When the 171-football-field-sized park is completed, it will be the largest activity area in Europe. Along with aquatic sport fields, football fields, volleyball, basketball and tennis courts and golf courses; a zoo, an amusement park, a public meeting area, a beach, a concert hall, a mosque and a parking area is being built. There are also Mihrabad Grove, Çubuklu Hidiv Ismail Paşa Grove and Romantika Fenerbahçe Park on the Asian side and Gezi Park, Bebek Park, Maçka Park, Ulus Park and Naide Sultan Grove on the European side. However, the number is not limited to those mentioned above.

There are a large number of elegant parks in Istanbul and more is yet to come.
Last Update: Jul 15, 2014 1:12 pm
RELATED TOPICS