Experience the arts in a setting of the ancients 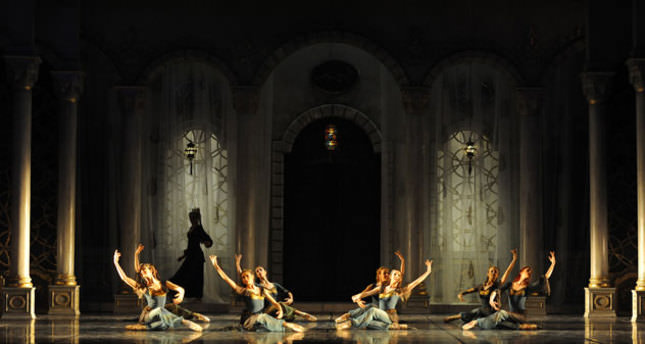 Every summer, the Gümüşlük Classical Music Festival, Bodrum Ballet Festival and the Opera and Ballet Festival in Aspendos offer the opportunity to watch first-class performances in stunning historical settings under the stars

The three significant festivals take place every summer, the International Gümüşlük Classical Music Festival, the International Bodrum Ballet Festival and the International Opera and Ballet Festival in Aspendos, draw in international and leading national performers for a series of concerts held in historic settings of antiquity. Classical music, opera and ballet enthusiasts flock from all over the world to Turkey's popular summer destinations of Bodrum and Antalya to attend these live performances held in the breathtaking historical venues. Imagine watching a performance in a 2,500-year-old stone quarry in Gümüşlük, in a castle in Bodrum or in one of the world's most wellpreserved Roman theaters in Aspendos. For the unique experience of enjoying the arts in the same venues as the ancients, these three very special festivals are definitely worth checking out.
The popular summer destination of Bodrum, located on Turkey's southwestern Aegean coast, offers much more than just sea and sand. For the remainder of July until mid-August, two unique festivals, the International Gümüşlük Classical Music Festival and the International Bodrum Ballet Festival, offer the unique opportunity to experience the arts and history in unparalleled venues under the stars.

The small seaside fishing village of Gümüşlük, located on the western tip of the Bodrum peninsula on what was once the ancient city of Myndos, hosts the 11th International Gümüşlük Classical Music Festival that began over the weekend and will run until Aug. 15. The ten-concert series includes performances by famous Russian pianist Ilya Itin, French piano virtuoso Jean-Bernard Pommier, violinist Olga Martinova, oboist Celine Moinet, bassoonist Rui Lopez and soprano Çimen Seymen just to name just a few. The Gümüşlük Festival Academy also hosts a master-class series in piano, violin, flute and bassoon taught by a number of the festivals esteemed performers. Over the past decade, this festival has become a meeting place for internationally renowned musicians and up-and-coming performers.

Performances are held at a magnificent 2,500-year-old antique stone quarry in Koyunbaba. The stones from this antique quarry were collected by King Mausolus and used in both his palace and Mausoleum. Built on the ancient ruins of the 4th century BC Doric city of Myndos, Gümüşlük has been protected by law against overdevelopment and has thence retained its charm and natural beauty, making it one of the most relaxed and picturesque towns on the Bodrum Peninsula. www.gumuslukfestival. org Bodrum is also host to the 12th International Bodrum Ballet Festival from July 19 to Aug. 6. A Bodrum summer classic, performances are held in the majestic Bodrum Castle, which the Knights of St. John began building in 1402 as the Castle of St. Peter. The castle now doubles as the Bodrum Museum of Underwater Archaeology - the biggest of its kind - and hosts performances in its theater. The stunning castle is located in the heart of Bodrum and its performances are held under the stars with the town as a backdrop. The castle also has a number of courtyards, towers and dungeons to explore as well as underwater finds from shipwrecks.

Organized by Turkish General Directorate of Opera and Ballet, this year's Bodrum Ballet Festival will have performances by the Mersin, Istanbul, İzmir and Ankara Turkish State Opera and Ballet companies as well as the Flamenco Hoy Carlos Saura Company from Spain and the Moscow Classical Ballet Theater, which will be performing Verdi's "Lady of the Camellias." www.bodrumballetfestival.gov.tr Held in perhaps Turkey's most spectacular stage setting, the 21st Aspendos International Opera and Ballet Festival will run from Aug. 20 to Sept. 20 with a series of international and national troupes performing in the 2,000-year-old Roman theater in Aspendos. Also hosted by the state opera and ballet directorate, this year's festival includes classic opera performances of "Aida," "La Traviata" and "Tosca" as well as ballet performances of "Notre Dame de Paris" and "Harem."

Located 45 kilometers east of Antalya near the town of Belkis, the Aspendos theater is the best-preserved Roman theater in Turkey, and one of the best preserved in the world.

Many of the original features of the building remain intact including a racked sounding board and original backdrop, or "scaenae frons," lend to the site's incredible acoustics. Although Aspendos was first founded by Greek colonists who came to the region after the Trojan War and possibly even earlier by the Hittites, its construction was ordered by Roman Emperor Marcus Aurelius. Built by the Greek architect Zenon in 155 B.C., the theater has an elaborate stage with many levels that is still mostly intact today. Experiencing a concert in this ancient theater, in existence for over 2,000 years allows one to experience what it must have been like to attend a performance in ancient Greek and Roman times. There is also a small museum where you can see some of the masks and clay tickets from antiquity. www.aspendosfestival.gov.tr
Last Update: Jul 16, 2014 1:22 am
RELATED TOPICS