"But first, let me take a selfie" 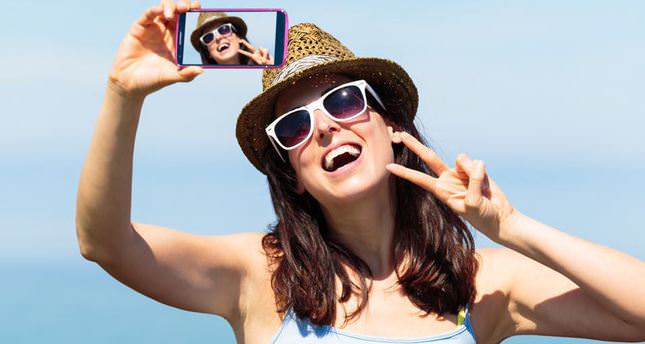 The selfie syndrome, labelled as a disorder, has taken the world of the self-absorbed by storm. There seems to be no place too sacred for the selfie. From private bathrooms to cars, the selfie is begining to destroy more than just the lives of the main subject

Last week, a young Turkish woman shared a video on her Facebook account in which she said, "Let poor people die, hello from my Porsche!" She apparently was enjoying driving her father's latest model car while he was away on a holiday. Similarly, another woman posted a video on social media while driving her car. She was relating something about her through song. Both of these women presumably tried to attract followers by looking funny. Again, recently, a passenger recorded a bus driver reading a book while driving in Istanbul.

Although it may look promising in a country where the number of bookworms is not very high, it is hair-raising to see a driver reading a book while driving a bus full of passengers. The driver first had a long phone conversation before losing himself in his book. Strangely enough, everyone remained silent and said nothing to prevent him from a possible accident. I believe the most frightening part of the story is the silence of the passengers. It is more than normal for each of us to see a driver busy with something else while driving.

Furthermore, the recent social media trend of selfies pushes people to capture photos in dangerous situation. Compared with text messaging, using navigation apps or speaking on the phone while driving, selfie photos look much more dangerous. There are very few drivers under 40-years-old, who can only focus on driving. The more we spend time in traffic, the more we use our smart phones. According to a study conducted in the U.S., it was found out that 80 percent of drivers were busy with something else while driving. Leading automobile brands such as Toyota, Nissan and Ford spent 6 million dollars on programs to raise awareness to attention deficit in traffic and the possible repercussions. Drivers are able to filter out audial distractions as long as they focus on driving.

However, there are still manufacturers who do not consider such threats. If they did, there would be fewer cars that are compatible with smart phones or tablets. It might be wrong to wait for solutions from manufacturers since center consoles are much more technologically advanced than our living rooms.

To give another example, a young American girl died in a car accident right after she updated her Facebook status saying "The happy songs makes me happy" last May. Keep in mind that more people can die in similar accidents as long as we try to make ourselves more visible on social media while driving. There are certain on-going public service announcements (PSA) to raise public awareness. Volkswagen has carried out the most interesting one. Moviegoers in Hong-Kong were completely unaware of being a part of a short PSA. The PSA was shown from the driver's point of view and the audience first saw someone driving a car on screen. A few seconds later, they received a text message and immediately turned their heads to their phones. At this very moment, they hear a scary crashing sound and turned their frightened faces to the screen again where the car swerved into a tree. A message came up on the screen: "A reminder to keep your eyes on the road."

The Turkish Traffic Safety Association also kicked off a similar awareness campaign against taking selfie photos while driving. The entertaining campaign began on Instagram aiming to prevent deadly car accidents and has been supported by many celebrities like soccer player Mesut Özil of the German national football team. The association gathers photos that are shared on Instagram with #carselfie. The photos are later shared on the association's Instagram profile by adding the image of the angel of death behind the driver's seat with a note saying, "Do not take selfies at the wheel."

Although studies show that talking on the phone is more dangerous than drunk driving, the lack of deterrent penalties does not reduce the severity of the situation. The penalty for talking on the phone while driving is only TL 80 ($37.74) in Turkey. These penalties are small considering that drivers are most likely to overlook 20 percent of dangerous situations in traffic even when they make a simple call, and this rate goes up to 29 percent when they make a call that occupies their mind.

There is no point in demanding creative ideas from the state to deter phone use while driving. All we can do is pray and hope that the selfie trend will perish forever and warn people against taking selfie photos in a car instead of "like" their photos or status on social media.
Last Update: Jul 22, 2014 1:00 am
RELATED TOPICS