Ramadan, a welcome guest at the Ottoman Palace 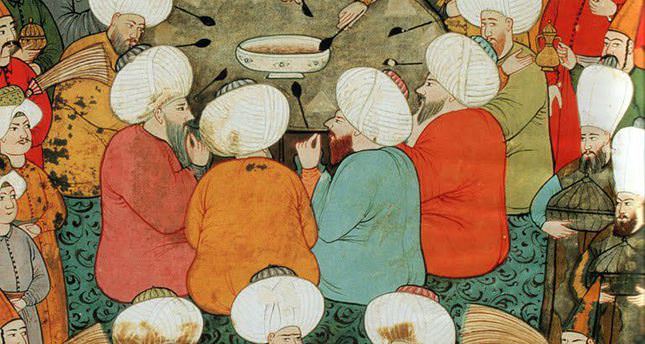 The Ottomans were known to celebrate every day of Ramadan with worship and an evening feast with its townspeople. While the count down to Eid is almost finished, the spirit of the final days is still in the air

The importance of Ramadan is undoubtable. It is the one month that is anxiously awaited, where weeks of preparation are invested, old secret recipes are dug up and tables are set, fit for a king. The Ottoman Empire placed a great deal of value on the month of Ramadan. Sultans were meticulous in creating an atmosphere that reminded people of Ramadan and God.

"Ramadan at the palace was wonderful. The preparations would start a week before. The cleaning would be done, various syrups in large jugs and an abundant variety of "iftariyeliks" (starters) in large pitchers for iftar (the evening meal marking the breaking of the fast) would come to all apartments from the palace kitchen. On the first night of Ramadan folding screens in gold would be set up around the tables of each and every apartment and prayer rugs would be spread on the ground. An imam and two muadhdhins (the Muslim official who summons the faithful to prayer from a minaret) would come with the eunuch and evening prayer would be performed accompanied with hymns. At nights the doors would be opened, the sahoor (pre-dawn meal) trays would be brought in and everybody would await the firing of the cannon to mark the start of fasting for the day. Around noon, a scholar would come to each apartment and preach a sermon. In the evening, after the cannon-shot everyone would break their fast with zemzem (holy water from the ancient well in Mecca). The iftariyelik sets would be served along with iced lemonade and sorbets. There was a special kind of syrup made of fragrant jonquils made only at the palace. The harem (seraglio) department was almost like a mosque since everybody spent their time worshipping," says Ayşe Osmanoğlu, daughter of Sultan Abdülhamid II, in her memoir "My Father, Abdülhamid."

So, when Ramadan arrived the days were spent with members of the dynasty fulfilling their religious obligations appropriately. Everybody in the harem would be fasting, performing prayers and most women would recite the complete Quran. However, the 15th day of Ramadan was special. Iftar invitations were organized at the palace. The statesmen of the Empire, the grand vizier, and other viziers of the government would all be invited. The guests would take their seat around the copper tray on the floor and break their fast. The sultan gave gifts to his guests in red silk pouches, which were called "Diş Kirası" (tooth rental). This was a way of expressing the host's gratitude to his guests for accepting his invitation, as it is believed that feeding people during Ramadan will be rewarded immensely by God. "Diş Kirası" would often be given by the wealthy living in the mansions. Hosts would give gold or silver coins in pouches to guests in need after the iftar meal. In Ottoman culture, the doors were open to all during Ramadan. So any person in need could come and be a guest of a wealthy person. Mahmut Pasha, one of the grand viziers of Sultan Mehmet the Conqueror, was known to practice a similar custom. In the article "Kitchen Organization, Ceremonial and Celebratory Meals in the Ottoman Empire," written by Professor Metin Saip Sürücüoğlu, there was an interesting quote from Uğur Derman, who wrote the article titled "Diş Kirası."

"Mahmut Paşa always prepared his guests rice with chickpeas including "chickpeas" made of gold. If someone came upon one of the chickpeas while eating the rice it was considered his "diş kirası." In the 19th century, during the reigns of Sultans Abdülmecid and Abdülaziz, the wealthy continued the diş kirası tradition. Sultan Abdülhamid II continued this tradition more for the poor."

In her memoir, Ayşe Osmanoğlu mentions that Sultan Abdulhamid II, too, gifted his guests. "To the guests who came to Mabeyn (a place located between the Harem and Selamlık [common area], diş kirası would be given by Başmabeyinci (the chief chamberlain of the Ottoman Empire). Every evening a battalion of soldiers would have the iftar meal in the Yıldız Square, perform prayers and then they would be given their diş kirası and would shout 'Long live the sultan.' "

Another featured tradition of Ramadan in the Ottoman Palace was the lectures of Huzur-u Hümayun (in the presence of the imperial). Since these lectures were taking place in the presence of the sultan, they were called Huzuru Hümayun. During Ramadan, in order to revive scholarly disputes and improve cultural developments the Sultan would invite the Ulema (Islamic scholars) to make explanations and commentaries of ayats (verses) of the Quran. The scholars and the Sultan would also kneel, the latter often contributing the lectures as well. These lectures were a tradition since the foundation of the state until the abolishment of the caliphate, but they took place systematically during the late 18th century. The Hırka-i Saadet ceremony during which the mantle of Prophet Muhammad is viewed, would be held on the 15th day of Ramadan. Three days before the ceremony, the chamber used to display the sacred relics cleansed with rose water in preparation for the event.

The ceremony would begin with a recitation from the Holy Quran and then the sultan would open the golden chest of the holy mantle with a golden key. The sultan would brushed his face over the Destiamal-i Şerif - the collection small napkins which are placed on the mantle to preserve it. Afterwards, other visitors would enter reciting salawat, saluting the prophet, and kiss the mantle. It was customary to gift these napkins to the visitors.

After the Hırka-i Saadet ceremony, it would be time for the "Baklava Alayı" (Baklava Procession). According to tradition, Janissaries would be served baklava. Once they grab their trays of baklava, they would head back to the barracks in a procession. Considering both the religious and social significance of Ramadan in the palace and the amount of preparations for and the fortune spent during the holy month, the atmosphere at the Ottoman Palace, was, without a doubt, spectacular. Hence, Ramadan, was the most-welcomed guest of the palace.
Last Update: Jul 25, 2014 1:08 am
RELATED TOPICS