The phenomenal beverage of Istanbulites: Tea 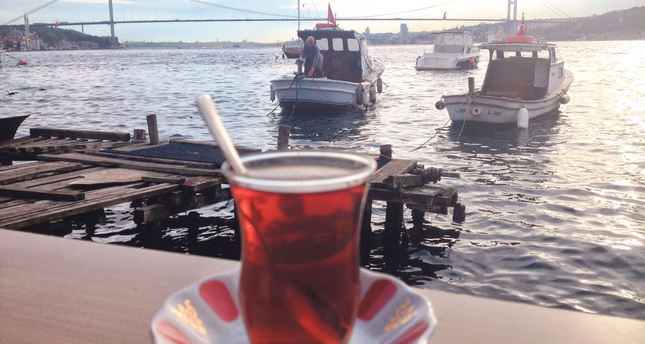 Istanbulites have a very strong connection with the street and tea is the special key that open this magnificent world. Tea houses offer different experiences to patrons as each of them harbors a unique, peculiar atmosphere

Firstcomers to Istanbul can easily see the deep connection Istanbulites have with tea. However, tea production in Anatolia is not even 100 years old. The first failed attempt at production was around the Bursa province in 1892 with seeds from China. Later, seeds from Japan were planted in the eastern Black Sea region and tea achieved to shake the throne of Turkish coffee, which brings 40 years of friendship, as it was loved by all Ottoman citizens. Tea has a special place in Anatolian cuisine.

Turkish people love to drink black tea while they have deep conversations with their friends, so it is not surprising to find a strong connection between tea and Turkish people.

As a result of this strong connection, teahouses on almost every street of Istanbul, the center of the Ottoman Empire, satisfied the need for tea and coffee of the shopkeepers. Let's take a tour among Istanbul's teahouses that try to preserve the unique taste of tea.

Dayı'nın Yeri (Uncle's Place) is one of the most special teahouses in Istanbul. It is easily recognizable with its horse statue in the middle as one walks down to Kadınlar Pazarı from the Fatih Mosque. This teahouse, a favorite place for "conservative intellectuals," is the oldest place of business at At Pazarı Square (Hippodrome). As there is no visible sign on the outside, the regulars named the teahouse themselves.

Upon entering the small shop, a huge world map on the wall makes it easy to understand the style and history of the place if it's looked at a little more carefully. On the map, the region we know as Russia is written as "S.S.C.B" (U.S.S.R.) - this fits the atmosphere of the teahouse so well that it is hard to describe. It has been in business for three generations still with its old water glasses and authentic tea glasses. It shouts a loud message to the newly open cafes, but I am afraid that nobody hears it. Nobody keeps track of tabs. When it's time to pay, they only ask, "What did you drink my boy?" Moreover, the prices for a cup of tea and tea in a small glass are the same and water is free of charge.

Dayı'nın Yeri customers are generally youngsters and middle- aged people who begin conversations with the question, "How can we save this country?" and continue with, "Everything in the world is getting worse." They mostly come in the evening.

While you walk down Istiklal Avenue from Taksim Square to Tünel, you will see Mustafa Amca Jean's teahouse on the right hidden behind the stairs of the Danısman Pass after the Hacopulo Passage. Mustafa Amca Jean's is a unique place with its pleasing tea and shabby atmosphere.

Although it looks jammed with people sitting on tiny stools, the teahouse ensures its customers have a comfortable experience.

Similar to other old Istanbul teahouses, they don't keep track of tabs. The customers say what they drank and pay accordingly. Their exclusive tea and coffee has a distinct flavor compared to that which is served at other tea and coffee houses in Istanbul. The dried tea buds in the tea create a different atmosphere in the teahouse. The customers here are youngsters, university students and failed novelists.

Located in the fold point of the Bosporus under the 800-year-old plane tree, the Historical Çınaraltı Family Teahouse was opened as a modest business in 1967 in Çengelköy. The teahouse became popular in the '90s as it was one of the main settings of the legendary '90s TV show "Süper Baba." Unlike other cafes in Istanbul, they do not prevent customers from bringing bagels, pastries, even honey and jam from their houses. Under the shadow of the supreme plane tree, the view of Sarayburnu that mingles with the Bosporus is a priceless joy. The regulars here are usually romantic youngsters. They try to do justice to the view through their poetry conversations. P.S., For those who do not insist on drinking perfect tea, I also strongly recommend the little teahouse near the Defterdar Ibrahim Pasha Mosque. There is no other place where you can drink tea this close to the Bosporus. The waves will mix with your tea. Bon appetite!

As you walk up Istiklal Avenue toward Taksim Square, you will see a red sign with a cow on it on the left of the Barcelona Patisserie. The name of the cafe comes from an exaggeration.

It is said the remaining coffee grounds ("telve" in Turkish) are so thick that even a buffalo would not sink if you put it on the telve. This cafe's tea is tasty enough to compete against its coffee. The only downside of the cafe is the possible tingling in your legs as you sit on street on an incline. Yet, Mandabatmaz is an isolated place where you can chat peacefully without breaking off from the uproar of Istiklal Avenue. The cafe's customers are usually the regulars of Taksim and women who after drinking their coffee read fortunes - looking at the images formed in their coffee cups - during their lunch-break.

I have mentioned some of the distinguished teahouses in Istanbul, and I want to sum up with the last two teahouses due to space restrictions. The first is Dem in Karaköy. Dem slightly differs from the other teahouses mentioned above. This teahouse serves more than 60 different types of tea during its 5 o'clock tea sessions with its cheerful waiters. It serves nice tea, yet Dem has not heard the shouts of joy that Dayı in Fatih, who stands against the capitalist cafe system, has. For me, the teahouse is nothing more than a "chic" cafe with its interior décor, et cetera. Last but not least, one other teahouse to visit is Dost Tea House, located in Basaksehir, far from the center of Istanbul. Dost Tea House tries to protect teahouse culture in Istanbul and make history. Three close friends, Fazıl, Fatih and Faruk opened Dost because they live far from the center of the city and its culture. There is a library in the teahouse that was built with the support and efforts of the regulars. The teahouse does not keep track of tabs and makes friendly connections with its customers. The regulars here are promising youngsters who have friendly debates.
Last Update: Jul 26, 2014 1:26 am
RELATED TOPICS