Socializing Turks take to the web 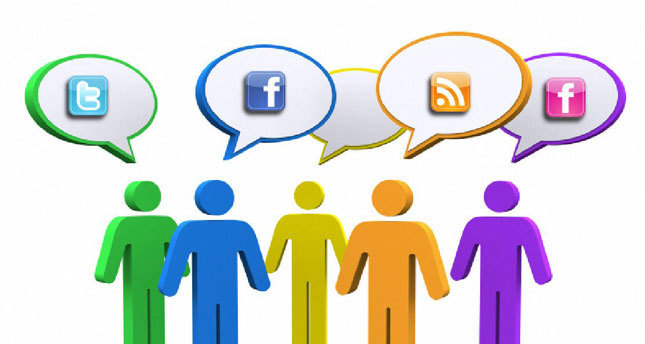 Social media is regarded as a strong alternative to traditional media today. It is on a rapid rise, especially among the young population. Considered not just as an "alternative," it has been replacing mass media in terms of usage. As opposed to traditional media tools, users of social media are participating in the production process of "their own media" instead of just being a passive audience.

There are many specific forms; however, these networks basically provide people an environment in which they can express themselves and share their thoughts, ideas and creations. It also takes a vital step in the socialization process - people develop new contacts, start new relationships and may enable people to find spouses.

As the significance of social media rises around the world, this trend is also visible in various forms in Turkey. Social network usage constitutes a significant proportion of online time in Turkey where users spend, on average, 28 hours a week on social networks, while they spend a total of 50 hours on the Internet. According to studies, the number of hours online is gradually increasing every year. So, we can say that Turkey has been witnessing an explosion in the usage of social media over the last decade. Without a doubt, the young and dynamic part of Turkey's population is playing a key role in the high utilization of social media.

All forms of social media have been widespread in Turkey; however, studies show that social networking sites take first place with regard to the number of users, with micro-bloggers, streaming and online gaming following closely behind. Ninetyseven percent of Internet users in Turkey have accounts with at least one social network.

Facebook is the most popular social network for Turkish Internet users, as Turkey has a notable place in worldwide usage. The country is ranked as the seventh largest in global usage of Facebook (second in Europe) with 36 million users. This statistic shows that almost five out of every 10 Turkish citizens have an account on Facebook. Facebook is not just used as a tool for social networking, as the purpose of usage differs from user- to-user. For example, playing games with Facebook applications is quite popular.

Turkey also has a large number of people on Twitter. The number of members in Turkey has risen by 30 percent compared to last year, reaching nearly 10 million users and ranking in eighth place in global usage. These are not passive-users, however; almost half of them indicate that they regularly use Twitter. On average, 8 million tweets are sent from Turkey daily. With these rankings, social media is becoming a powerful rival of mainstream media in Turkey.

On the other hand, discussions are emerging concerning the increased significance of social media, such as Internet freedom. States are trying to maintain a balance between freedom and the right to privacy. Turkey has also started to come up against this issue in the last couple of years.

Indeed, debates escalated after the struggle between the Turkish government and Twitter several months ago. In that case, Turkey's Internet watchdog blocked access to Twitter because Twitter had refused to close accounts that leaked information and violated private life. After Twitter agreed to suspend illegal accounts, the court lifted restrictions, and users were able to reach Twitter again.

These rankings and recent studies prove that Turkey has a very strong showing in the numbers of social network users already, and as long as sharp growth continues, Turkey will be able to keep its place as one of the top social media-using countries. As a result of this, we will speak of the socialization effects of social networks more. The effects and significance are not limited to socialization; it's likely that social media will take over the power of traditional media and probably become a more effective tool that determines public opinion.
Last Update: Jul 31, 2014 2:04 am
RELATED TOPICS