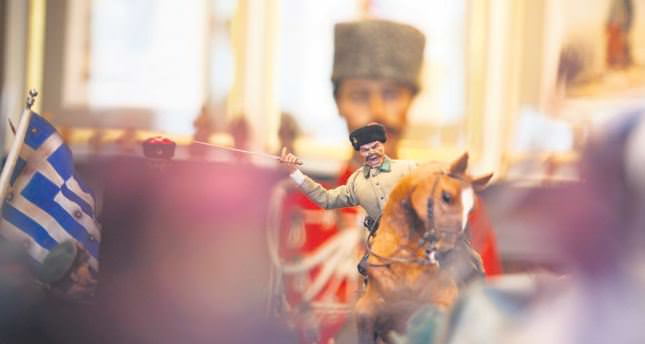 Istanbul's Military Museum contains intricate details of weapons, armor and war memorabilia extending from the Göztürks, Huns and the Seljuk Empire. The janissary musical performance, the "Mehter Takımı," is the final show to complete your understanding of Turkey's military army

With well over 2,000 years of military history to cover, it's no surprise that the Istanbul Military Museum has an enviable amount of exhibits. With the exhibition beginning back in the days of the Turkish people of the Asian steppe, the museum takes you through the years of armies taking on the Great Wall of China, all the way up to the Independence War, and everything in-between. No wonder there are over 55,000 objects in their inventory.

The huge cannons, including the behemoth that smashed the walls of Constantinople back in 1453, and an intimidating warplane set the tone for military grandeur when you work in through the garden in the Harbiye district of Şişli.

When one thinks of the military museum, they presume Ottoman history and independence, but the curators are quick to assure you that there is plenty more to Turkish history. There are dioramas on the Göztürks, the Huns - and their famous leader, Atilla - as well as the Uighurs, showing diagrams of their war tactics, as well as the kinds of weapons they used and the lives these people lived on the arid and forbidding Asian steppe. What's clear is that the museum would like you to know that the Turkic people have always been good fighters. An interesting exhibit looks at the Turan Tactic, a three-step plan to defeat any enemy used by the Göztürks.

The plan was simple but effective, and still exists in various guises in modern day warfare as well as diplomacy, politics and sport - which are all kinds of warfare in their own way, just without bullets and bombs. The first tactic is to wear down the opponent while using as few men as possible and expending as little energy as possible. The next move, which seems unconventional, is to withdraw. Usually in warfare, withdrawal is the death knell - in fact, the majority of casualties sustained in warfare usually occur during withdrawal. In this instance, the Göztürks pulled back to throw off the opposition, and compromise the flatness of their line. The final move is ambush, attacking the disorientated line, and surrounding them with cavalry. Simple, but effective.

The museum, which was formerly a military school and barracks where Mustafa Kemal Atatürk learned his trade, takes you on to the greater migration of the Turks towards Anatolia, changing from nomads to a settled people with a settled language before creating the Seljuk Empire.
Often lost behind the huge edifice of the Ottoman Empire, the Seljuk Empire was a mighty power, and a key part of the constant transition of the Asian areas of the Middle East, Arab Gulf, Persia and Anatolia, carrying on the torch from the Romans, Byzantines, Persians and Greeks.

Despite the long shadow of the Seljuk Empire, just one room and few artifacts are dedicated to it, although there is plenty of information - a bizarre role reversal in a museum that is heavy on artifacts and less heavy on information.

The volume of exhibits naturally balloons in the next stage, the Ottoman Empire. Before that point, the museum is essentially one giant diorama with the occasional example of weapons used from the day. Once the Ottomans come on the scene, the number of artifacts becomes almost overwhelming.

The opening room houses two stunning and priceless relics of the Ottoman era, the helmet belonging to Orhan - the son of Osman - and the Kosovo Standard from the 1389 battle. Broken but still in one piece, Orhan's helmet is still a stunning sight from history, kept at 34.6 degrees Celsius to help maintain its preservation.

Two information boards provide the incredible scope and origins of the Ottoman Empire. One is a map showing the boundaries of the great empire, marked with the dates of when certain regions were won - a monument to the breathtaking pace at which the Ottomans moved from a group of nomads to the most powerful empire in the world.

The other is Sheikh Edebali's advice letter to Osman Ghazi. The letter is impressive not just for its gravity, but also its prophetic nature. Edebali tells Osman "a state belongs to the one that governs it" before warning that "inactivity withers a person" - if only those that came in the latter Ottoman period had heeded that advice.

The Conquest of Constantinople Hall helps bring to life the greatest moment in Ottoman history, providing a chronological chart of events as well as models of the positions and landscape during the battle. A friendly tour guide might help you with some of the specifics. As one click of Google will tell you, this is also the area that houses the treasured Golden Horn Chain. For the uninitiated, the hulking chain lay across the mouth of the Golden Horn preventing Ottoman ships from entering the estuary, and forcing Sultan Mehmet to order his men to, famously, carry their boats around Pera and into the Golden Horn.

From there, the museum is essentially a parade of the great, the good and the weird of weaponry. It includes the huge German two-handed sword, the almost comically ornate Flintlock rifles, as well as the bizarrely breathtaking eight-barrel gun belonging to English King George III, not to mention Franz Joseph's garish gift to Sultan Abdülhamid II of a set of table and chairs made out of guns and swords.

The Independence War brings rather more sanity and context with the tunics and weaponry belonging to heroes of the war. Context is the main point at this stage of the tour. The museum excels in its volume of exhibits, but the history is opaque, leaving information on certain weapons and items difficult to find. By the time of Independence, there is enough information available to make the pieces come to life.

If you have avoided museum fatigue, it is a must to find the energy to watch the janissary musical performance, the "Mehter Takımı," a display of sound and color that makes it easy to understand why the world's first standing army and military band struck such fear into their opponents. It's a
fitting end to a people's military legacy.
Last Update: Aug 06, 2014 1:54 am
RELATED TOPICS