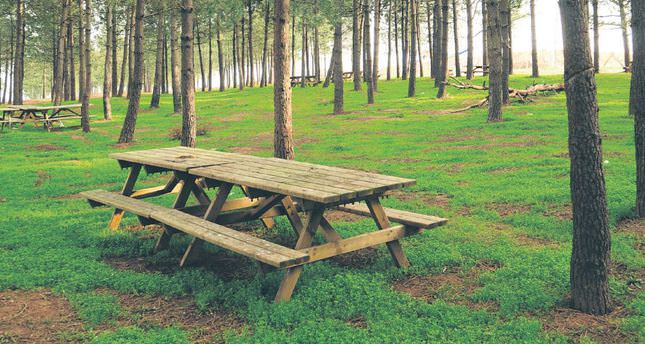 We hear about conflicts between different sects or religions. With every passing day How amazing that in a mid-Anatolian city a helping hand has been extented out to people from a different region, without question or hesitation

Upon feasting and visitng family for the three days of Bayram, a picnic in a popular park at Sivas had become an annual tradition. The park was incredibly crowded, despite the early hour. Fortunately, we had sent an earlier scouting party who had nabbed a gazebo next to the waterfall.

As we set up our picnic, I eyed up our neighbors. On our right and behind us were typical Sivas families - mum, dad, kids, aunts, uncles, grandparents. The babies were in hammocks being rocked to sleep, the grandparents were sitting in pride of place, being served tea.

But the family to the left was different. There was the normal matriarchal older woman, three or four married couples and a bevy of children. The difference was that they all had dark hair and almond-shaped eyes, with a look that brought to mind the Moghuls. My nephew, seeing where my eyes had strayed, leaned over and whispered in my ear: "Afghanis."

I have been going to Sivas every year for over 20 years. For most of those years I was the only foreigner that many people had ever met, and was kind of a novelty. But here, sitting within spitting distance were three families of Afghanis - and no one was surprised to see them.

Turning to my brother-in-law, I started pumping him on what he knew about them. Everyone chimed in. The Afghanis had been coming to Sivas for the past five years or so, they lived in houses near my nephew, they didn't speak much Turkish and other than the fact that they were refugees, no one knew much about them.

Determined to find out more, I took a melon as a "house-warming" gift, and went to the neighboring gazebo. I asked them if they spoke Turkish. The answer was in the negative, but they nodded to a small girl, no more than 10. She took one look at me, blushed and ran. Left without an interpreter, I wasn't sure what to do. Then one of the women looked at me and said "Do you speak English?" Relieved, I said yes. Immediately I was invited in and sat down.

The lady's name was Raza and she had worked as an English teacher in Afghanistan. I asked her to tell me her story, about how she came to this Central Anatolian city.

She told me a harrowing story of how her family had fled Afghanistan many years ago, when the Hazara people were being persecuted by the Taliban. They fled to Baluchistan, in Pakistan. However, here they were also persecuted. Five years ago, bombs were set off at mosques or in market places, with a large number of Hazara, including women and children, being killed. She told me how two years ago some men got on a crowded bus and told all the Shiite or Hazara to get off. Those who did so were shot. This is when her family decided to leave, making their way to Iran.

From Iran, they came to Ankara. In Ankara the U.N. gave them refugee status and her aunt (the matriarchal woman) was sent to Sivas, as she had an 18 year old daughter with cerebral palsy. The others went to Batman. They were here visiting the aunt for the Bayram.

I spoke with Raza for up to an hour. She told me how in Baluchistan she had been arrested for trying to teach women English and Mathematics. She said how much she wanted to teach the Hazara women in Batman, but with little to no support from the local city council, this was next to impossible with her small children.

Things in Batman, where there are 135 families, are not very good for the refugees. They have to pay TL 150 rent for a very dilapidated house. Raza's husband, who taught law in Baluchistan, is only able to work as a laborer and earns very little. There are a dozen other educated men there who are in the same position. There are also nine families with no father, some having lost both parents4, are really struggling. Raza told me that things in Sivas were much better. The AK Party city council was very generous, taking good care of the Hazara refugees here; they get regular stipends, which is not the case in Batman. They are envious of their aunt's situation, as work is much easier to find in Sivas.

The real human tragedy is how these families come to Turkey in the first place. They are the victims of human trafficking. In Iran they pay thousands of dollars to traffickers to cross to Van in Turkey. Quite often the families walk from Iran; there are countless stories of children who are lost during this dangerous trek.

After finishing up our conversation, I decided that I needed to talk to the people in Sivas who were responsible for the care provided to the Hazara. I was immediately put in contact with Hüseyin Akpolad, who is not only a city councilor, but also the head of the Dost Eli (Friendly Hand) association, as well as a trustee for a foundation associated with the governor's office after the Van earthquake in October 2011, 250 refugees were brought from Van to Sivas. They were housed in a sports hall. Soon this number doubled; the people were sleeping on old beat up couches in the sports hall, and Hüseyin understood that this could not continue. Working with Dost Eli, the governor's office and the city council, he put all his efforts into procuring funds to rent houses for these refugees.

Today in Sivas there are 200 Afghani families. In addition, there are five Pakistani families, 15 Syrian families, 50 Iranian families and 15 Iraqi families. A total of 1,500 refugees are located in the city, and all fall under the care of Dost Eli. Dost Eli helps the refugees find accommodation; Hüseyin tells me how, as people are hesitant to rent to refugees, he has acted as a personal reference for 46 different flats. He also provides work references.

But Dost Eli goes beyond this. Hüseyin has organized the refugees, appointing 10 community representatives. These representatives are in constant contact with him, informing the association of any problems. According to Hüseyin, this is unique in Turkey. In addition, Dost Eli organizes celebrations on the religious holidays. Afghani artists are brought to entertain the people and they are also given iftar meals, with the menu being determined by the refugees. They tell Hüseyin what to buy, he purchases the food and they prepare it. They also have frequent picnics, where again the menu is determined by the refugees. But more significantly, Dost Eli has worked with the governor's office and the city council on a number of projects to make the refugees' life better and to help them feel more at home in Sivas. One of these consists of Turkish courses to help the new residents settle into the city. As Hüsyein says, if Muslims are being persecuted anywhere in the world, Turkey has no option but to open its doors; Dost Eli's heart is big enough for them all.

These efforts by Dost Eli have truly paid off. The refugees have felt so much at home in this Anatolian city that they helped Hüseyin in campaigning during the local elections, handing out brochures. How refreshing in this time of sectarian strife and interreligious conflict that Muslims from different sects, different backgrounds are working side by side towards a common end.
Last Update: Aug 07, 2014 2:01 am
RELATED TOPICS