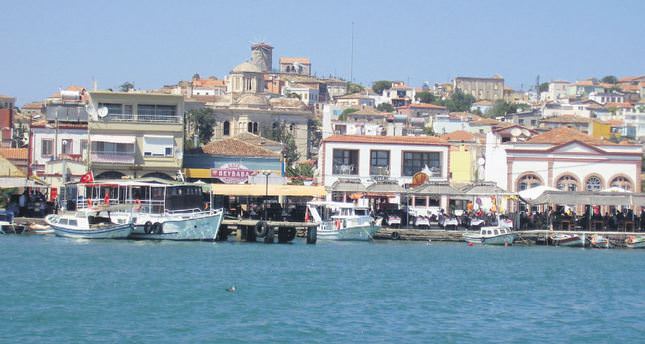 Patricia Bay is not your ordinary holiday destination. Away from the hustle and bustle of the city, the 100-year-old Greek village that was originally used as barns will take you back to an era that is hard to believe was once a lifestyle

The facility located on Patricia (Patriça) Bay of Cunda Island, one of the rare untouched beauties, attracts many holidaymakers to its technology free, distant and natural environment despite its uncomfortable service. The facility was built by turning 100-yearold Greek barns into small rooms. The facility charges TL 200 per day for a room. As the water is limited, sometimes guests take showers with the water from water pumps. Naturally produced eggs, tomatoes, green capsicums and cucumbers are consumed at breakfast.

Patricia Bay, located on the backside of Cunda Island, is reached through dusty village roads. The bay stands out with its rare untouched beauty. With its deep blue sea and clean beaches, the bay is hailed by those who want to spend a quiet holiday. A facility on the bay attracts holidaymakers, although it does not offer the same opportunities and services as other hotels in the country. Built by turning 100 old barns, belonging to Greeks who left the region after the 1923 population exchange, into small rooms, the facility does not offer services such as air conditioning, radio, television and Internet. The electricity at the facility is supplied from solar energy. Moreover, since there is a shortage of water, when there is no water flowing in the pipes in the bathrooms, the guests take showers with water coming from water pumps. Hosting some well-known footballers, their wives and artists, the facility charges TL 200 per day for a room, and breakfast is on the house. During breakfast, eggs that are picked from the chicken coop behind the facility and naturally produced tomatoes, green capsicums and cucumbers are served.

The manager of the facility, Baran Molay, said: "There are seven rooms including the mill room. This area is an old Greek village. Our rooms used to be barns. We turned the barns and the mill into rooms. I have been managing this place for five years." Molay said that they offer a holiday experience that is totally natural.

She indicated that they produce their own electricity via solar energy, and store water after filtering it. "We have our own chickens and a small vegetable garden in the back. We offer our services in a natural environment by the beach. There is no TV, radio, fridge or air conditioning in the rooms. There are only fans in the rooms to cool the air. Since the guests know what awaits them, they do not demand anything. The Internet is only available via GSM operators. We do not provide this service," said Molay. Molay stated that there ıs only a double bed and a small bathroom in the rooms. She noted: "Daily newspapers are delivered. We do not offer luxury. For some people, we offer the worst holiday, but for some the most natural. Anyhow, we attract a lot of holidaymakers. From time to time, people call to make reservations. When we tell them our services and name our price, they ask if we are joking or not. Sometimes people hang up thinking they have called the wrong place."

People who want to get away from city life, electromagnetic pollution, stress, traffic and troublesome TV news prefer the facilities' unique experience, said Molay. Abdullah Güney, one of the guests at the facility, said that he is spending his holiday in a natural and authentic place with a clean sea. "This is a Greek village with a 100-year-old history. It is close to nature and away from people. There is no luxury in the rooms except for the bed. I came here with my wife. There is no technology in the rooms, not even air conditioning and television. It would be better if there was no mobile network," he said. Eliz Naz Şamlı, who came to the facility with her family, stated that she was surprised to learn there was no air conditioning and television in the rooms. She said she was very bored when she first came here. "Now, I find it very comfortable and entertaining," she said, adding: "It is a very calm place. We are staying in stone buildings. Luckily, we came here."
Last Update: Aug 09, 2014 2:00 am
RELATED TOPICS