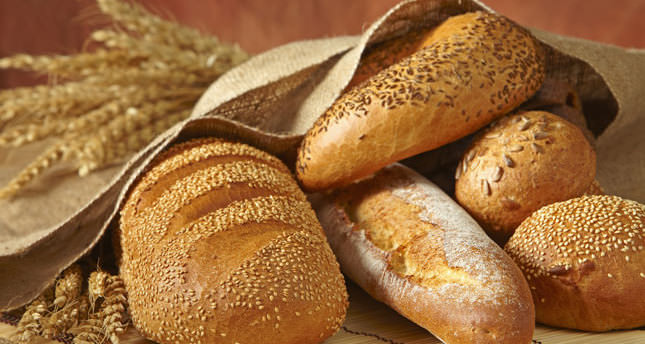 Bread is the "staff of life" It has been a slogan used by governments and revolutions over the centuries. Recently in Turkey, bread once again found itself in the midst of a political campaign. Why is this food source, which we take for granted, of such importance?

In the Bible bread is described as the "staff of life." Miguel de Cervantes says in Don Quixote: "With bread, all sorrows are less." And, although apocryphal, when informed that the peasants were starving, Marie Antoinette said "Let them eat cake" (or more accurately, brioche). A later revolution, that of the Bolsheviks, was run on a campaign of land, bread and peace; later in the Soviet Union, citizens were commanded to "respect bread" or even "worship bread," due to its importance in the survival of the population during World War II.

The first bread was probably made around 30,000 years ago. Roasted or ground cereals were mixed with water and then cooked; perhaps this was the result of an accident, perhaps some prehistoric Gordon Ramsey just wanted to see what happened if you heated up these nutty flavored grains. Unleavened breads were the first to be produced, breads like lavash, tortillas and oatcakes. So how did we get the light, leavened breads of today? Yeast spores occur naturally, being found on a number of fruit and vegetables, as well as on cereal grains; if dough is left, it will naturally rise. In fact, ancient Egyptian bread, examined under an electron microscope, has been found to include yeast cells.

It is known that around 300 B.C., baking began to be a respected occupation in Rome, and the first bakeries opened around this time. Indeed, it was the Roman satirist Juvenal who used the term "bread and circuses" to refer to palliative government measures, that is, distracting people from the flaws in the government by gratifying their more immediate needs or desires, entertainment and sustenance.

For most peasants in pre-industrial Europe bread was life, as it made up the bulk of their diet, with the average adult male eating as much as three pounds of bread a day. Quite often, bakers would add things to stretch the dough, ranging from sawdust and hay to dirt and other unpalatable matter. Barley or oats were used for peasant bread, while wheat was reserved for the upper classes. Most rulers understood that the regulation of bread prices was important in keeping prices stable and the people happy, and thus tried to ensure that bread remained affordable. King Louis XV of France (1710-1774) was known as the "Baker King" as he was so concerned with bread and related regulatory activities.

In the Ottoman State, Sultan Mehmed II (1432-1481) ensured that after the conquest bakeries were set up in Istanbul; there were bakeries for the army, palace and people, with special bakeries even being established to feed hunting dogs. The price of bread was always regulated in the Ottoman State.

In Europe, most peasants existed at subsistence level, at least until the Laki volcanic fissure in Iceland erupted for an eight-month period, from June 8, 1783 to February 1784. This volcano sent a cloud of sulfur particles and a haze over most of Europe, affecting not only Norway and the British Isles, but also France, Germany, Italy and Spain, even going as far as Egypt and North America. Coinciding with an unusually hot and dry summer, this eruption affected the crops.Reverend Sir John Cullum wrote that barley crops "became brown and withered … as did the leaves of the oats; the rye had the appearance of being mildewed."

The British naturalist Gilbert White stated that: "The sun, at noon, looked as blank as a clouded moon, and shed a rust-coloured ferruginous light on the ground…. At the same time the heat was so intense that butchers' meat could hardly be eaten on the day after it was killed; and the flies swarmed so in the lanes and hedges that they rendered the horses half frantic …." (http://www.theguardian.com/world/2010/apr/15/iceland- volcano-weather-french-revolution) The result? With grain in scarcity, bread became expensive; during the winter and spring of 1789 bread riots became common, and with the fall of the Bastille on July 14, 1789, leading to a full-blown revolution in France.

The bread revolutions did not stop here. In 1848 Europe was once again swept by unrest and revolts. The average worker could spend as much as half his daily wage on bread. But when grain crops failed, the price of bread shot up. At the same time, as the worker now had less money in his pocket, the demand for manufactured goods decreased, leading to unemployment. Many blamed the ruling class for the resulting famine and economic upheaval.

Bread thus has had a central role in the development of democracy, in the overthrow of tsars and kings, and in keeping the people content. The democratic systems that we have today are thanks to movements sparked by a lack of bread; in most modern democracies the price of bread, or at least wheat, is still controlled by the government.

In Istanbul, everyone is familiar with Halk Ekmek (people's bread) A.S. The first bread to be produced by Halk Ekmek appeared in August 1978. The idea was to produce quality, healthy bread at an economic price and to prevent high prices or unfair implementations. By producing quality bread at economic prices those with limited financial means were given a helping hand. Anyone can purchase Halk Ekmek from their small kiosks in every part of Istanbul, and in 2014, loaves weighing 300 grams were sold at 60 kurus ($0.27), with 1.7 million being produced every day. The bread sold by Halk Ekmek has gone far beyond being an inexpensive alternative; they produce a great variety of breads ranging from the normal Turkish bread to unsalted bread, gluten-free bread or whole-grain bread. It is preferred by many due to the high quality of the product; price is now a secondary consideration when purchasing Halk Ekmek bread.

It has been over a century since Europe has felt the need to distract the populace with bread and circuses. Not only Europe, but Turkey has grown past this; people are aware what they want from a democratically elected government.

Strong economic policies, resolution in foreign policies, health care, education, development of the infrastructure; this is what people are looking for. So, the "surprising" loss of votes by the coalition between the CHP, MHP and the other 11 parties, who attained only 36.5 percent of the vote, is hardly surprising when you look at the campaign. Ekmeleddin for Bread! The message from the voters is clear; look beyond palliative policies, and focus on the real issues.
Last Update: Aug 18, 2014 2:33 am
RELATED TOPICS