Street food is not junk food 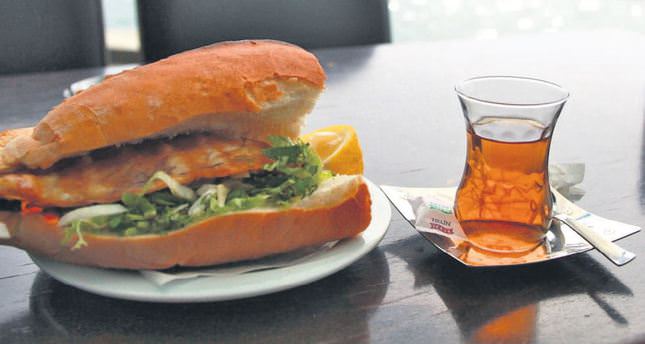 Some of the most extravagant things in life don't have bells and whistles and aren't garnished with mint leaves. They come from the most unexpected places and have flavors that make your taste buds dance. Sometimes these things are found humble carts

Almost every Turkish mother has certainly yelled after their scrambling child darting out of the house in a hurry to get to school, "be sure to come home for dinner and don't you dare eat junk off the street," and by this she means, meals from carts. First of all, street food is not junk. Secondly, if you want to live in a mobile city such as Istanbul you must know the hood and speak the lingo.

Most teenagers who are studying at tertiary level are usually at school caged in a dark corner of the library or stuck in a traffic jam trying to get home from school. They end up using their home as a hotel as most of their day is spent out on the street.

This is when street food comes into play. At first you are drawn to the price, because a shoe string budget is a challenge all students are too familiar with, followed by the convenience of not having to choose from an endless list of options on the menu. Street food doesn't need the glamour of flashing neon signs which steal valuable moments from your life as it paralyzes you, hypnotized by the sliding and blinking of colored lights on a black background. Then there is the flavor. You can be sure that whatever it is you are getting, it will always taste the same. There is no element of surprise, only consistency. It is not difficult to see that food sold on the streets in little carts or in a small hole in a wall saves the lives of busy Istanbulites.

I conducted a quick survey with my friends before writing this piece and asked the same question to each of them: "Where is the most famous street food place?"

The result didn't surprise me. The answer was unanimous - "the ricecart in Unkapanı." Chief Ayvas has a little pushcart full of pilav (rice) and chicken and he puts "ayran" (a traditional Turkish beverage made of yoghurt) on top of the pushcart. He stands in front of the İMÇ Bazaar every day after 8:00 p.m. I can easily say that chief Ayvaz makes the best pilav in Istanbul; it is fluffy and has an element of surprise in it - chickpeas. He gives you two options only: with chicken or without. Two-minute noodles eat your heart out, because chief Ayvaz has his meal ready for you in less time without it tasting like something worse than plastic.

The only catch is, you wait 10 minutes in queue, but I assure you, it is well worth it. If you think that only those on a budget get their meals here, the luxury cars parked near the cart will prove you wrong.

If we asked tourists who have visited Istanbul recently, "What is the most popular thing on the streets of Istanbul?" they would often answer, "The waiters yelling 'shish kebab' or 'doner kebab' in front of restaurant doors." I believe you can find hundreds of different places that claim they have the "best doner kebab in town." First of all, I love doner kebab and I can easily say Sadık Usta is the best place for doner kebabs. There is no real address to give to someone who wants to find it, you must endure the challenges of a treasure hunt, and there are no small prizes along the way, other than the prize of feasting on a great kebab.

It is located behind the Çorlulu Ali Pasha Madrasah (one of the most popular hookah venues in town) near the little Çorlulu Ali Pasha Mosque. You take the set of stairs to the right of the mosque which will lead you to the next street. You walk about 25 feet and turn left, after that you should walk about 35 feet and turn left again at the corner where you see a bakery. You should then see Sadık Usta (officially known as Dönerbank). All of the shopkeepers around the Grand Bazaar know him and refer to him as Sadık Usta (Chef Sadık), but as a matter of fact, Chef Sadık passed away a few years ago and assigned his nephew to take his place many years ago.

The shop features about 2 square meters of floor space and has four employees. There is a grill to cook the kebab and a workbench big enough to support the length of a knife. Dönerbank kebab has a special ritual for their first time customers, and in one word, it is marvelous! Firstly, they will smile at you and ask if it is your first time. If you respond with a "yes" he will give you an expression of both surprise and disappointment and will follow it up with, "Are you sure you're ready for this period of your life, for no kebab will ever measure up to this?" They will then shave a very small piece of the kebab and offer it to you as a taste tester.

Kabataş is a critical transportation hub in Istanbul and is also famous for its meatballs. In front of the Kabataş Avrasya pier you can see the outdoor meatball restaurant.

It is not entirely a restaurant but rather a footstool and a table upon which they serve food as well as providing more options on a carte. The most popular food on the carte is the meatball sandwich but you should try their grilled sausage.

The grilled fish sandwiches are also very popular street foods in Istanbul and you can find more than 20 boats around Eminönü as well as many restaurants selling various kinds of seafood under the Galata Bridge. Unfortunately, I could not recommend the boats near Eminönü nor the restaurants as this is not in line with my theme of street food. However, I will mention the grilled fish sandwiches pushcart on the other side of the Golden Horn Bridge, better known as the Karaköy district. A fellow in his 30s came to the front of the Karaköy parking garage on the opposite side of the Koska shop with a pushcart filled with grilled fish after 6:00 p.m. I never asked his name but we chatted for a little while (this was a few years ago) and he said he began his work after 6:00 p.m. after he finished working his day job. He was preparing grilled fish sandwiches and selling sodas but only attracted around 15 customers on ordinary days.

Last but not least are street snacks. There really is no particular place for snacks, but mixed pickle juice is wonderful at nights in winter to warm you up, while stuffed clam with a squeeze of lemon is the perfect refresher during summer. Doctors may not agree, but personally, I have never experienced any adverse affects or heard of anyone who has after eating from street vendors selling stuffed clams and mixed pickle juice.

In a word, a metropolitan person could spend their entire day on the street, going to school, work or going to hang out with friends. This is the main reason street food was created and one of the most important relationships Istanbul has between customers and street food pushcart owners. They also have to create awesome tastes and improve the special relationships they have with their customers in order to be phenomenal. Let's savor the streets
Last Update: Aug 19, 2014 9:39 am
RELATED TOPICS