Speaking out for justice 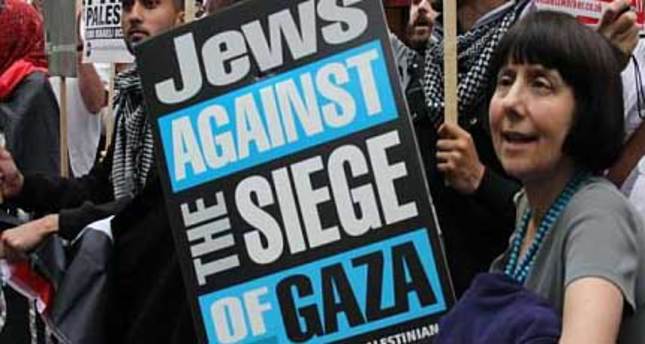 The members of the Jewish Voice for Peace (JVP) base their actions on the Jewish traditions of peace, justice, human rights and respect for international law. The JVP is demanding a cease-fire and that the siege in Gaza be lifted. They are also calling for an end to the Israeli occupation.

Among this carnage a voice rings out. It is a voice speaking for peace and justice, from an unexpected quarter. This voice is the Jewish Voice for Peace (JVP), which was established after the Second Intifada by Jewish Americans. Their goal is to try to influence U.S. foreign policy so that it is in line with the ideals of peace, justice and human rights. Moreover, they demand an end to the Israeli occupation of the West Bank, the Gaza Strip, and East Jerusalem, and a resolution to the Palestinian refugee problem that will be in keeping with international law.

According to the JVP, the fact that the United States provides Israel with $3.1 billion (TL 6.74 billion) of military aid every year is a major stumbling block for a solution. They state that the U.S. government must ensure measures be taken to establish peace in the region; indeed, America has great influence in this matter. According to the JVP, "decades of U.S.- led peace talks have instead provided cover while Israel continues to expand settlements. The U.S. is not an honest broker in these peace talks and the parties are not on an even playing field." Without pressure, there is no reason for Israel to abandon its ambition for more land. To create this pressure, the JVP supports tactics such as "boycott, divestment and sanctions to pressure Israel to end the occupation." "Without these conditions, ceasefires will only be fragile and shortlived … because the root causes are not addressed and because the Palestinians are condemned to continue living the daily violence caused by the Israeli occupation, including displacement, arbitrary arrests and detention, segregation, and an inability to maintain a self-sustaining economy."

As a Jewish nongovernmental organization, they feel that it is important to criticize the policies of the Israeli government and those of the American Jewish establishment, and to bring public attention to the violations of human rights that are an inherent part of Israeli policies toward Palestine.

The JVP is adamant that a resolution to the current situation, a permanent and sustainable peace, can only be achieved when the occupation comes to an end. "We stand against all violence against civilians. We believe that the occupation is the root cause of the violence, and that the occupation itself… is an act of violence … Peace will only be possible when Israel acknowledges the Palestinian refugees' right of return and negotiates a mutually agreed, just solution based on principles established in international law, including return, compensation and/or resettlement."

"As Americans, and as Jews, we are all complicit in the ongoing violence and discrimination against Palestinians. We call for the suspension of military aid to Israel until the occupation ends. We oppose all U.S. aid to Israel that is used to perpetuate the occupation, to attack civilians, to violate human rights, or to support the settlements." The JVP states that many American Jewish institutions explicitly support Israel, participating or carrying out "Stand with Israel" rallies during the recent crisis. However, a number of American Jewish citizens are standing up and saying that Israel does not represent or speak for all Jewish people. One (maybe the only) positive outcome of Operation Protective Edge has been that many more Jewish Americans have become involved with the JVP, with 50,000 new people joining the mailing list in the month of July and 16 more chapters being set up in cities across the country.

According to the JVP: "As the occupying country, Israel cannot claim self-defense while attacking a population that they have subjected to a siege since 2007, occupied since 1967, and displaced from their homes in 1948. Israel has the right to defend itself within its borders, but has refused to determine its borders in order to continue expanding its territory through settlement building. The right to selfdefense does not give Israel the right to kill civilians. We hear a lot about Israel's right to self-defense, but none about the right of Palestinians to defend their homes and families from Israeli attacks; there is a clear doublestandard at work." So how does the JVP act to speak out against Israel? The JVP endorses the use of nonviolent strategies and is a part of the Boycott, Divestment and Sanctions (BDS) movement, which they believe is fundamental in achieving these ends.

"In solidarity with the Palestinian Boycott National Committee and other Israeli and Palestinian civil society organizations, JVP chapters organize and participate in boycott campaigns that target companies that profit from the Israeli occupation, such as Boeing, Hewlett-Packard, G4S, Caterpillar, Motorola, and others." The BDS movement is a global movement that advocates nonviolent action, using economic pressure to try to bring an end to the Palestinian occupation, a right to return for refugees and full citizenship rights for Palestinians within Israel. Organizations throughout the world are participating in the BDS movement (see the Boycott National Committee's website: http://www. bdsmovement.net).

"Operation Protective Edge has produced an upsurge in support for BDS campaigns, as it is increasingly clear that Israel does not yet feel pressured to make the concessions necessary for real justice and real peace."

In addition to the BDS movement, the JVP also works closely with the Institute for Middle East Understanding, a Palestinian organization that provides information and media analysis on the region. The JVP has also produced a video and photo project in which famous people, actors, activists, scholars and Jewish luminaries speak out for Palestinian human rights. This can be viewed at: http:// freedom4palestine.org and http:// jewishvoiceforpeace.org/blog/brianeno-tony-kushner-mira-nair-standup-for-palestinian-rights.

The JVP is also active among American youth, having a strong presence on college campuses. Recently the JVP held student leadership training in partnership with the American Friends Service Committee to help student activists set up divestment campaigns on campus. In the last month a number of new chapters have opened up at universities throughout America. The JVP states that it will take a stance against any type of discrimination, be it anti-Semitism or Islamophobia. They also speak up if the accusation of anti-Semitism is used to make valid criticisms, protests or concerns appear unfounded. In short, the JVP is working to educate people to act against hatred and racism, and to speak out against discrimination and racism, wherever and in whatever form it appears. Their voice is getting louder, and it is high time the world started to heed it.
Last Update: Aug 23, 2014 9:50 am
RELATED TOPICS