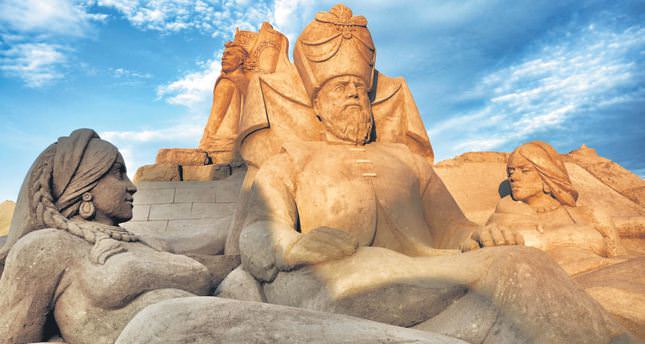 by Leyla Yvonne Ergil Aug 28, 2014 12:00 am
The popular summertime destination Antalya hosts one of the world's largest sand sculpture festivals every summer. With this year's theme being Empires II, come see the likes of Nefertiti, Suleiman the Magnificent and William Wallace of "Braveheart" in magnificent sand formations created by international artists on display at the beautiful Lara Beach.

Every year, Antalya's blue flag Lara Beach hosts Sandland: The International Antalya Sand Sculpture Festival, in which international artists spend months perfecting magnificent sculptures out of sand each year on a different theme. This year, the 8th annual International Antalya Sand Sculpture Festival, which is being held from May 1st to November 30th, continues to impress with its astounding crafted sculptures that are brought to life through inventive lighting as well as spread throughout a stunning setting.

I had the opportunity to speak with Sandland Festival Director Cem Karaca, who explains that each year a series of master level sand sculptors are invited from countries all over the world. Up until now, sculptors from nearly 20 different countries have taken part in the festival, says Karaca, adding that in general, participants are fine arts graduates that have studied sculpting and then went on to further hone their skills in the art of sand sculpting. "Every country actually has their own form of education in this unique art form," says Cem adding, "For example, in Russia, the schooling in this department is extremely intense, and I know from the sculptors' own words that they undergo four to six years of training under a sort of military discipline that could be even longer if they go on to graduate studies."

At present, there are 25 artists from the U.S., Canada, Brazil, France, the Netherlands, the Czech Republic, Latvia, Lithuania, Russia, Ukraine, Portugal, Spain, England, Italy, Switzerland, Bulgaria and Turkey that have designed and created the mega 3-D portraits of some of the world's most legendary Empire leaders. I asked Cem if there were any foreign sculptors who fell in love with Turkey and ended up staying. He happily replied that yes, a Spanish sculptor who met and later married a fellow Turkish sculptor from the festival ended up moving to Izmir.

The International Antalya Sand Sculpture Festival has been held annually since 2006. Cem says the Lara Beach administration contributed greatly to the start of this project by designating the vast area on one of Antalya's most esteemed beaches and allowing Antalya to be introduced to this unique art form. Every year, 10,000 tons of sand is used to create over 100 sculptures that are visited by approximately 150,000, making Sandland one of the biggest sand art events in the world.

There are sculptures of key figures from around 30 different empires from many civilizations and eras on display. Some of the most popular pieces on display are of the Viking God and King of Asgard, Odin, Nefertiti, Kum Kale, Selahaddin Eyyubi, William Wallace of "Braveheart," Richard the Lionhearted, Catherine the Great, Süleyman the Magnificent, Hürrem Sultan and the Ottoman emblem. I asked Cem how long a sculpture can remain standing and what happens when it rains, to which he said that some of the figures can last undisrupted for up to six months. However, he also pointed out that intricate details can be lost in heavy rainstorms. In that case, as soon as the weather clears, the sculptors get right back to work on restoring the sculpture to its original glory.

When asked whether he suggests people visit during the day or night, Cem says that it is really up to preference; however, it does get more crowded at night as people flock to see the sculptures animated by LED lighting and the 3D mapping show that brings these impressive figures to life. Cem says the intense interest in the 3D projection show has been way beyond their expectations with many visitors saying this is the sole reason they were drawn to the exhibition. "This is the first 3D application on sand sculptures in the world, and to be honest, it has been worth all of the effort it took to set up," says Cem. In the evening, there is also a cinevision documentary of the festival played nightly from 20:30 to 23:00.

During the day, however, children can take part in a 45-minute workshop on the art of sand castle making, and there is also an ATV safari and tandem paramotor options in the vicinity. Sandland is located approximately two miles down from where minibuses drop passengers off for Lara Beach. It is a lovely walk on a long stretch of beach filled with fun summer establishments. You can also talk to the minibus drivers in Antalya to see if they will be able to drop you right off at the entrance to Sandland. Tickets cost 15 TL for adults and 6 TL for children and are available at the onsite box office or by Biletix. Make sure to visit this unique exhibition before the end of November, when these impressive works of art are brought down in order to clear the sand to begin all over again
under a new theme next spring.