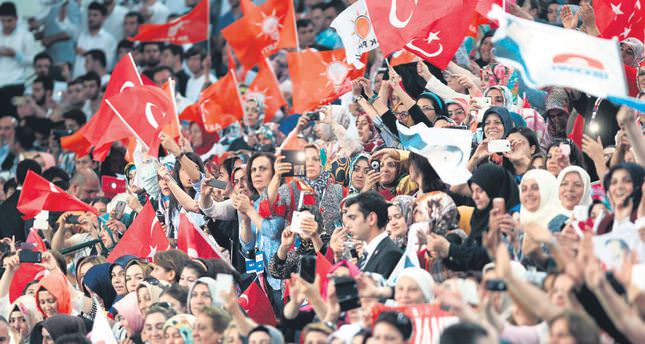 On Wednesday, the AK Party held its first extraordinary congress in Ankara. Those who attended the event were the first to say that it was truly extraordinary

I was fortunate enough to be able to attend the First Extraordinary AK Party Congress on Wednesday. Accompanying a candidate for a parliamentary seat from the British Liberal-Democrat Party, we were shown to seats among the foreign delegates. We sat down, and waited for the day to begin.

For those of you have seen the televised coverage, I don't need to explain the atmosphere, the excitement, the joy, the expectations. The popular old leader was handing over the reins to a popular new leader. There were feelings of trepidation - people wondering what the future holds for the party. But the speeches by the two leaders put the audience's minds at rest. The old leader was to be there in spirit, while the new had taken a firm grasp of the reins, delineating what the future held in a number of points, including education, the economy and foreign relations. The new leader had to give his speech after the old leader, an orator of practiced expertise, one who could drive enormous crowds to a frenzy with a mere gesture - undoubtedly a hard act to follow. but the new leader was equally skilled, giving an erudite, informative and encouraging address. What the future holds can never be crystal clear, but the firm, assured stance of the new leader gave the listeners great hope. One theme in both speeches was inclusiveness: a new Turkey for all. All the people in this country are to be included, no matter their ethnic or religious background. This will be a Turkey in which people will be free to express their origins, their faith. This may not sound earth-shattering to a foreign audience, but to someone who lives in Turkey, it is not only novel, it is heart-warming. This is an incredibly important message and one that should not be taken lightly.

Among the foreign delegates sitting with us were representatives of the former government in Egypt, including a couple of ministers. Maha Azzam was sitting in the same row as us. Ms. Azzam's work with Chatham house and her expertise are reflected in many articles, but perhaps the most pertinent is The Guardian article dated Aug. 15, 2013, discussing the Egyptian coup. Ms. Azzam is the head of the Egyptian Revolutionary Council, which brings together Egyptians living abroad who are opposed to the overthrow of Morsi's government. Next to me another member of the Revolutionary Council, Salma Ashraf, a girl whose maturity and gravity was far beyond her youth. All listened avidly as Erdoğan talked, watched with interest during the voting and hung on the words of Davutoğlu. Here was the democratic process that had been so cruelly wrenched from their hands being carried out in public, openly and assuredly.

As Erdoğan was wrapping up his speech, everyone stood up to cheer. My neighbors suddenly held up four fingers, "Rabia." Immediately, not missing a beat, Erdoğan returned the Rabia sign. In that huge crowd, amongst all the noise and hubbub, he noticed a handful of people in the corner of the stadium making a sorrowful political gesture; he responded with humanity and empathy. I was unbelievably moved and impressed, once again, by his sensitivity and acute awareness of everything around him. I believe that the members of the Revolutionary Council were equally affected.

Later during Davutoğlu's speech, I turned around to look behind me. To my right sat a man, middle-aged, in a suit. He was sobbing, hands on knees, making no attempt to wipe away his tears. Salma Ashraf whispered to me "I think he is Palestinian." His tears continued throughout the speech. What is important here is that the Egyptian and Palestinian observers applauded, cheered and cried because of the hope - the future that was promised on Wednesday. Both countries have suffered (and are suffering) terrible devastation, cruelty and inhumanity.

Whenever I am abroad and I say I come from Turkey, people's first response is "Erdoğan." Some people focus on Gezi, on questions of dictatorship, on how the former prime minister has "lost the plot." But when you talk to people from Muslim communities, be they in the Muslim world, Europe or North America, the response is 99 percent positive. Erdoğan is a leader; he is the last hope in a disintegrating world. He is someone who must be protected and defended at all costs. He is the future. Looking at the Egyptians and Palestinians who were with us, this was brought home once again.

It is not just Erdoğan anymore; Davutoğlu is also seen as a hope of the Ummah, the future of Muslims in a world where Islamophobia rages, where right-wing parties are gaining in popularity. The division that one sees between people's reactions are reflections of divisions in society.

The future in Turkey seems secure. But more important is the future of the world, the question of whether different sectors of society can learn to coexist. We need more than an inclusive Turkey; we need an inclusive world. We need a world in which perceptions are not manipulated according to ulterior motives. Over 20 percent of the world's population is Muslim. Many are victims of prejudice in the countries that they have adopted as home. Many are living in countries that are suffering from disorder and upset. The reason why this is happening is not a matter for discussion here. But what does need to be discussed is how these problems can be solved.

Only if people come together, put aside their suspicions of one another and join to fight hatred, racism and bigotry can these problems be overcome. If they are overcome, there is a better chance that budding democracies will have the chance to grow and thrive. The days of the Crusades are long gone; it is time that the emotions driving such conflict to disappear as well. If we work together, striving for a totally inclusive society throughout the world, a difference can be made.

Perhaps thinking that we can live in a world of peace and understanding is unrealistic and naïve, but that is no reason not to try to work towards that end. The other option is just too terrible to contemplate.
Last Update: Aug 30, 2014 2:10 am
RELATED TOPICS