Say 'cheese ' and take a selfie 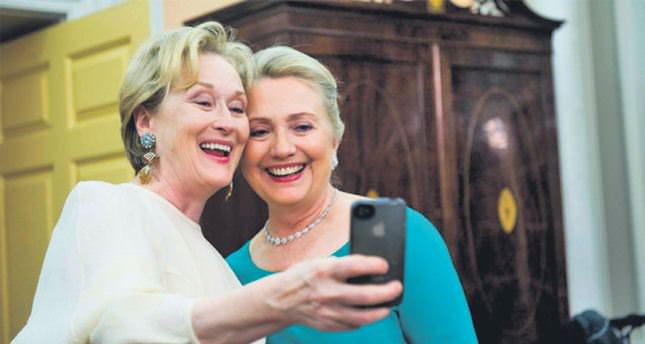 When we dig a little deeper we come to the realization that the concept of the 'selfie' is not as new as we portray it to be. It has certainly become a phenomenon with the invention of phones with front facing cameras, but selfies were taken and painted as early as the invention of a camera

Currently, heads of state - including our own President Recep Tayyip Erdoğan - are meeting at the 2014 NATO summit being held in Wales, U.K. to discuss the issues of our chaotic world. As it is the tradition, the presidents and other officials line up to have their photo taken at the end of the meeting. However, during this time, some of leaders take out their phones and take 'selfies' - a self-portrait typically taken camera phone or digital camera. It is possible to witness two foreign ministers posing for a selfie in one corner and two presidents taking a selfie in the other. In fact, these selfies often overshadow official summits and its topics. Selfies, which often cheer up the political atmosphere immediately, is news on its own.
We got used to seeing trends spread swiftly on social media, but this is a trend that has never caught on so quickly and influenced that big of a circle at the same time. For a while, the "Gangnam Style" dance was so fashionable that even brides and the grooms performed it with their guests at wedding ceremonies. Nonetheless, the selfie has become a habit that is acknowledged from those aged seven to 70.

However, the selfie is not actually a new "invention."The "self-portrait," which is a term used by photographers to describe shooting their own photos or photos that we take setting the clock of the camera, has existed long before the selfie trend emerged, which become widespread as front cameras of mobile phones became more common and ubiquitous. Surely, though, the selfie has an economy just like all other trends. Within time, these types of habits have turned into needs, and we began to hear sentences such as "your phone takes better selfies" instead of "my phone does not take a selfie."

Yet, selfies being a part of fashion and consumption is not all about the latest mobile phones.The real charm of a selfie comes from humanity's passion to look in a mirror and pose as whatever he or she likes. In other words, it stimulates our narcissism. As part of the time that we spend in front of the mirror is simply looking at ourselves, we hold the desire to freeze the moment and share it. This desire to show or to be seen is not always out of aesthetic concern, however. Statements such as "I was there," "I was with him/her," "I have been here," "I was doing that," "I am this" and "Here I Am" can also be the intended messages of selfies. So, the selfie is the embodiment of human expression that is expressed through one's self in an instant, renewable and diversified way.

The selfie and fashion have much in common.Selfies are a way for people who become slaves of certain social networking sites to say this is what I eat, where I was or how I look. Maybe with this feature, selfies are above everything that we call fashion because taking photos with your latest trendy clothes, decoration, hobby and even pet become everything that fashion stands for. On the top of it, it is possible to fake all of these on the small screen and tricky focus. Hence, we can perceive selfies as a way of excessive expression that also exemplify fashion trends. Actually, we do not care about "needs" yet; we desire to consume the newest trend as soon as possible as if it will meet our needs. Moreover, these trends often become something more than a signature of social status and turn into a psychological need. The effort for excessive othering and the ability to make a statement is really worth questioning. Especially, when religion comes in to the equation, it becomes essential to also question the notion of 'everyone is doing it, so I have the right to do it' attitude. Of course, it is not all about consumption; social media, selfies and cliché expressions have already taken control of our lives. Having all of these is debatable, but we should consider whether these things serve a purpose or not.

Meryem İlayda Atlas is Editorial Coordinator of Daily Sabah. She is board member of TRT, the national public broadcaster of Turkey. Atlas also serves as a visiting scholar at Çanakkale Onsekiz Mart University.
Last Update: Sep 05, 2014 3:24 am
RELATED TOPICS