The process is Important 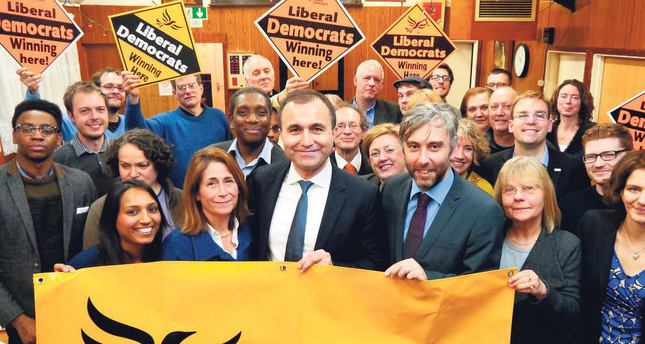 by Jane Louise Kandur Sep 06, 2014 12:00 am
I met Turhan Özen in London this summer. He is standing as a candidate for a seat in Parliament in the upcoming British elections. I had the chance last week to ask him some more personal questions to try to find out what makes a Turkish graduate student stay in Britain, take out citizenship and run for Parliament.

Özen was born in the mid-1970s in Anatolia. His father worked in Germany, while his mother stayed in Turkey to bring up the children. Successful in school, he came to Istanbul to attend a "science" high school. He obviously was successful here as well, for he secured a place in Middle Eastern Technical University in the electric-electronic engineering department. After completing his undergraduate degree, Özen went to the UK to pursue an MSC at Imperial College, London, and completed his PhD at University of Leicester.

Özen, no stranger to being a member of an under-represented minority, with a father in Germany and many years of study in Britain, decided to take out citizenship in his new country of residence.When asked why he made this decision, he stated that he felt at home in the UK where no one judged him for where he had been born or where he had studied in high school or university.

Indeed, these aspects of his background did not even come into most conversations; rather, people accepted him at face value. However, his taking out UK citizenship did not mean that he has turned his back on Turkey.Özen now has a mission, a goal. Becoming a citizen in 2007, Özen decided he needed to do more to represent the Turkish community. Standing for his local council in 2010 was the first step.

Although he did not get elected, Özen says that what he actually was trying to do was to show people that members of under-represented communities could participate and should participate in politics. He is firmly convinced that this is the best way for such people to make their voices heard in the government process and in policy making. This coming spring, Özen will be standing for election as a member of Parliament for the Liberal Democrats.

When asked why the Liberal Democrats and not the Labour Party or Conservative Party, more usual addresses for people from Turkish communities, Özen related how he had met the Liberal Democrats in 2007 and how impressed he was by their attitude to governing; they did not envisage a nanny-state like the Labour Party, nor did they endorse the cold individualism that supports the capitalism of the conservatives. He feels that the Liberal Democrats offer an antidote to the Machiavellian approach to politics. Rather than instilling fear in the people, thus making it easier to rule them, they encourage everyone to speak up. If the people feel that every voice counts equally, then there can be prosperity and growth in society.

One example Özen gave was the Liberal Democrats approach to employment; for example, fathers should also have the right to paternity leave, allowing them to stay home in place of the mother. Rather than creating jobs that are unnecessary to reduce unemployment or turning people out of jobs to ensure growth, people should be encouraged to job-share or companies should allow employees to work in a flexi-time system, thus getting more people working, without creating huge burdens on the state.

Although Özen did not win in the local elections in 2010, he has a better chance this spring. However, it is not the winning or losing that is his main concern. Of course, he would be over the moon if he won, but the important thing here, once again, is to act as an example for others. But this time Özen's main concern is to inspire young people from under-represented communities to become active in local and national politics. According to Özen, young people have great ideas and amazing energy, and it is his goal to get these involved in national politics. By showing these young people that it can be done, he hopes to draw them in. For him, it is the process, not the end result that is important. And he is enjoying the process.

The recent gains by UKIP in the European elections are worrying, he says, as they have "contaminated the British tolerance". Özen feels that the UKIP was able to make gains due to the irritation that the British people are feeling, not due to immigration, but rather due to the inability of the infrastructure to meet the demand and the poor services that are provided. A number of reforms are necessary to make the state more efficient and to ensure that it caters to the growing population.
When asked about how the Liberal Democrats would view any laws regulating headscarves in education, as there are in France and other European countries, Özen's answer was that the Liberal Democratic approach in this matter, as in all other matters, is freedom and equality. That is, if some communities are allowed to wear saris or turbans, then other communities should be allowed to wear any form of apparel that is important to them.
And these communities should be free to express their religions, beliefs or traditions, as they will, as long as they do not impinge on the rights of others.

He drew a parallel with the former British Empire. The British tried to impose their culture on the Indian culture, but in the end this turned out to be counterproductive. Rather than other cultures assimilating into British culture, British culture has assimilated to the newcomers. In Özen's opinion, Britain is a truly multi-cultural nation; the fact that the favorite British dish is curry and has been for many years, just underlines this phenomenon. New cultures and different attitudes are not something to fear; rather, they should be celebrated as such components lead to a richer language, a richer cuisine and a richer celebration.

There are many positive aspects to such an approach. When society is seen in this way, rather than trying to achieve a melting-pot, which implies that all people end up contributing to one, uniform dish, this is a tapestry; when looked at from afar, there is a cohesive whole, but when examined up close, the individual threads and patterns can be seen. The idea of such a rich tapestry is much more appealing than a white-washed wall; it can only be hoped that more parties in Europe come to see the sense of this ideal and try to draw in under-represented communities and minorities into the political system, allowing their voices to be heard.
Last Update: Sep 07, 2014 3:18 pm
RELATED TOPICS