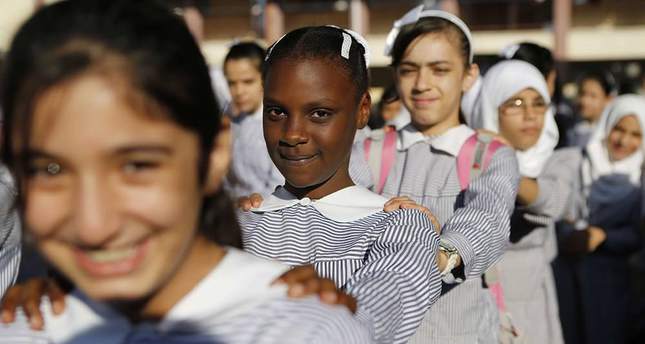 Some half a million Gazan children made a delayed return to school on Sunday after a devastating 50-day war with Israel that killed more than 2,100 Palestinians and damaged hundreds of school buildings

Some half million Gazan children made a delayed return to school on Sunday after a devastating 50-day war with Israel that killed more than 2,100 Palestinians and damaged hundreds of school buildings. Gaza Education Ministry official Ziad Thabet said the opening is for 230,000 1st to 12th graders attending public schools, 200,000 going to United Nations-run schools and tens of thousands enrolled in private institutions.

The opening was delayed for two weeks because of damage to schools and the diversion of U.N. school buildings for use as temporary centers to house tens of thousands of displaced people. Some 50,000 people are still being housed in the U.N. schools, the U.N. Palestinian refugee agency said.

Early Sunday the Gaza City streets were crowded with children dressed in a broad array of school uniforms, many accompanied by parents or older siblings. In the Al-Zaitoun boys elementary school, students pasted stickers with the names of fellow students killed during the war, as teachers struggled to cope with the badly damaged facilities a hole in a ceiling here, a partially collapsed wall there. "I'm not as excited coming to school as I was in the past," said student Tamar Toutah, 11. "I feel that something is missing. I asked about my fellow students, but some were killed or wounded."

Thabet said that unlike in previous years the first week of instruction in government schools will be given over to providing psychological counseling and recreational activities to help the war-weary children transition to learning. "We gave special training to more than 11,000 teachers and 3,000 principals and administrators about how to address students after the war," he said. Thabet said 26 Gaza schools were destroyed during the war, and another 232 sustained damage. He said government funding for education remains spotty, with no money provided for operational expenses since the formation of a unity government earlier this year between Hamas, the Islamic militant group that runs Gaza, and the Western-backed Palestinian Authority based in the West Bank.

UNICEF official June Kunugi echoed his concerns. "Investing in education is an investment for the future," she said. "Without increased support and commitment to their education and protection, an entire generation in Gaza could be lost."

The U.N. Palestinian refugee agency says it is providing 130,000 school bags and teaching aids for government schools, and that it has carried out training programs for nearly 12,000 school counsellors, teachers and supervisors.

Despite the assistance, teacher Akram al-Fares, 45, said the mood among his colleagues was dour. "We are in the same boat with the kids, we lived through the same very difficult days," he said. "But we are here together to prove that life continues, and not only can we teach, but also our kids can learn."

The war between Israel and Hamas-led militants stemmed from the abduction and killing of three ısraeli teens in the West Bank in June. Israel blamed the attack on Hamas and carried out a wave of arrests, which was followed by an increase in rocket fire from Gaza that prompted Israeli airstrikes and then a ground invasion. The fighting ended with an Egyptian-brokered ceasefire on Aug. 26.

The Gaza war -the third in just over five years- left more than 2,100 Palestinians dead, the majority of them civilians, including hundreds of children, according to Palestinian and U.N. officials. Israel says the number of militants killed was much higher and accuses Hamas of using civilians as human shields. On the Israeli side, 66 soldiers and six civilians were killed.
Last Update: Sep 15, 2014 10:37 am
RELATED TOPICS