Can a robot truly love a human? 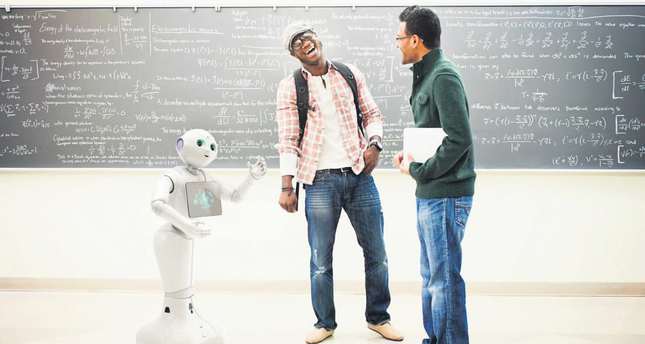 Robotic technologies are increasingly permeating our lives from unmanned aerial technologies to automated restaurants where robots deliver food. But scientists are skeptical about whether handing over every task to machines is reasonable or not and say the world may turn into a sci-fi movie in the future

Ray Kurzweil, who was hired by Google to design the world's biggest artificially intelligent search engine, predicts robots will be smarter than humans within 15 years. He says by 2029 robots will even be able to flirt. Obviously, we need time to see whether it is the right choice to leave everything in the hands of machines. Known for her studies in artificial intelligence and robotics, Dutch futurist Nell Watson warns against the possible disadvantages of robotic technologies. I had a chance to speak to her about the threat of future robots. Watson suggests the intelligence of computers will be comparable to that of a bee's.

According to the leading scientist, existing studies on artificial intelligence suggests that it poses bigger risks than nuclear weapons. I was surprised by her response and asked why robots are more threating than nuclear weapons. "People are now well-aware of nuclear disasters and take lessons from previous incidents. However, it is difficult to predict the behaviors of super artificial intelligence. It could turn everything upside down," she said. The possible changes will be either positive or negative, which needs to be thoroughly examined. Watson warns that such risks should not create a bias toward science and technology."We will gamble on our future, if robots get smarter and more capable," she continued.

Smart robots might even have the capacity to make their own machines, allowing them to create a world for their own. "It is hard to predict their capacity when they begin to learn something without instruction. Humans do the same to nature," she added. Watson further claims robots would eliminate humanity if we do not teach them human values. She said it is not enough to teach them how to respect, but the value of human life. It appears that people would decide whether to create benevolent super-artificial intelligence or not. "Perhaps, they will leave only a few humans in the world or treat them like animals. I mean they might establish special places for humans reminiscent of zoos," she remarked.

Considering the technological developments and necessary measures required over the next 10 years, Watson foresees that the transportation industry will be the first stage where robots take care of certain tasks because transportation is becoming increasingly smarter - such as automobiles that can drive by themselves. Journalism will be another profession that will use robots to produce computer-generated news articles and stories. Only traditional professions such as agriculture will be continue to be done by humans.

Further, physicians or surgeons currently use a wide range of robots during examinations and operations. If robots learn to control emotions, they could work as salesmen in shops. They will also have the capacity to detect human weaknesses via social media. Watson went on to say robotic technologies would be common in all industries, including finance, security intelligence and the military. "States will not be able to control artificial intelligence studies. We need studies on a global scale to protect ourselves from such threating scenarios," she concluded. Regardless of what Watson and others think machines will do, they continue to develop at a rapid pace. Here are some of them:

BABY-X: New Zealand-based researchers generated a computer-generated psychobiological simulation, which remembers the images it has seen before and recognizes words. If you talk with it in a gentle way, the baby releases virtual dopamine hormones and smiles. The communicative skills of Baby-X surprised many experts.

PEPPER: A Japanese firm unveiled a robot called "Pepper," which can read human emotions. The 120-centimeter robot recognizes voices and chats with people.

ROBOEARTH: Scientists at the Switzerland Federal Technology Institute implemented an EU-funded project called "RoboEarth" to design robots that can learn without human control. It has a system of networked computers and individual robots that can communicate with each other.

HITCHBOT: The robot attempts to hitchhike across Canada to explore whether robots believe in humans or not. The project is still in progress and the robot will give a detailed report about humans.