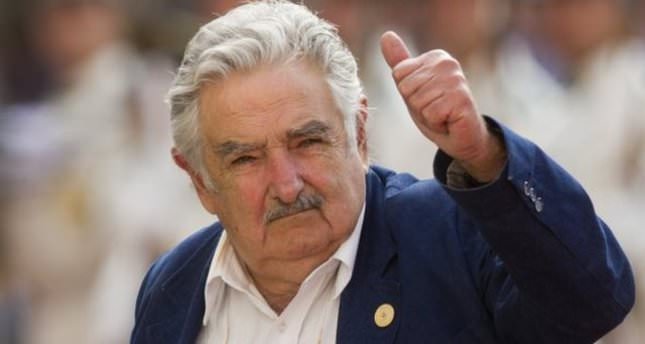 Quite a large number of statesmen could have made this statement. However, it only rings true with a few. Only a few are truly concerned with what will happen in the not-so-immediate future; in the next 10, 50 or 100 years. Most leaders want to steer the country through immediate dangers, finish their term, get their accolades, and then start earning big bucks by giving speeches and/or writing books.

The above vision is from a quote by Jose Mujica in an interview with the Economist in August this year; Mujica is the president of Uruguay, a country with a population of only 3.3 million people.

Mujica was born in 1935. At that time Uruguay was a prosperous country, sending beef and wool to war-torn Europe. It was one of the wealthiest nations per capita in the world. At this early date the working day was eight hours and there was maternity leave for women.

But this paradise started to disintegrate; the country was spiraling into poverty. At this time, when Mujica was 5, his father died; his mother was from a poor immigrant family, earning a living by growing grapes, and worked hard to support her family.

In 1960 young Mujica joined the Tupamaros movement, inspired by Che Guevara; this group mounted incredible raids; but they were also renowned for their sense of justice. After a robbery at a casino, the Tupamaros sent the tips back to the employees. However, this is not to say that people did not die as a result of their activities. In 1970 the police spotted Mujica and when he was asked for his papers, he is reported to have said "Here are my papers" as he pulled out his gun. He was shot six times and sent to prison.

Mujica escaped from prison twice, and was arrested four times. The tales of his daring does are film worthy (indeed, Emir Kusturica started making a film about Mujica's life last year). In one escape he was one of 100 people who tunneled out of the prison into someone's living room. A year later he is said to have been one of 12 people who escaped down a tunnel dug by the Tupamaros, this time into the prison from outside; they escaped on wheeled planks. Mujica spent a total of 14 years in prison, in squalid conditions, often tortured and in solitary confinement.

Once released, and with democracy restored in the country, Mujica joined the Movement of Popular Participation, becoming a deputy in 1994, and a senator in 1999. In 2005, Mujica became Minister of Livestock, Agriculture and Fisheries. In November, 2009 Mujica won the presidential election.

But Jose Mujica is not your normal president. Indeed, he was not a normal deputy; in 1994, he drove to the Chamber of Deputies on a Vespa. He never wore a tie, and often would appear, hair unkempt, wearing old leather sandals. Mujica does not live in the presidential palace; he prefers to live on his ramshackle farm with his wife, also a former revolutionary, Lucia Topolansky, who is a senator in the Uruguayan government. The president drives an ancient VW Beetle. The dog that follows him around the farm is a mongrel with only three legs. But more remarkable than all of this is the fact that he donates 90 percent of his presidential salary to charities, most notably to single mothers.

His policies are controversial. He has legalized abortion in a predominantly Catholic country. His explanation is that if abortion is not legal women will seek out illegal abortions, endangering their lives.

Mujica has also legalized marijuana, but not because he approves of it. Mujica says he has never smoked marijuana, although he enjoys tobacco. Rather, the sale of the plant and its derivatives, were controlled by criminal gangs. By legalizing the sale and taking it under state control, the state now knows who buys it, as well as depriving the drug dealers of their income; the funds are now channeled into the police force. Perhaps not a normal application, but one that has worked in Uruguay. To quote the president "We are proposing a market logic: if we can't beat them through policing, we are going to try to steal the market …so that this ceases to be a business. But we are not trying to foster an addiction…I believe that no addiction is good…." (Economist, August 2014)

Mujica has also legalized gay marriages. He states that there was a double standard at play here. The wealthy gay population (what he calls the "sexually ambivalent") could have relationships, and no one thought twice about this. However, the poorer sectors of society did not have the same rights. His implementation of this law was not because he is a strong supporter of gay rights, but rather because he is completely committed to supporting human rights. What is allowed for the rich should be allowed for the poor.

In Mujica's own words: "A left-wing vision of the world requires you to imagine a future utopia, but one doesn't have the right to forget that the most important thing for every human being is the life they lead now. The fight to make today better must become your central task." (The Guardian, Sept. 18, 2014)

Recently Mujica has come onto the world agenda for his efforts to ensure the release of prisoners from Guantanamo Prison; according to The New York Times in July, six prisoners will be transferred to Uruguay; Mujica insists that they be released, although the U.S. requested that they stay in Uruguay.

According to the president's own website, Mujica says that Uruguay will "take responsibility for dismantling a human disgrace [Guantanamo]" and "a lot of people shouldn't be locked up there…they made a business out of that prison."

According to an interview in the Uruguayan newspaper La Republica, Senator Lucia Topolansky spoke about the people incarcerated in Guantanamo, saying: "I don't call them prisoners…they have been kidnapped. They don't have trials. They don't have lawsuits. They don't have charges." She also stated that when the jail is empty she hopes that the U.S. would "return the territory to Cuba, which is who it should belong to."

On the global scale Mujica's concerns are environmental protection and trying to instill peace throughout the world, be it in Guantanamo, Syria, Uruguay or North Africa. Let's leave the final word to him: