Perhaps it is time to ask why? 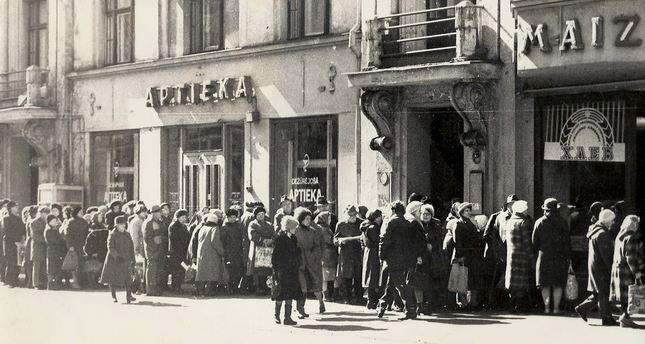 We all are familiar with the line in the supermarket or at the airport and the patience required. But standing in a really long line, one in which we have to stand for hours, is an art form and almost a thing of the past. Gone are the days in which we lined up without really knowing what we are waiting for

In the mid-1980s I spent 10 months in a small provincial town in the Soviet Union. Before I set off, I was advised by people who were "in the know" that we should take a string shopping bag with us, as this was an essential accessory. I was also given the advice that wherever and whenever I saw a line I should join it; don't waste time going to see what people were lining up for – just get in line. Ask questions only after securing your place.

This was a useful tactic. We managed to nab apples, the odd liver piroshky, oil and other rare essentials that managed to find their way to this little town. We had learned our lesson – see a line, join it and ask questions later.

In Britain we were well trained to wait in lines; the manners of waiting in line had been inherited from the war, when nearly everything was rationed and people had to wait in lines. While waiting for the bus, one would never line jump; waiting for theater or concert tickets one would strike up a conversation with the person in front, waiting patiently for your turn to come.

I came to Turkey after the lines of the1970s were over. But my husband would be sent by his mother to line up for oil, sugar or gas canisters. He would wait for hours and quite often he would be turned away. The supply of oil or sugar had run out and, tired and exhausted, he would return home empty-handed.

Recently, lines have seemed to become a thing of the past. Rationing is over even in Russia and everything is easily available. In certain parts of London people rush for the bus ignoring any kind of order or demeanor. Tickets are ordered online. I do remember young children lining up in America for the latest Harry Potter book. As much as I was unsure about the quality of the books, I admired the fact that children were so keen to find out what happened to their bespectacled hero that they were willing to line up for hours. Harry Potter might not be great literature, but it certainly switched a lot of kids onto reading. People still line up in Britain to get ground passes on the day of the championship at Wimbledon. There are in-depth guides on how to line up for this event including what to wear, what to eat and drink and the dimensions of tents – if you chose to use one – that are allowed.

Another line that has hit the news in the past couple weeks was the line for a new smart phone. People lined up for days, again bringing tents, food and entertainment. I get the mentality of lining up. I get the camaraderie of spending time with people to get something that is limited, i.e., a ticket or Soviet-era oil. I even get the idea that you want to be the first to see a movie or a book so you can laud the fact that you know what happened over your peers. But the mind boggles when people line up for something that will be owned by almost everyone in a few days' time.

And to top it all off, no new smart phone that has been released recently has offered great or striking innovations. They are slimmer, have better cameras and are prettier or shinier. But at the end of the day they are telephones. Recently a friend proudly showed off their new phone to me. I looked at my older, now "obsolete" phone, looked at their "new and latest" phone, and really couldn't understand what all the fuss was about.

Basically it seems like we have out-consumerized ourselves. When I was young, the latest fad, be it the Walkman (yes, I am that old) or a video player or computer was something we did not get instantly. We saw them, admired them, and then eventually, after saving up our pocket-money or tips or whatever, were able to buy them. Although there was a desire to be the first on the block to own this prized possession, we did not dedicate hours or days of our time to this end. We did not worry that whatever we were longing for would soon be obsolete.

Indeed, my kids used my Walkman for years, until it was replaced by the Discman and then by the mp3 player. That was the start of the slippery slope. After that it was a new phone and a new mp3 player every year.

We have come to an age where our disposable income is actually disposable. We seem intent on spending hundreds of dollars on upgrading technology that we don't really need. How many of the applications on our smart phones do we really use? Other than messaging, checking the traffic, finding our way on the maps and following the news (all very useful) I have a suspicion that most people use their phones for little else but making phone calls and playing games.

There will be some innovations in the next couple of years that will change our lives like the computer or the mobile phone. But the latest smart phone that has been released has not done this and I fear that the next one will not either. For the amount of money we pay for these phones we should be demanding greater advances.

Today, lines are few and far between. Maybe today before we join a line we should take the time to ask "what are they selling?"