Centuries later, Palu Bridge on Silk Route still as steady as ever 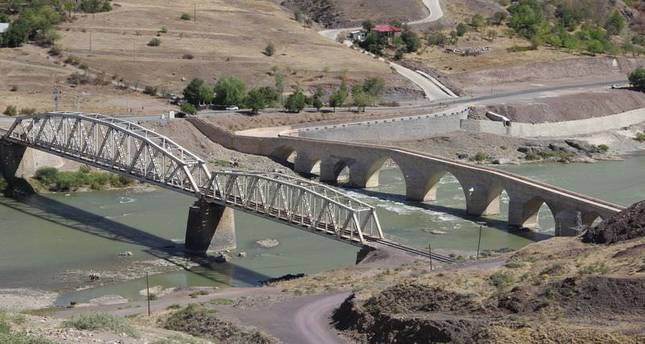 by Daily Sabah with AA Oct 13, 2014 12:00 am
Built over the Murat River almost 1,100 years ago, Palu Bridge, also called Murad IV Bridge, in Elazığ province challenges time. As it is located on the route of the Silk Road, the old bridge is described as "the bridge that connects Istanbul to Bagdad."

Palu District Mayor Mehmet Sait Dağoğlu told an Anadolu Agency correspondent that it was the first bridge constructed over the Murat River. "The Silk Road once passed over the bridge. This is why the locals lived in wealth for years," Dağoğlu added.

Certain historical accounts suggest the bridge was constructed in 16 years under the reigns of three Roman emperors, one of whom died from an illness, and the other was killed in a war. However, it might have also been built at the time of the Artuqids, which was a Turkmen dynasty that ruled the region from the 11th to the 12th centuries.

The historic bridge is 4.5 meters wide and 193 meters long. The most intensive restoration on the bridge was carried out under a commission from Sultan Murad IV. The Ottoman emperor stayed in Palu during his expedition to conquer Baghdad. The restoration of the bridge was completed in just a week, after which Sultan Murad IV continued his journey.

The historic bridge underwent many other restorations during the Ottoman period. In 2008, the district municipality initiated a tender for the latest renovation project. The bridge was re-opened for service in 2011.

Dağoğlu drew attention to the importance of the bridge in history. "Silk and silk-related products were transferred to Europe through this bridge," he said. The renovated bridge develops the district both in social and financial terms.