A race to cross more than the finish line 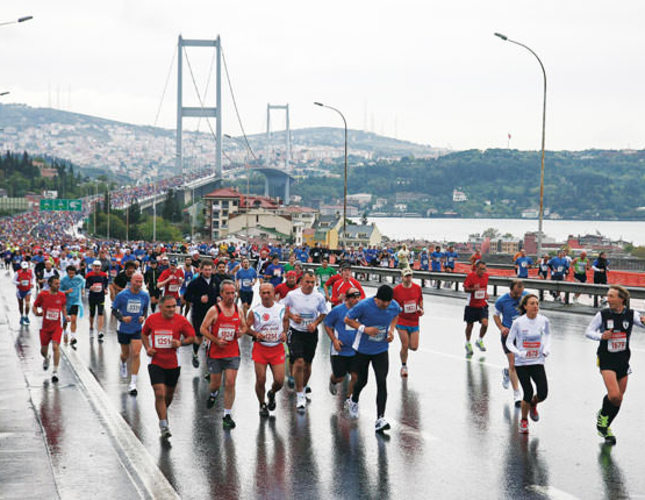 The 36th Istanbul Marathon which will take place on Nov 16, crossing two continents, aims to not only highlight the significance of sports but also raise funds to make investments in technology, services and social projects

The countdown has begun for the 36th Vodafone Istanbul Marathon with amateur and professional athletes already in training to make the run on Nov. 16.

Organizers held a press conference ahead of the run with Deputy Mayor of Istanbul Metropolitan Municipality Göksel Gümüşdağ saying the Istanbul marathon is one of the world's major runs, welcoming everybody from 7-to-70.

He said that the marathon continues to thrive and has grown year on year, adding, "This marathon is the biggest sports event of Istanbul Metropolitan Municipality."

With the city currently struggling through a shrinking running market, Gümüşdağ is hoping the marathon can help push sports in the city in the right direction.

"The most important reason the running market can grow is the Istanbul Marathon," he stated. "The Istanbul Marathon is more than a sporting organization; it is the ambassador of Istanbul. Moreover, the marathon is the sole marathon taking place over two continents. The number of athletes, both amateur and professional, running during the marathon is increasing every year and there are 20,000 registered for the event so far. It is expected that this year 25,000 athletes will attend to the organization and 30,000 athletes in the upcoming year. Gümüşdağ also said that athletes who run in the marathon stay in Turkey with their families after the organization. "As the marathon draws more attention, Istanbul also comes under the spotlight. The Istanbul Metropolitan Municipality and our sponsor Vodafone will do everything to make the marathon of Istanbul one of the biggest marathons in the world," Gümüşdağ said.

"We will meet all the international standards in time. We want this year's marathon to be unforgettable."

The Vodafone Istanbul Marathon will kick off with some new surprises. This year's marathon will be a "green marathon" as the consumption of eco-friendly products will be particularly encouraged. In order to make an effective start to the cause, the Marathon Memorial Forest will be erected. "We asked representatives of 118 different countries to bring a sapling indigenous to their homelands. Our memorial forest will be a first in the world," the General Manager of Sport INC. İsmail Özbayraktar said. Although the location of the forest has not been determined yet, the project has excited both participants and officials of the event. "We might use an area which is also used by a unit of the municipality focused on tree planting. There are also improvements in the running track. The warming area near the start and fan zones near the running track are being built as a part of renovations." Özbayraktar also said that they want the marathon to be comfortable for athletes and fun for spectators.

"We aim at making each international sportsman in the marathon a tourism ambassador for Istanbul," he said. The organizers are making plants to encourage Istanbulites to do sports and call for every Istanbulite to run for the love of their city. On the other hand, the co-organizers of the Istanbul Marathon are working together with the Provincial Directorate of National Education to introduce the concept of marathon running to little children.

"We organized a painting competition titled 'Marathon and Istanbul' among primary school students," Özbayraktar stated. Also, within the scope of a volunteering project conducted by Sport INC., 2,500 people from every age and profession will be working at the marathon. During the press conference, Assistant CEO of Vodafone Turkey Ender Buruk gave information about the motto of this year's marathon. He underlined that they have agreed upon the motto "There is a reason" noting, "The race encourages people to donate."

Through the Istanbul Marathon, Vodafone Turkey will collect donations on behalf of the Dream Academy, which is affiliated with the Vodafone Turkey Foundation to integrate disabled people into society through art. He also said that they began a digital transformation movement and added they will invest TL 2 billion to the project. He continued, "We will make investments in technology, service and social projects. Investments in sports stand out among others. We will continue to support sportsmen and sports. The company helps people to maintain healthier lives through sports."

Buruk further noted that they are attending international marathon fairs and have reached out to many foreign athletes to make Vodafone Istanbul Marathon one of the biggest marathons in the world. Furthermore, Vodafone Turkey holds two races for their corporate employees. "Nearly 1,000 sportsmen from 40 establishments attended the last race," Buruk added. As a communication company, Vodafone Turkey tries to support the marathon and help it to reach more people every year. In the previous year, 13,000 people ran in the marathon while nearly 120,000 attended as spectators. A total of 20,000 athletes have already registered to this year's marathon and this number is expected to reach 25,000.

One of the long term plans of the telecommunication company is including the Istanbul Marathon among the seven important marathon organizations of the world. "We do not only support the marathon and sports, we also support Istanbul. We truly believe that the more we promote Istanbul, the more we help to develop a sense of urbanism," Buruk stated. "We achieved the objectives in the first two years of the marathon and we want to continue doing it."