Fadime Örgü – A Mentor for Democracy 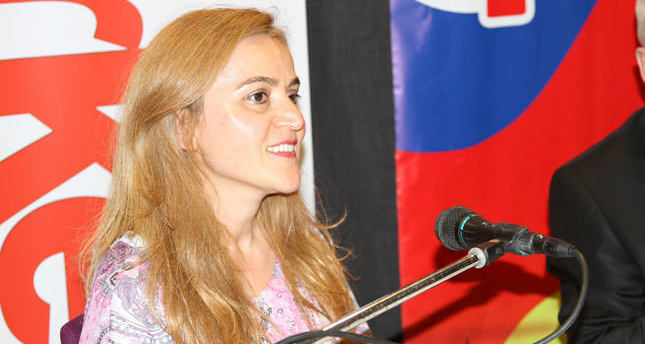 Later in the week I had a chance to get to know Fadime Örgü better. She dedicated a day from her busy schedule to giving me a tour of Holland and introducing me to local community leaders. We had a great opportunity to chat on the journey between Rotterdam, The Hague and Amsterdam.

Fadime Örgü was born in Turkey in 1968. However, soon after her birth the family moved to Holland. At a very young age Fadime found that she could help the Turkish women in her neighborhood by interpreting for them. She discovered that health officials were having difficulty in communicating with the Turkish women who had immigrated to Holland. Challenged by vocabulary that was beyond her years, at the age of 14 she took a course in health information. This course was offered at a middle school, with the lessons being given in the evening; that is Fadime went to normal school during the day and attended the health course in the evening. The first year involved courses in general health, while the second year of the course involved teaching techniques. At the end of the course Fadime received a certificate in health education. From 16 years of age on Fadime Örgü started to instruct people, in particular, the women in her region, in health matters. When she was 17 her activities were noticed by the chairman of entrepreneurs, who invited her to join the Liberal Party. However, young Fadime did not know what liberalism was, nor what the Liberal party embodied. The chairman of entrepreneurs explained to her that liberalism meant that both the state and the individual had certain responsibilities, that the state was not there to provide every need for every individual, that all people were considered to be equal, and as a result, people could advance through their own hard work. Fadime found this philosophy to be in keeping with her own outlook on life, and joined the party.

She attended higher education in Germany and London, studying English and German, Political Sciences and Management, as well as Linguistics. By the time she was 20, Fadime Örgü had made up her mind that she wanted to be a member of the Dutch parliament. At this time Fadime was in Strasburg, where she was the secretary general of the International Youth Organization. This organization lobbied for youth projects, including what today is known as the Erasmus Project. From 1989 onward, with the collapse of the Iron Curtain, Fadime started giving democracy lessons in Eastern Europe. One of the major concerns was that these countries did not have any civil societies, which are seen as the litmus test for democracy. At this date, Turkey also did not have any nongovernmental youth organization which could operate abroad, and was thus included in this process.

Tansu Çiller, minister of foreign affairs for Turkey at this time, came to the Netherlands; young Fadime was able to arrange a meeting with her. After this meeting Turkey was included in the International Non-Government Youth Organization, and young Turks were able to participate in an international civil society organization for the first time.

In the 1990s Fadime was one of the initiators of the Youth Parliament in the Netherlands, where young people discussed and lobbied on a number of issues. Here young people learned how to discuss topics, discovering how to tackle a variety of issues and preparing these matters for debate. The International Youth parliament met in 1994 in Turkey, with 21 nationalities coming together in Istanbul.

In 1998 Fadime Örgü became a member of parliament and served for two terms. When Fadime entered parliament she decided that she wanted to serve for two terms only, and then go onto other projects, rather than hanging on in parliament to the grim end. She was the youngest parliamentarian of her time, and continued to be the youngest throughout her two terms.

After her parliamentarian terms Fadime Örgü became involved in the media, which was a field that she had been active in before running for office. She was particularly active in film and television, directing a number of projects in advertising and cinema. Fadime also made television programs for Dutch television. Fadime works in the media today; but in addition to this, she spends a great deal of time mentoring politicians and businessmen, guiding them in how to make presentations, how they should present themselves on screen, and other matters concerned with communication and the media. Fadime does not limit herself to working with members from the Liberal party, but helps representatives from any party, as well as entrepreneurs.

The drive and ambition of this petite woman are exhilarating. She is a fine example of the Liberal spirit, working from a young age to achieve great milestones. At the same time, she is down-to-earth, practical and determined. How refreshing her true democratic approach, her sense and rationality. How reassuring that such a person is taking new politicians in the Netherlands under her wing. Women like Fadime give a positive message about the future of the immigrant population in the Netherlands; they are learning to coexist with the Dutch, maintaining their original culture, but taking up the positive features of the host culture, creating a new, strong synthesis. I feel truly privileged that I was able to spend a day being guided around the cities and introduced to the people of Holland by such a remarkable individual.