The special kind of girls night in 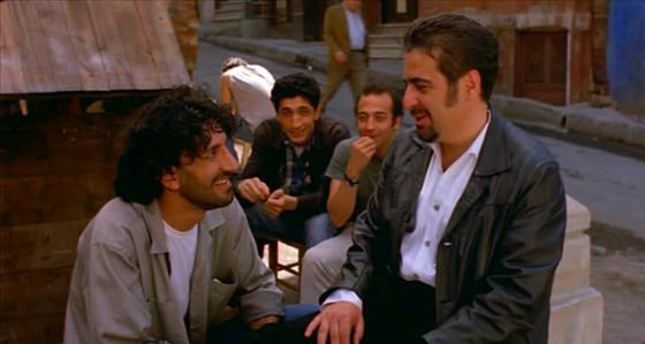 Sometimes the most memorable moments are created with dimmed lights, buttered popcorn and good company in front of the television watching a classic movie that defines culture

Who says that a night with friends or family has to be a fancy evening out on the town or an extravagant and costly dinner party? Sometimes simplicity is key. Nothing is more fun and relaxing then cuddling up with a pile of blankets, an overflowing bowl of popcorn and all your loved ones for that perfect movie night. There is just one problem: Choosing what to watch. We are here to help you pick from a range of Turkish cinema classics, for that splendid cultural evening in.

After serving a 35-year jail sentence, Baran, a bandit, is released from prison back into a city in eastern Turkey. Upon his release, it is no surprise that the world has changed dramatically. Still, Baran cannot help but be shocked to discover that his home village is now underwater because of the construction of a new dam. He then heads for Istanbul to take revenge against his former best friend, the man who snitched on him and stole his lover, Keje. Along the way, Baran teams up with Cumali, a tough young punk who finds the thief's old-fashioned ways rather quaint. When Cumali gets into deep trouble with a crime boss, Baran adds another hostile task to his agenda.

Sadik is a rebellious youth who was politically active as a university student and became a left-wing journalist in the 1970s, despite his father's expectations of him becoming an agricultural engineer and taking control of their family farm in an Aegean village. On the dawn of Sep. 12, 1980, when a merciless military coup hits Turkey, they cannot gain access to a hospital or a doctor, and his wife dies while giving birth to their only child, Deniz. After a long-lasting period of torture, trials and jail time, Sadik returns to his village with eight-year-old Deniz, knowing that it will be hard to right things with his father, Hüseyin.

Once Upon a Time In Anatolia
(Bir Zamanlar Anadolu'da): 2011

In the rural area around the Anatolian town of Keskin, the local prosecutor, police commissioner and doctor lead a search for a victim of a murder to which a suspect named Kenan and his mentally challenged brother have confessed. However, the search is proving more difficult than expected, as Kenan is fuzzy as to the body's exact location. As the group continues looking, its members cannot help but chat among themselves about both trivial matters as well as their deepest concerns in an investigation that is proving more trying than any of them expected.

Mahmut, a 40-year-old independent photographer, is a "village boy made good" in Istanbul. After his wife leaves him, he falls into an existential crisis. Then comes his cousin, Yusuf, who left his native village after a local factory closed down, effectively leaving over half the local men unemployed. He looks to Istanbul for salvation: A job on board a ship sailing abroad, which is both exciting and crucial to supporting his family in the desperately poor village. The distance between the two men is apparent at once and becomes increasingly pronounced. Whereas Mahmut has adjusted to big city life and suffers from many of its neuroses, Yusuf is a lonely, eccentric country worker with annoying nervous and hygienic habits and a sick mother back home he must somehow support. The actor playing Yusuf is actually the director's cousin, and the actor playing Mahmut is the director's friend, a non-professional actor.

Aydin, a former actor, runs a small hotel in central Anatolia together with his young wife Niha – with whom he has a stormy relationship – and his sister Necla, who is suffering from her recent divorce. As the snow begins to fall in the winter, the hotel turns into a shelter, but also an inescapable place that fuels their animosities.

A dredging ship is anchored in Istanbul for food and supplies. But six people mug the sailor sent to retrieve them and one weeks' worth of wages are stolen from him. The captain leads his men into the city to find the people who perpetrated this. Upon meeting the men, they manage to get back the money and take the woman in the group back to the ship.

Cahit is a German Turk in his 40s who has given up in his life after his beloved wife's death, and he is living a miserable life after turning to cocaine and excessive drinking. One night, he semi-intentionally crashes his car into a wall. At the hospital, he meets a girl, Sibel, another German Turk who has tried to commit suicide. She's sick of her family's ultra-traditional values and way of life and asks Cahit to have a white marriage with her out of the blue, so that she can become a married woman and get rid of her family's revolting pressure. Cahit is turned off by the idea at first, but then he agrees to take part in this plan. As Sibel frankly tells him upfront that she is interested in absolute freedom involving other men to which he agrees, they live as roommates with separate private lives for a while. Then things take a different turn, and though they are no longer two indifferent roommates, their love story will not be anywhere as simple as any other.

A harsh portrait of Turkey, its people and its authorities shown through the stories of five prisoners given a week's home leave and the problems they encounter in adjusting to the world outside.

After picking one of these movies, there is just one thing left to do: Dim the lights, sit back, relax and enjoy the show.