Building houses for the poor with 3D printing 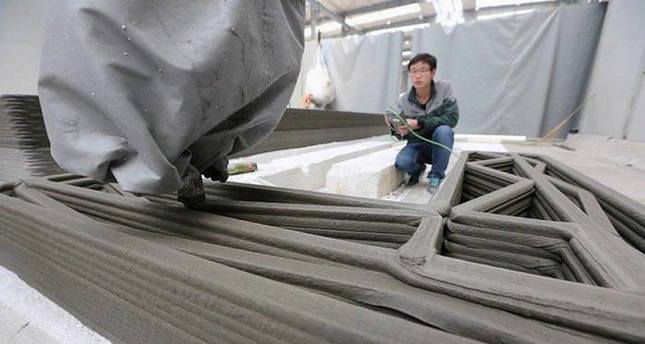 by Selçuk Eren Nov 07, 2014 12:00 am
The scientific community claims that in time and after much research and development teleportation, time travel, invisibility cloaks and interplanetary travel will no longer only just exist in movies, but in real life as well. However, according to the common conclusion reached at The Big Bang Fair U.K. Young Scientists and Engineers Fair that took place in London, the invisibility cloak featured in the Harry Potter series and interplanetary travel will be possible within 15 years. Moreover, scientists suggest that transportation and time travel will be available by 2080 and 2100, respectively. As it appears, robots will be important parts of our lives and our houses will be similar to those in the cartoon "The Jetsons" in the near future thanks to the new technological developments. However, how will the poor benefit from these innovations?

Currently, various aid packages are being delivered using unmanned aerial vehicles, also known as drones. This method is especially employed while sending aid to regions with security problems. For instance, robot doctors capable of treating patients have been deployed in certain medical centers in Africa and Asia. Doctors in the U.S. and Europe connect to these robots via the Internet at a certain time of day and communicate with patients through the screens attached to the robots before diagnosing the patients. Tablet computers are being used to increase literacy rates as well. However, 3D printers will be the biggest technological development for the poor according to many experts. So far, scientists have been able to produce guns that can shoot real bullets as well as a car using 3-D printers. They are also able to produce prosthetic hands and feet, tracheae and even a skull. Experts point out that houses can be built for the needy with these printers, especially since the U.N. indicates that over 800 million people live in unhealthy houses and experts claim that houses similar to sheds can be built in undeveloped countries with 3-D printers.

The Italian company, WASP, set out to make millions of people house owners. According to company officials, the printers will be easily transported to an area in need and the company has already developed a three-armed printer that was used to build a shed during its introduction. The company later released a statement that said the printer used mud to build the shed. The sheds constructed with mud are much more practical, durable and safe compared to those that are traditionally built with wet clay. Another advantage of houses built with 3-D printers is they do not require any transportation of construction materials and are ready to be inhabited within a very short time. WASP executive Massimo Moretti said, "The houses that will be erected with 3-D printers will cost almost nothing as mud is an easily supplied material anywhere in the world. Two people can set up the printer in two hours, however it is still in the trial phase. We are planning to build our first houses in undeveloped countries starting next year."

Architects from the Netherlands will soon conduct a study on the practicality and sustainability of 3-D printed houses, and they have already begun working on a project titled 3-D Canal House. The Amsterdam-based project aims at building a canal house that will have 13 rooms with custom made 3-D printers using biological waste for the foundation of the construction. Executive Hedwig Heinsman of Dus Architects, the company behind the project, said, "We are currently pressing bio-plastics that are composed of 80 percent vegetable oil." Furthermore, the furniture in the house will be produced with 3-D printers using vegetable and fruit waste. The company expects the 3-D Canal House project to be finalized in 2016. Heinsman also said that 3-D printed houses can be built in both undeveloped countries and regions hit by natural disasters. It is claimed that these types of houses, which will also be built without the need to produce or transport construction materials in a very short time, will be eco-friendly and will not create any construction waste. While Dutch and Italian companies develop their 3-D printer projects, China, which produces 1.5 billion tons of construction waste per year, has already begun building houses with 3-D printers. The Chinese company WinSun recently built a 10-room single floor apartment building within 24 hours. Additionally, each apartment only costs $5,000 apiece. WinSun claims that carbon emissions will be reduced to a minimum by building houses with 3-D printers.