‘Great Britain,’ the monarchy and all that poppy business 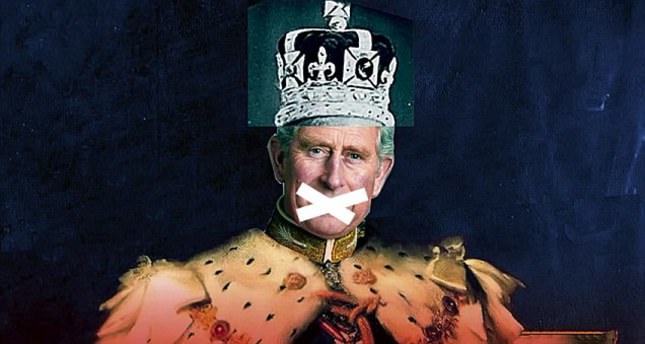 In a similar way to Christmas having been transformed from a period of 12 days to three months, starting in October, Remembrance Sunday has now spread over the whole of November and features two theater shows in the West End in London

Like Christmas having been transformed from 12 days to one day and then to a three month period that starts in October, Remembrance Sunday has now spread over the whole of November, starting with Guy Fawkes Night and rolling into the second half of the month with poppy wearing, poetry readings and conferences. It is true that this year marks the centenary of what is aptly called the "war to end all wars," still I doubt if any of this is going to abate next year.

I remember myself wearing a poppy for a day in London back in 2002 with a sense of solidarity with people over the age of 50 who seemed to be the only people wearing them and who might have known people who fought in the war. But I also felt a sense of subversion, the predecessor of my country having fought "on the other side." I loved England as much as the next girl (Scotland, Wales and Northern Ireland are alright), but I had no illusions about what it meant to be on the receiving side of "British heroism," something that was compulsively celebrated this year without much thought as to what that heroism cost other nations. I don't think I'll be wearing a poppy again until the jingoism stops and the war is remembered not as a testimony to man's courage but to his folly and criminal tendencies.

The centenary has indeed brought about soul searching in all branches of the establishment, media, entertainment and education and we can expect more of that next year as Britain is planning to celebrate the 800th anniversary of the Magna Carta. The home of democracy and all that.

These themes of who we are and what the essence of our governing system is are the subjects of two shows in the West End that work as perfect companion pieces. The names sound like two parts of a trilogy that is seeking a third: "Great Britain" and "King Charles III."

"Great Britain" is a very, actually extremely, thinly-veiled play about the phone hacking scandal whose repercussions, court cases, libel claims, establishment shuffles and Hugh Grant tweets continue to this day. We get a glimpse of what it was like in the News of the World offices, rebranded as The Free Press in the play. There is not a moment of silence and/or inaction in the play, as our anti-heroine – the would-be editor Paige Britain – reveals to us the methods the tabloids use to get the news stories they want. As you can imagine, for The Free Press, it is not about reporting the news, but about actually manufacturing and then breaking it. The central news that is manufactured in this piece through flimsy leads obtained by phone hacking is that a father has been an accessory to the murder of his own daughters, which turns out not to be true after the father commits suicide in jail. Then the police try to cover up the hacking in order to hide their own misdemeanors. Next, the paper supports a particular politician in a vote and the audience gets to witness how the "rulers" of the country, the press, the police and the politicians, are in cahoots with one another to keep the power of information and money among themselves. Yes, we all know that, and when one thinks about it a minute longer than necessary, it feels a bit too morbid to be entertaining ourselves with this sordid state of things. But laugh we shall, even if the ship is sinking.
The "breaking" of the news, on the other hand is done cleverly on stage with several screens that double as the newspaper's office walls. Each new scene starts with a new headline projected onto the screens – each headline during the three-hour play is about immigrants. Whatever politician or cricket player the paper has gathered dirt on in the previous scene, the main headline of the paper remains the same. Immigrants did this, immigrants did that, immigrants ate my hamster, ending, I believe, with immigrants melt the arctic. If I had some misgiving about the exaggeration of The Free Press's proclivities, I had a renewed faith in the play when a couple of days later in Sainsbury's, I noticed the Daily Mail headline "There Are Too Many Immigrants." Unimaginative and stale, but hey, it sells. I do not claim to know the British newspaper industry all that well, but when the Irish owner (not Australian, mind you) of the paper introduces a new editor despite our anti-heroine's expectations of becoming the new head, one of the actresses that doubles as a police officer enters the stage with long, curly hair that is auburn, not ginger, and a not too obvious, slightly put on, Roedean accent. Not Rebekah Brooks, though; of course not.

The two aforementioned pillars of the British nation, tabloids and Sainsbury's, indeed, like horse and carriage, appear in the second "state of the nation" play as the concerns of the royal family. Not only the accents, but also the rhythm has changed from "Great Britain," as Mike Bartlett, author of "King Charles III" decided to write this play in verse in the Shakespearean tradition. And despite the very contemporary context, it works – as it worked for audiences 500 years ago.

Yes, at least in fiction, Prince Charles gets to be king, and then shortly after, the liberal man that he is, declines to sign a bill that curtails the freedom of the press. I almost expected Adam James, who played the prime minister in this imagined future, to do an aside and whisper to the audience "If you do not support my bill, go see 'Great Britain' and learn what awful mischief your 'free press' gets up to." We see Charles uttering words of endearment to Camilla that elicits guaranteed laughter from the audience. Princess Diana's ghost appears, very Hamlet-like, to both Charles and William. The everyman character in the play is an art student who gets to see the royals, and stands as entranced as we are to see these larger than life figures "up close." She is Harry's new girlfriend who he met in a club, and it is she that takes him on the plebian tour, including Sainsbury's. While Charles gets all the soliloquys as the title role, the real soul searching scene comes when Harry tries to get a kebab after Charles has refused to sign the bill. We have just seen scenes of protests calling for the end of the monarchy and a stage full of actors wearing V for Vendetta masks. The scene at the kebab shop works as the gravedigger scene in Hamlet, the "groundling" explaining to the audience the strange antics that the royals get up to. The kebab seller is full of advice about getting his girlfriend back, but more importantly, he has a word or two about the stalemate the country finds itself in. Is this going to be end of the monarchy? What will we be without a queen or king? What will being British mean then? "You will be a republic." I wanted to shout from the stalls, like you were for a couple of years under Cromwell, you know, a republic, Magna Carta and all that. If there's one claim in the play, it is the triumph of the middle classes, as Kate, seizing the moment, manages a coup, promising the prime minister that William will sign the bill if parliament supports him as king after the voluntary abdication of King Charles. When they promise not to speak to him ever again if he does not quit, Charles – the doting father and grandfather that he is – cannot bear the idea of separation from his brood, and so acquiesces. William and Kate essentially promise parliament that theirs will be a hollow crown with no presumptions of "ruling." It is a healthy reaffirmation of the fact that the crown is really only a tourist attraction – a selling point.

In "Great Britain," Paige Britain gets transferred to the U.S. to become a talk show host, and in "King Charles III," the reign of William and Kate promises to attract even more tourism. After all that soul searching, England, Britain, the United Kingdom, whatever you want to call it, comes full circle to business as usual – a suggestion that countries are indeed run like and indeed by corporations. Particularly after the hollow coronation scene in "King Charles III," one is left thinking less "ich diene" but more "plus ça change."