An engaging life story from China to Istanbul: Celaleddin Wang 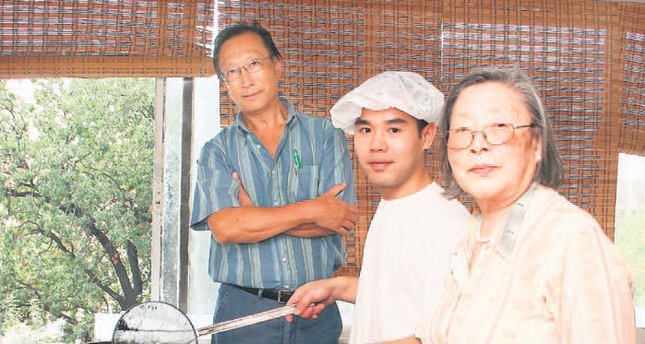 There are many Chinese restaurants in Istanbul that offer culinary delights. One of them, ‘Wang Restaurant’ in İstinye run by Kurban Wang, has an interesting story that dates back to the grave of Celaleddin Wang in Edirnekapı’s old cemetery

It has been almost a half-century since the opening of Istanbul's first Chinese restaurant and now many others have added Chinese food options in their menus. Some of them employ senior Chinese chefs while others have special sections for traditional Chinese dishes. More interestingly, the stories behind Isa Wang's "Mai-Ling Chinese and Sushi Restaurant" in Feneryolu and Kurban Wang's "Wang Restaurant" in İstinye date back to the grave of Celaleddin Wang lying in Edirnekapı's old cemetery. His gravestone probably catches the eyes of those who walk through the metrobus station close to where the cemetery is situated. What makes it interesting are some Chinese words and the name of Celaleddin Wang. His gravestone is reminiscent of the first page of an interesting autobiography harboring hope, dreams, excitement, disappointment and hardship.

Wang was a Chinese Muslim born into an intellectual family in Sichuan in 1903. When he was studying at Beijing University in modern-day Beijing, he developed a special interest in Arabic and Turkic languages. In 1928, he came to Istanbul to continue his education. Wang attended Istanbul Darülfünun – the former name of Istanbul University – to study history in the early years of the Turkish Republic and graduated in 1931. He took a break during his Istanbul adventure and returned to China where he began his political career as a deputy. Wang's interest in Turkish history did not diminish in those years and he acted as the head of a delegation sent to Muslim countries around the Middle East in 1935 by the Chiang Kai-shek government. He continued to represent his country during visits to different regions three years later. According to his wife, Fatma Wang, he returned to Istanbul in 1938 when Mustafa Kemal Atatürk died.

His years in China passed within an unstable political atmosphere. He was assigned to senior positions in the government and also worked in Turkestan before the Chiang Kai-shek government disbanded in 1949 due to the political struggle in the country. There were conflicts between opposing political groups and amid such political distress, Wang left his homeland with his family and 200 soldiers. He embarked on a demanding two-month journey to the Himalayas with his wife and children and later arrived in Pakistan. Then the famous Turkologist Zeki Velidi Togan, to whom Wang wrote his letters during the journey, invited him to Istanbul where the Wang family arrived in 1955.

They stayed in the Aksaray district and then Feriköy. Finally, the Wang family moved to Taksim's Aydede Street. Unfortunately, they first had to leave four of their children because the landlords did not rent flats to big families, but when they moved to their new home, he took his other children with him. Wang was a lecturer of Chinese language, but not paid well enough to bring up his family. With the help of his friends, he opened Istanbul's first Chinese restaurant in Cağaloğlu with his Turkestani partners. Everything was going well for Wang at first, but then his partners disappointed him because he was not a Turkish citizen nor was he an official partner of the restaurant due to his academic position at the university. Their collaboration came to an end after only a week. When he wanted open a new restaurant in Taksim, former Deputy Kahraman Arıklı – the father of Turkish journalist Ercan Arıklı – and İhsan Bingüler, a municipal member, lent the necessary money to him. Now, the Wang family remembers these two names with immense gratitude.

Wang continued his academic studies while operating his new restaurant. His students who learned Chinese were Turkey's first lecturers in this language. He translated the Quran into Chinese, but unfortunately lost his bag carrying the translation. Aside from his published articles, Wang wrote books as well. Her daughter, Rosey, presently continues her father's studies in Malaysia now. The successful professor compiled various Chinese resources about Turkish history, and even requested a rich book collection of 1,800 volumes from the Taiwanese government and brought them to Istanbul.

Indeed, it was hard to raise eight children. However, Wang and his wife used to pay particular attention to education and pushed their financial situation to its limits in order to send their children to private schools. He wanted his children to learn foreign languages and sent three of his children to French schools, one to a German school, three to English schools and one to an Italian school. Those years passed with many hardships, however, and Wang passed away after a stroke. On Jan. 23, 1961, his friend Togay highlighted Wang's accomplishments with the following quote, "Wang used to say Turkey would be his last station and [he would] die here. So did he. Unfortunately, his wish was realized too early. Celaleddin was a very humble person and never showed off. He even used to avoid talking about his sufferings to bring up his family. On Tuesday, we were talking about the schedule with us prior to his class at 2:00. Everything changed solely in one hour when he died. May god rest his soul," he said.

Now on her own, lonely mom Fatma Wang managed to bear the educational expenses. While they lived comfortably in China, they had to start over from scratch in Istanbul. As she worked day and night at the restaurant, all the kids studied hard at home and they all finished school successfully thanks to this dedication.

As the year passed and the children grew up, some of them traveled to distant countries – reminiscent of the long journeys of their father. Rosey Wang Ma now lives in Malaysia and adds her signature under successful works like a follow-up of academic curiosity of her father. She conducts research on the Chinese diaspora and she is an important person whose opinions about the history of Chinese Muslims are considered valuable. She married a Turkologist in Taiwan named Makbule Wang Shuli, and she supports researchers with her Turkish knowledge as indicated by acknowledgements in different works. Fatma Wang now spends her days at her home in Sarıyer as a happy mother with a family of 34 including 8 children, 22 grandchildren and 3 great-grandchildren.

The story of the Wang family, that spent bittersweet days in Turkey and is now a part of Istanbul's multicultural identity, shows us that one should never give up being hopeful for the future, as Wong's grave in Edirnekapı Martyr's Cemetery reminds us again that the most important inheritance that a father can give the world is well-educated children.