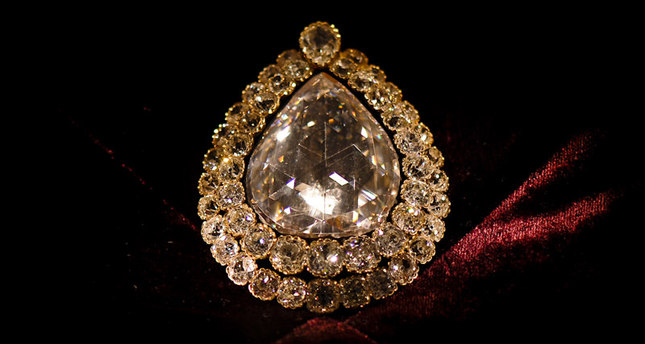 by Nur Özdil
Nov 27, 2014 12:00 am
Children and young students who are distracted because of fatigue, crowds and the overwhelming amount of information about the historical places liven up when they see the Spoonmaker's Diamond in the Imperial Treasury Room. Although there are many valuable pieces of jewelry showcased in the treasury room of the palace, the Spoonmaker's Diamond is one of the rare pieces that remain in the recollections of the students even after years have passed. What makes the diamond – mentioned in novels, films and comics – so different from others is the rumors surrounding it. Rumor has it that the diamond was discovered in a trash dump by a man in Eğrikapı, but because he was unaware of its value, it passed from hand to hand until it finally ended its journey at the Topkapı Palace. Perhaps it is our fondness of stories that makes the Spoonmaker's Diamond so memorable.

Jewelry has always been on demand and it has been used not only as an accessory but also as a sign of wealth throughout history. Royalty and aristocrats wore precious stones to impress their subjects as well as hostile states. Wealthy people and the sultans of the Ottoman Empire began incorporating more jewelry into their attire and decorations during the 16th century compared to the earlier years of the empire because they plundered precious stones from the lands they conquered. Moreover, the precious stones discovered by the Spanish during their conquest of South America also found their place at the Ottoman palace. The jewelers who were brought to Topkapı Palace all around the empire also helped to build a jewelry culture.

Although none of them are as popular as the Spoonmaker's Diamond, Topkapı Palace is home to many goods and adornments that are ornamented with precious stones, including flamboyant turban ornaments called sorguç. A sorguç, which is the East's equivalent to the West's crown, is a symbol of power and authority that was worn by Ottoman sultans on their quilted turban. Each sultan wore a maximum of three sorguçs and when they died, these sorguçs were placed on the quilted turban in front of their tomb.

Ornamented goods came before adornments during the Ottoman Era. The sultans' thrones were the biggest jewel-ornamented items that are displayed at the palace; however, the throne of Ahmed I is different from others. The throne, which is a fine example of 17th century classical Ottoman art, was designed by Mehmed Ağa, the architect of the Blue Mosque. Also known as the Arefe Throne, this distinctive piece was used by the sultan one day before eid festival celebrations took place at the palace. As Ahmed I did not appear in public on this throne, he was not depicted as sitting on it in a painting.

Almost everyone who visits Topkapı Palace wonders why there are such few pieces of women's jewelry on display. It is because the sultan was the most important person in the palace during the Ottoman era and women who left the harem were not asked to return their jewelry. However, since the goods and adornments ornamented with precious stones that were presented as gifts to pashas and ministers were given back to the palace after their deaths, which is why there are many pieces of men's jewelry on display.

One of the most modest pieces on display is the seal of Selim I, located on the door of the Treasury Room. The seal, which has "Sultan Selim Shah" written on one side and "Tevekkülî alâ Hâlıkî" (Submission to My Creator) on the other, has also an interesting story.

When a new sultan ascended the Ottoman throne, he visited the Treasury accompanied by many state officials. During their visit, the Treasury's chamberlain checked the seal of Selim I before the sealed doors were opened with a ceremony. Returning from his Egyptian campaign, Selim I said, "If one of my grandchildren can fill this treasury, he should seal it with his own seal otherwise the Treasury of the empire shall be sealed with mine." And since none of his successors were able to fill the treasury like he did, its door was always sealed with Selim I's seal until the Topkapı Palace was converted into a museum by the order of Mustafa Kemal Atatürk in 1924.

The jewelers of the Ottoman palace also tried their best to preserve the originality of precious stones used in adornments. The finest examples of this modest style can be seen in almost every piece, from the water bottle of the sultans to their thrones. Made by the order of Sultan Mahmud I, the Topkapı Dagger is a perfect example of classical Ottoman jewelry art. The dagger, which is ornamented with emeralds and diamonds, features an extraordinary still life drawing along with a watch whose brand is called London. Often mentioned in the 1963 film "Topkapı," the dagger was a gift to Nader Shah, the ruler of Iran; however, it was returned to Istanbul when the Shah was assassinated. The dagger awaits its visitors along with many other pieces of Ottoman jewelry at the Treasury Room of the Topkapı Palace.