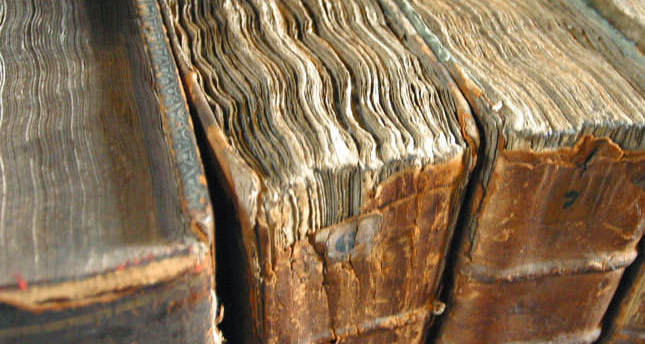 Fires in Istanbul had been a centuries-long problem for the Ottomans. The libraries of the city, which were contructed with thick walls and brick roofs, survived the fires over the centuries and have kept the city’s memories alive

Many books, documents and other cultural treasures that stood as a record of Asia Minor's history disappeared in some of Istanbul's famous fires. Many years ago, those who learnt from such unfortunate incidents constructed fire-resistant libraries. The walls were almost one meter thick and the domed roofs were made of brick. Iron bars were placed on window shutters for further protection, and when a fire broke out somewhere nearby, "hafız-ı kütübs" (librarians) used to close the windows immediately to avoid flames entering the library. This is why some libraries were not damaged even when devastating fires obliterated everything in their path. Even earthquakes were unable to destroy the old libraries of Istanbul. Thousands of manuscripts, works of calligraphy, miniatures, maps and books which lay on the shelves of these reinforced libraries survived natural or man-made disasters. The Şehid Ali Pasha Library, located between the Şehzade Mosque and Vefa High School in Istanbul's Fatih district is a good example. Erected in 1715, the historical library has a collection of 3,000 books. It has survived disasters many times – even a large fire that burned down all the buildings surrounding it. Fig trees now veil the library's domes. Similarly, the Laleli Library, which dates back to 1802 and displayed almost 4,000 books, continues to stand despite enduring numerous earthquakes and fires. All books at these two libraries – more than 7,000 in total – were later transferred to the Süleymaniye Library.

One rich library that was burnt in a fire was housed in Istanbul's Yenikapı Mawlavi House. Fortunately, the library building survived thanks to its stone vaults. Certain historical accounts also say all books were recovered except for the three taken for that night by Celaleddin Efendi, the Sheik of the Mawlavi house at the time.

When discussing Istanbul's libraries, it is worth elaborating upon their historical development over the years. Upon the arrival of paper in the Islamic world, the founder and first caliph of the Umayyad Dynasty, Muawiyah I, established the first library. Later, many scientists in the Abbasid Empire made their personal libraries. For those who were unable to access books, Abbasid Caliph Harun al-Rashid founded the first public library, Bayt Al-Hikma (The House of Wisdom), which was also an important intellectual center early in the ninth century. There, thousands of books written in different languages were gathered under the same roof. The House of Wisdom turned into a major educational institution with its rich collections and large staff. Special study rooms were allocated for translators, readers and scientists. Under the Umayyad Caliphate of Cordoba, a giant library filled with 400,000 volumes of books was built. Unfortunately, the celebrated library was looted first by the Berbers and then the Spanish.

The Turks took over this vast cultural heritage. Libraries were established in mosques and madrasas under the rule of the Seljuks and Ottomans, and the Seljuk-era Grand Mosque in Diyarbakır housed 1.4 million books. The Ottoman Empire built its first library in İznik followed by the second in Edirne commissioned by Lala Şahin Pasha. Ottoman libraries belonged mostly to the palace, mosques or madrasas, but Grand Vizier Köprülü Fazıl Ahmed Pasha commissioned the erection of the first individual library in Istanbul's Cağaloğlu Neighborhood, which still exists in the same location. Indeed, Ottoman royals, statesmen and ulamas (Muslim scholars) competed with each other to open more libraries. Among the most renowned Ottoman-era libraries mentioned are: the library established by Sultan Mahmud I in Ayasofya, the Atıf Efendi Library in Süleymaniye, Koca Ragıp Pasha Library in Koska and the Şehid Ali Pasha Library. Furthermore, dervish lodges allocated special buildings to be used as libraries, including the Şazeliyye Dervish Lodge in Unkapanı built by Hadice Sultan and the Murad Molla Library in Fatih. Ottoman Sultan Mahmud II's Mahmudiye Library and Shaykh al-islam Arif Hikmet Bey's own library were very famous in Medina as well.

These libraries also featured a well-organized network of book sharing. A team of "hazins" or "hafız-ı kütübs" studying physical or social sciences conducted administrative works and scientific studies there. Translators were responsible for translating books from different languages, while dedicated copiers made copies of new books, binders took care of old and worn-out books and library guides used to assist visitors.

Sultan Abdulhamid II was known for his passionate interest in science and books. The library that he opened in Yıldız Palace was very popular, and he regulated all the libraries across the empire as well as founded public libraries in big cities. Special book catalogues were prepared upon his order, but when the sultan was dethroned in the 1909 coup d'état, Yıldız Palace was pillaged. Thankfully, the palace librarian, Kalkandelenli Sabri Efendi, was able to stop the looting or burning of the books; these books are now on the shelves of Istanbul University's library. Sultan Abdulhamid II built Turkey's first national library, the Bayezid Library, and after the founding of the Turkish Republic, all libraries that belonged to madrasas, mosques and dervish lodges were assigned to the Ministry of Education. Nowadays, Turkish libraries showcase rich book and manuscript collections, and there are more than 150,000 manuscripts available in the Süleymaniye Library alone.