Come one, come all to Rumi’s very special ‘Wedding’ 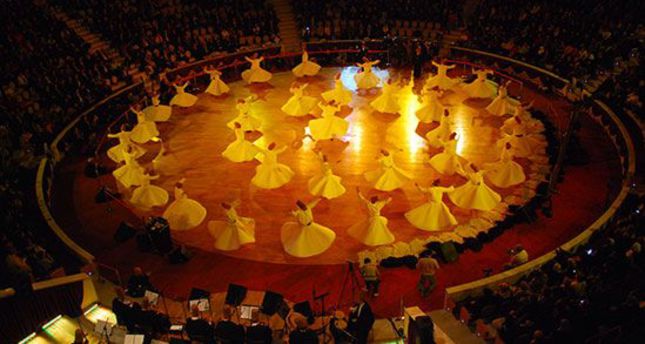 Wednesday, Dec. 17, marks the celebration of the life of Sufi mystic, Rumi, also known as Mevlana. The upcoming week will include festivities to honor the 741st anniversary of his death, referred to as Şeb-i Arus (The Wedding Night)

Every year on Dec. 17, the anniversary of the Sufi mystic and philosopher Rumi, otherwise known as Mevlana, is commemorated as a celebration referred to as Şeb-i Arus (the Night of Union). Rumi-lovers from all over the world flock to Turkey, in particular to Konya, in order to celebrate this beloved Sufi poet's ultimate union with God.

Mevlana Jalal al-Din Rumi, the 13th century Sufi poet and mystic otherwise known as Rumi, died on Dec. 17, 1273, in Konya, where he was buried, and his shrine, Yeşil Türbe (Green Tomb), now the Mevlana Mausoleum, has since become a pilgrimage site. This week, leading up to the anniversary of Rumi's death has traditionally become the time of year where his followers flock to Konya to celebrate this "blessed union."

Although Rumi was born on Sept. 30, 1207, in Tajikistan, he settled in Konya at the age of 25, where he later became the head of a madrassa as well as an Islamist jurist and Molvi (Islamic teacher). His teachings became the basis for the Mevlevi Order, also known as the Order of the Whirling Dervishes, founded by his son Sultan Walad and followers after his death. Rumi believed in the use of music, poetry and dance as a path to reach God, and it was from his teachings that the practice of Whirling Dervishes developed into the ritual form known as the Sema.

In the Mevlevi tradition, Sema represents a mystical journey of spiritual ascent through the mind and love towards the "Perfect." The spiral motion represents turning towards truth, growing through love and abandoning the ego. The Sufi dervish returns from this spiritual journey having reached greater perfection with the ability to love and be of service to all of creation without discrimination. This ritual is a very sacred part of Turkey's cultural heritage, and in 2005, the nearly 800-year-old tradition of the Mevlevi Sema Ceremony was included in UNESCO's list of Intangible Heritage of Humanity.

Rumi's doctrine advocates unlimited tolerance, positive reasoning, goodness, charity and awareness through love, and his beautiful verses have found relevance all over the world and throughout time. His works, namely the Masnawīye Ma'nawī (Spiritual Couplets) and Dīwān-e Kabīr (Great Work) are considered by many to be the greatest works of mystical poetry to ever exist. Rumi's prose has been translated into many languages and is well loved worldwide, and he remains one of the most popular and bestselling poets in the U.S.

It has now become a steadfast tradition that every year, Rumi lovers and followers from all over the world flock to Konya to visit the 13th century Mevlana Mausoleum, which also houses a mosque, school, dervish living quarters and tombs of a number of significant leaders of the Mevlevi Order. During the week leading up to Dec. 17, and on the date itself, a variety of events are held throughout the town, including the Mevlâna Cultural Center and the new Konya Metropolitan Municipality Sports and Congress Center, which will be hosting Sema ceremonies on both Dec. 13 and Dec. 17.
This year, in commemoration of the 741st anniversary of Rumi's ultimate union with the divine, Konya will also be hosting a series of exhibits, conferences, panels, workshops, lessons on the Masnavi in both English and Turkish, theatrical plays and readings in addition to dozens of Sema ceremonies for the over 60,000 people, expected to take part in the festivities. This is a busy time for Konya and accommodation and events can be booked out, so many tour agencies offer special "Rumi" tours to help facilitate visitors at this time of year.

If a trip to Konya is not feasible, then don't fret, because a very special celebration for Şeb-i Arus is now also held annually in Istanbul. On Saturday,
Dec. 13, Şeb-i Arus Istanbul 2014 will be a major celebration of Rumi's "Wedding" starting at 8:00 p.m. at the Sinan Erdem Sports Complex in Ataköy. This very special event, in which 15,000 people are expected to attend, will have a number of Turkey's well-loved performers, including Yavuz Bingöl, Mustafa Ceceli and Alişan to name a few, taking the stage to recite poetry and hymns to accompany a Sema ceremony. Saturday's event will be the third annual Şeb-i Arus Istanbul celebration, and every year the event is attended by significant political figures from Turkey and all over the world. Last year, President Recep Tayyip Erdoğan graced the stage by reciting a hymn and hopes are he may do a repeat performance this year! Proceeds for this event will go to charities and tickets are available at Biletix.

According to the Ariflerin Menkıbeleri (Parables of the Sages), Rumi once held a simultaneous Sema in 40 different locations. In an effort to relive the tradition, Sema at 40 Places will be a special simultaneous ceremony held between 2:00 p.m. to 11:00 p.m. on Wednesday, Dec. 17 in Konya, Istanbul, Ankara and in dozens of cities throughout the world such as New York, San Francisco, Vancouver, Barcelona and even Mexico City to name a few. In Konya, the Sema will take place at the Şems Hotel, in Istanbul at the Yoga Ashram in Moda and in Ankara at the Dizem Health Center. The Mevlâna Education and Cultural Association will also be holding a Sema and musical ceremony on Dec. 17 at 9:00 p.m. at the Caddebostan Cultural Center in Istanbul and in Ankara, the 741st Şeb-i Arus Sema Ceremony, organized by the Mevlana Culture and Art Trust will be held at the MEB Şura Hall on Dec. 19, 2014.

"Come, come, whoever you are. Wanderer, worshiper, lover of leaving. It doesn't matter. Ours is not a caravan of despair. Come, even if you have broken your vows a thousand times. Come, yet again, come, come." -Rumi