The newspapers of captured Ottoman soldiers tell their stories 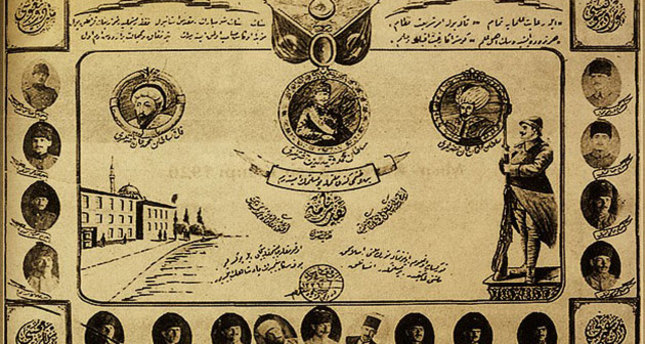 Captured Ottoman soldiers produced newspapers during World War I in order to relieve their suffering and brighten their lives, says historian Ahmet Uçar

A number of newspapers were published by imprisoned Ottoman soldiers during World War I as educational and leisure material, historian and author Ahmet Uçar told Anadolu Agency. His latest article in Yedikıta History and Culture Magazine depicts the struggle of 202,156 imprisoned soldiers surviving in camps in numerous places such as Egypt and Siberia.

Uçar addressed the suffering of Ottoman soldiers, saying that soldiers in the Egyptian camp published 23 newspapers with various titles along with over 10 others such as "Püsküllü Bela," "Köpük," "Altay," "Ne Münasebet" or "Niyet," which were released in Russian, Tatarstani and Siberian camps.

Comparing the harsh conditions of being under arrest to fighting in war, Uçar said soldiers participated in various activities from sports, music and language, to newspaper publishing as a way of relieving their suffering and in order to bring some color to their lives. The history of young Ottoman military officers' captivity is not limited to suffering in Egyptian deserts, Burmese marshes, icy Siberian mountains or prisons in Corsica and Guyan, or in suffocating Indian weather. Imprisoned soldiers were kept in death camps, and some of them even lost their eyes in English camps in Egypt, Uçar continued. The Ottoman soldiers endured such difficulties with great patience.

World War I marked history with two important words – "death" and "captivity." Almost 2 million soldiers aged 15 to 25 sacrificed their lives and land for the sake of the ideals of authorities, and nearly 1 million suffered in prison camps. Their historical accounts offer much information about handwritten newspapers copied on carbon paper, the location of martyrdoms and the support of Muslim locals, who helped them to escape by bringing them fake passports. Uçar said the tragic incidents affected at least 202,152 people.

The wide range of newspapers also shows the interest of Ottoman soldiers in this field. In Seydişehir camp in Egypt, soldiers published newspapers: "Tan," "Yarın," "Nilüfer," "Hilal," "Ocak," "İzmir," "Nasreddin Hoca," "Sada," "Zincir," "Türk Varlığı" and "Esaret Albümü." Imprisoned soldiers in the near-by Kuveysna camp produced "Esaret," "Tıraş," "Karikatür," "Tetebbu," "Tan" and "Badiye," while in another Cairo-based camp, the newspaper "Kafes" and in Heliopolis "Güvercin," were published. Uçar also mentioned activities in Bellary Camp in Myanmar, and the newspaper "Ajans" managed by Major Cemal Bey. Apart from "Ajans," four other newspapers were published in the same camp: "Püsküllü Bela," "Köpük," "Tulu (Doğuş)" and "Kara Günler." Moreover, in Thatmyo Camp, Turkish captives published "İrewadi" (İravadi) and "Ne Münasebet." These newspapers, which were copied by hand and sent to nearby camps, featured poems, news and geographical and social articles as well as cartoons. "Much more entertaining newspapers were published in these camps," Uçar added.

Ottoman soldiers captured in Russia published a weekly magazine in the Ottoman language, "Niyet," supervised by Mehmet Asaf Bey. This magazine, which published 37 issues, was also written by hand and copied by carbon paper. Asaf Bey's magazine received articles from captives imprisoned in other camps and featured non-political articles.

The handwritten newspaper "Kurtuluş," which was published by Turkish prisoners in Krasnoyarsk, described incidents in the camps as well as the surrounding areas. Published between Dec.10, 1915, and March 1, 1918, a magazine entitled "Vaveyla" was able to run until its 101st issue. Due to a lack of paper and ink, the magazine published just a single copy per issue. This 12-page magazine's aim was to "educate Turkish prisoners within the bounds of possibility," and it included humorous articles, puzzles and riddles and even translations from Russian newspapers. Furthermore, Turkish soldiers imprisoned in Kazan published two newspapers, "Şimal Yağı" and "Kurultay," while those in Ufa published "Altay." Turkish captives in these camps received aid from Tatars and the then Turkish Red Crescent, Uçar concluded.