The power of color 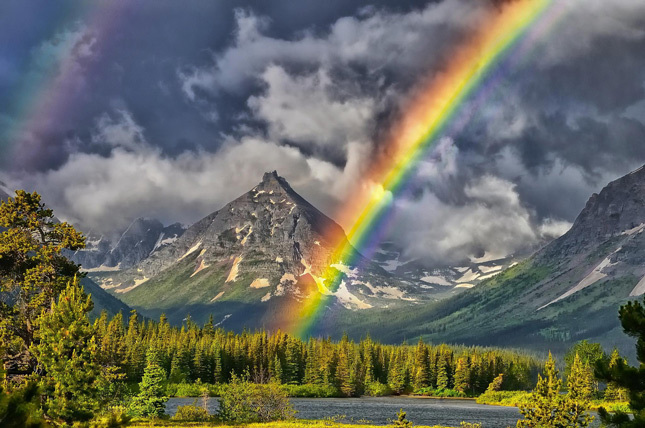 Seeing red? Feeling blue? Tickled pink? Or are you just feeling a bit off-color? Discover what colors represent, for they often contain more meaning than meets the eye

There is no doubt that color plays an important part in our lives starting from our earliest years. They are visual cues that help us convey emotion, communicate and symbolize ideas. They are a ubiquitous aspect of our lives, whether you are picking what color shirt you want to wear or simply looking at the bright blue sky. Although sight and the human brain identify colors and their delights, it is also important to know how color can affect you. Colors can define the mood of a person or they can be used to create a specific aura or energy. What is it about green that relaxes people? Why do weightlifters do better in blue gyms? Why do we get hungry when we see red? Let us explore the power of the primary and secondary colors.

l Red: Red is the most extreme and emotionally intense color on the color wheel. Our prehistoric ancestors saw red as the color of blood and fire; as time passed, red also became the color of passionate love, violence, seduction and danger, as it stimulates a quicker heartbeat. Most of red's symbolism today arises from the powerful associations of the past, and it is also a magical color as well as having religious reference. The Greek's thought red symbolized superhuman heroism and the color also represents Jesus's crucifixion in Christianity. A total of 77 percent of all the flags in the world contain the color red and it is the international color of the "Stop" sign. Red also has significant meanings that vary across cultures. For instance, red is the most popular color in China and represents good luck in almost every Asian country. Children in Japan give a twist to the stereotypical yellow sun by drawing the sun as a big red circle. Red is also an auspicious color of marriage, and brides in India and Nepal wear red sarees on their wedding night; red kimonos are also very popular in Japan. Red also has an interesting way of making us feel hungry. The color stimulates the brain to release endorphins that stimulate appetite, and is a common method used by advertising professionals. You may have noticed before, but big fastfood brands such as McDonald's and Burger King use the color to help encourage hunger.

l Yellow: Yellow is the most luminous of all the colors of the spectrum. It is the color of happiness, optimism, enlightenment, creativity and cheerfulness. Like everything else, the color yellow also has a dark side. Lurking in the background of the color yellow are emotions such as betrayal, egoism and madness. People often lose their temper in yellow rooms and babies tend to cry in them. Yellow is also associated with religious deities, such as in Hinduism and Christianity. In China, pornographic movies are called "yellow movies" and yellow is associated with death in some parts of Mexico. A yellow patch was used to label Jews in the Middle Ages, and European Jews were forced to wear yellow "Stars of David" by the Nazis during World War II.

l Green: Green is not just a color, but it is also a verb. "Going green" is a popular phrase used to refer to becoming environmentally friendly. This is understandable because green has signified nature, growth, rebirth and fertility for hundreds of thousands of years. The meaning of the color can vary across cultures as well. Green is a lucky color in Ireland while it is a holy one in many Muslim countries. In China, however, the color may represent infidelity, and if a man wears a green hat, it is seen as a sign that he is cheating on this wife. In Israel, green symbolizes bad news, and in Spain, racy jokes are considered green. Since it is associated with nature, green is said to have a calming and refreshing affect on people.

l Blue: Research shows that the most popular and most loved color is blue. It is the color of the sky and the oceans, and is a wet, cold and slow color as opposed to the warmth, fiery-nature and intensity of red. Blue is the color that has the most complex and contradictory meanings as well. Dark blue signifies trust, dignity, authority and intelligence. This is the reason why you might see politicians wearing blue ties when making a public speech. Bright blue signifies cleanliness, strength and coolness, whereas light blue signifies peace and serenity. The origin of this meaning comes from the qualities of the sky. The color blue has evolved to become a symbol of depression in American culture, with sayings like "singing the blues" or "feeling blue." On the other hand, "being blue" in German is a reference to intoxication and in Russian "light blue" is a reference to homosexuality.

l Orange: The color orange is one that people either love or detest. This is because it has equal amounts of negative and positive traits associated with it. Orange is hot, healthy, fruity and engaging, but it is also abrasive and crass. Orange is the only color in the spectrum that has taken its name from an object – the juicy citrus fruit. The color symbolizes energy, vitality, cheer, adventure, warmth and good health. It can also symbolize bad taste and a lack of serious intellectual values. Orange is the color that comes to mind when "vitamin C" is referenced and it is also the color of prison uniforms in the United States. Moreover, the middle traffic light in France is orange as opposed to yellow. An interesting fact about orange is that the only word that rhymes with it in the 20-volume Oxford dictionary is sporange, which is an alternative form of sporangium, a botanical term for part of a fern.

l Purple: Purple is one of the rarest colors in nature and has the longest wavelength in the rainbow. If we were to venture back to human prehistory, our ancestors may never have even saw the color purple because it was so rare – something that is very hard to imagine in today's world. Taking all aspects of purple's past and present into consideration, purple symbolizes magic, mystery, spirituality, the subconscious, creativity, dignity and royalty. Purple, being rich and rare as it is, symbolizes nobility and luxury for most people around the world. The "Purple Heart" is the American award for bravery that is presented to wounded soldiers, and purple is a symbolic color for the gay community in certain Western countries. Among Mediterranean cultures, purple was reserved for emperors and popes. Just like the color itself, the usage of purple is also rare and there are only two flags in the world that contain the color purple: Dominica in the Caribbean and the Northern Mariana Islands in the Pacific.