The relative nature of freedom 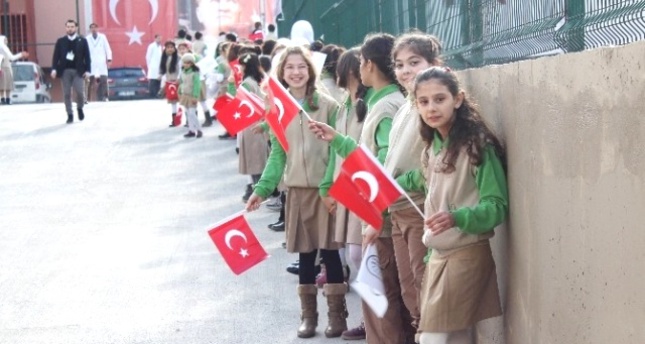 The fact that Turks have experienced oppression and injustice at the hands of the state in the past enables them to empathize with Syrians and Palestinians, who have experienced terrifying tragedies during the recent bitter wars

I recently went to the opening of a Syrian school in Esenyurt, which also happened to be my first excursion into the neighborhood. Of course, we got lost, but while sitting outside a market that sold everything – and literally, it sold everything, from tricycles to sieves – I contemplated how different this neighborhood looked from the other neighborhoods in Istanbul that I knew. It was more like a small Anatolian town. People were stopping and chatting in the middle of the sidewalk and kids were running across the street in different directions; cars were taking their own paths down the streets to miss the potholes, some of which were larger than a family sedan. But all in all, there was a homey, calm feeling, one that is missing in Levent or Kadıköy.

It took us quite a few wrong turns and many stops for directions before we finally found the school. The give-away that we had arrived at the school was the flags hanging across the street. As I walked into the school, I realized I had arrived just in time for the speeches.

The children were standing around in groups, giggling and looking shyly around the room. On the "stage" – perhaps, "red velvet covered platform" would be more accurate – stood a man and a woman. While the man talked in Turkish, the woman translated his words into Arabic.

Necmi Kadıoğlu, Esenyurt's mayor, then took the stage, and I found his speech incredibly moving. He talked about the injustices that the Syrian people who had fled to Turkey had experienced in their own country. He talked about the hardships that they then experienced in Turkey – the poverty, the struggle to make ends meet; it was all very emotional.

But what made me stop and think was when Kadıoğlu mentioned that people in Turkey had experienced injustices in the past. He talked about the headscarf issue; he talked about how people had been forbidden from learning or teaching the Quran, and teachers of the Quran were given the clear message that they were no longer welcome in Turkey. There have been great injustices in Turkey, but fortunately, no one in Turkey has had to experience the tragedy that the Syrians have had to go through.

At no point was Kadıoğlu trying to say that; what the Turks had experienced was the same or even close to what the Syrians had gone through. However, he was making a very important point – Turks are able to empathize with the Syrian people, for they too have experienced oppression.

Listening to this speech, my mind rewound a few years. I remember when I went to Sultanahmet to meet two women Palestinian activists. They were staying in a hotel there and had a few minutes between conferences to meet with me. I had an interpreter with me, and we started to talk about their lives, what they needed and what we could do to help.

Of course, their needs were great. They were trying to establish small workshops in which to train women and impart skills that would help them earn a living: Hairdressing, tailoring, embroidery, accounting and others. The problem was that, while they had computers and sewing machines a year earlier, these rooms had been bombed; thus, they had lost their equipment.

Most of the women they were teaching had lost their husbands -in the attacks on Gaza- who were the sole breadwinners for the families. The women activists were also without husbands, one struggling to bring up six children, the other four children. Yet, they found time to devote to this cause, to come to ask for help to set up new workshops. They were not discouraged by the fact that all their hard work had been blown up. They were not disheartened by the vicious cycle of establishing workrooms and having them bombed soon after.

I felt terribly inadequate and small when talking to these amazing women. They had small children, yet were dedicated to helping the community. And what was I doing?

Our conversation continued, and I asked them about education in Palestine and about how free they were to pursue further education. "We are totally free to pursue our education, as long as the institution is still standing," said one of the activists. "Do Palestinian women have any problems with headscarves?" I asked, as this was at a time when the headscarf issue was still being debated in Turkey. They looked at me, perplexed; they didn't understand what I meant.

I told them about how women wearing headscarves in Turkey were not allowed to attend universities or work in government offices. Their reaction was a mixture of shock and confusion. It was as if these two women had stopped breathing; they simply stared at me bewildered. "But this is Turkey, how can this be?" one of the women asked. The next statement floored me. "I cannot imagine living deprived of such a fundamental freedom," she said.

There are a number of basic human rights, and there is a great variety of oppression. I learned an important lesson that day, and today's school opening reminded me of that: Freedom is relative. From where we sit, we see another person's position and ache for their loss of freedom. We are inured to our own pain and cease to feel it, even while we struggle to regain what has been taken away from us. We are very fortunate today in Turkey to know that the freedoms that were so cruelly wrenched from our hands in the past are gradually being reinstated. We are fortunate today that we can open schools for our neighbors, that we can embrace them and offer them empathy and try to help them heal.