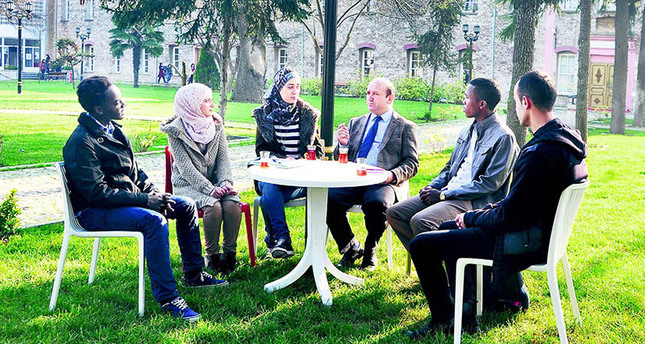 Students from around the world can learn about Turkish culture at Sabahattin Zaim University’s (İZÜ) Halkalı campus in Istanbul, where you can find them conversing in Turkish while sipping tea or engaging in their classes at one of the city’s newest educational institutions

Tea holds an important place in the history of this new university in terms of innovative thinking. The building which is located in the university's Halkalı campus used to serve as an agricultural school (Halkalı Agricultural School) during the Ottoman Era. Zihni Derin, who is considered the "father of tea" in Turkey, visited Batumi, Georgia, in 1924 and surveyed the tea gardens, factories and the Subtropical Plants Research Station founded by the Russians. In the nursery garden, which is now used as the Sabahattin Zaim University campus, he planted tea seeds and saplings, along with citrus and other fruit trees and bamboo rhizomes which he brought back with him. The young plants that grew in this garden were sent to the eastern Black Sea region, and the product known as Turkish tea began its story. Today, new ideas continue to form at the campus which is home to the narrative of the "national drink" of the Turks.

Professor Mehmet Bulut, chancellor of Sabahattin Zaim University, believes that they are taking firm steps toward becoming a world brand in "halal food" and the field of "halal finance." Since the campus on which the university was founded has an important place in the development of agriculture and stock-breeding in Turkey, it provides an established heritage to the university for their mission. Chancellor Bulut points out that Turkey is both an economic and cultural center, and adds "Today, two sectors stand out in the region: Islamic finance, in other words halal income, and halal food." "At Sabahattin Zaim University, we aim to educate young people who will shape the future in these fields. Istanbul is going to be a financial center in the upcoming years. In particular, the city is ahead of the game in being a center for interest-free finance in the region," he continues. Bulut says that they want to provide the necessary academic foundation for halal finance; hence, they have introduced the first masters and Ph.D. programs focused on interest-free banking and Islamic finance. He further notes that the university will soon introduce these programs in English and Arabic as well. "The İZÜ International Research and Study Center of Islamic Economics and Finance continues its hard work to provide Turkey with academics in these fields. Unfortunately, Turkey has fallen behind other countries in the region concerning the halal food sector. The halal food market is huge in Islamic countries. The halal food sector can easily flourish in a country like Turkey where the agriculture and stock-breeding sectors are developed and population is mostly composed of Muslims."

The university is home to students from 40 different countries across the world. Moreover, the number of foreign academics within the university is above average compared to Turkey's other universities. Bulut explains the attention they draw as: "First of all, we are mostly welcoming students from the nearby region. We have students from the Balkans and Europe, but more from Asia and the Near East. Our affordable tuition fee and dormitories for both girls and boys on our campus are decisive factors for students who prefer our university. Students are able to receive an education in Istanbul which is a huge metropolis, and continue their lives in a secure 650-hectare campus where all their needs are fulfilled. It is a social environment, where cultural and sporting activities take place all the time." He thinks that Turkey will be a center of attraction for students coming from Asia and the Near East. According to Bulut, being such a center for the young and elite intellectuals of the Near East will help Turkey to boost its strength. He underlines that Turkey is a great power as well as has potential due to its geographical position and history, and continues: "We are a center between East and West as well as North and South. For instance, there are countries and nations with which we share a common history and culture just a two- or three-hour flight away from us. Today, education is very expensive in the U.S. and European countries, where it has been turned into a business. These countries are both too expensive and too far away for students in the East. However, when these students come to Turkey to continue their education, they are close to their homes and do not feel alienated, since they are familiar with Turkish culture. These students will feel at home in Turkey." When we observe the warm atmosphere at the campus, we see a reflection of the chancellor's thoughts.

İZÜ's administration believes that educating young people who will improve the region that Turkey is situated in, is an important element in boosting Turkey's soft power. Towards that goal, they aim to train the bright minds of future, especially in social sciences as well as in economy and engineering fields. Professor Bulut believes that a manager, a politician, a business man or an engineer who has studied in Turkey becomes a voluntary ambassador of Turkey when he or she goes back to his/her country, making the two countries closer to each other. "This will contribute to the development of both our country and the region in the long run," he claims. "Once, the Near East, the Balkans, Africa and the Ottoman Empire were united by a common culture. Istanbul was one of the most important educational centers of our civilization. The elite minds of this region were trained in Istanbul. The other educational hubs of the region were Konya, Baghdad, Isfahan, Cairo and Granada. Our target should be re-building these educational centers because we can contribute to the development of our civilization by doing so."

The story which commenced with Turkey's adventure in tea continues with Turkish and foreign students who want to become a part of Turkey's future at İZÜ's campus.