An ancestral language with a different alphabet 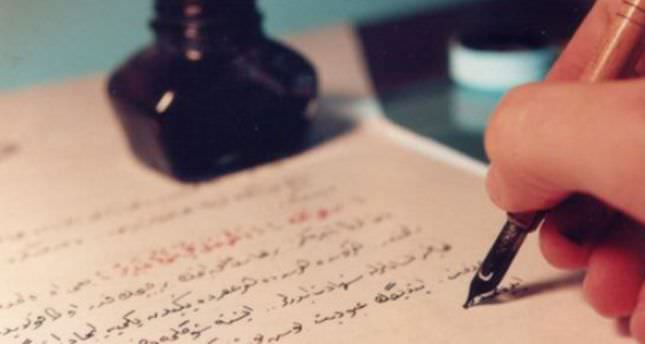 Recently proposed as an elective course at high schools, the Ottoman language is not entirely different from Turkish. lt is the ancestral language of Turks who have been living in Anatolia for centuries. The difference lies in its letters and the lack of invented words

Turks used to have two alphabets before they adopted the Islamic faith. The first one was "Göktürk script" or "Old Turkic alphabet" consisting of 38 letters created by the Göktürks, a nomadic empire of Turkic people which ruled the Central Asia between 6th to 8th centuries. The alphabet was written from right to left and features runic script. Going back to the 8th century, the Orkhon inscriptions were written in Old Turkic alphabet. The earliest language of Turks was not solely used by the nation's elitists because another inscription brought into light from the Valley of Talas is told to be written by an ordinary villager.

The second alphabet before the Islamic period among Turkic societies was "Uyghur alphabet," a variety of Old Turkic language spoken by ethnic Uyghur people who abandoned nomadic life and settled down. Initially, Old Uyghur was adapted from the Sogdian language written in three scripts, one of which was Manichaean script designed by Mani, the founder of Manichaeism, and later evolved into the Old Uyghur alphabet. With 16 letters, the Old Uyghur alphabet was not as developed as the Göktürk script, but Uyghur people know printing and many texts written in Uyghur language have survived to the present day.

When Turks adapted the Islamic faith, they began to use Arabic script, a member of the family of Semitic languages and one of the world's oldest alphabets. Apart from ancient Egyptian script "hieroglyph," the origin of nearly all writing systems takes its root from Arabic alphabet. Certain resources suggest Ishmael, the son of Abraham, was the first person who learned the Arabic script. Similar to the Persian alphabet which is based on the Arabic script, Jews living in the Arab world also adapted it into the Hebrew language. To illustrate, the letters "p," "ç" and "j" are not included in the Arabic script, but exist in the alphabets of these two nations.

At the time of the Ottoman Empire, the Arabic script laid the foundation of the sultanate's official language. The more the borders extended to the Middle East, the more Arabic and Persian loanwords were added to the Ottoman Turkish language because cultural and linguistic interaction was indispensable. Upon the collapse of the empire, the revolutionists who took power prohibited the use of almost one thousand year-old Ottoman Turkish script with "the Law on Introduction and Application of Turkish Alphabet" in 1928. Penalty was imposed to those who violated the law. In addition, it was forbidden to publish Turkish books, newspapers, magazines, advertisements and signboards in Arabic script. Even further, some marginal people collected some Ottoman Turkish books and documents from libraries and destroyed them.

Although the revolutionists mocked the shape of Arabic script, the Latin alphabet does not have enough equivalents to voice Turkish sounds, which means one of the world's richest languages was bound to regress and become a poor and ordinary language. The 1928 act does not mention Göktürk or Uyghur scripts, but Latin alphabet as "Turkish letters." This is because the Arabic script, which was willingly adopted by Turks for many years, was excluded and the Latin letters that the Ottoman people were once cool towards, due to religious and cultural reasons, were declared as Turkish letters.

The Ottoman Empire was home to different nations whose people were talking in their own languages. However, the official language was "Lisan-ı Türki" (The language of Turks). In the 19th century, Ottomanism, a political idea was emerged with the aim of accepting all separate ethnicities as "Ottoman" with equal civil rights. The proponents of Ottomanism supported the unity of language and called Turkish "Lisan-ı Osmani" (The language of Ottomans). The revolutionists used to describe Turkish as "Osmanlıca" (Ottoman language) to humiliate it as they did to other components of the previous political regime. If you ask an elderly about Arabic script, they would say it is old Turkish. To make it clear, the Ottoman language was not different from Turkish.

Compared to the Latin alphabet, Ottoman script is hard to write, but has other opportunities. When you write down a word, you do not always have to sound all letters while reading it. Sometimes, you write fewer letters, but sound more. It looks like mathematics when you get used to its system. The learning process accelerates when you comprehend certain formulas. Ottoman letters also safeguard your sight because they are mostly in round shape. Some say that fewer people used to wear glasses because they used to read an easy language. The script has also artistic character and might give inspiration to create different writing styles. You may even write encrypted text. As it is written from right to left, the Ottoman script is suitable with human nature because of the common right-handed trend. Hebrew, Indian, Japanese, Chinese, Uyghur, Göktürk and Assyrian scripts are all written from right to left. Only Latin alphabet is written from left to right.

The Ottoman Turkish language features shorthand character because the letters are intertwined each other while writing and is coherent to use when taking fast notes. Many renowned names from famous Turkish author Aziz Nesin mentioned with his atheistic identity to late President Kenan Evren known with his Kemalism ideologies were told to take notes in Ottoman Turkish.