Heroes of the status quo, not the people 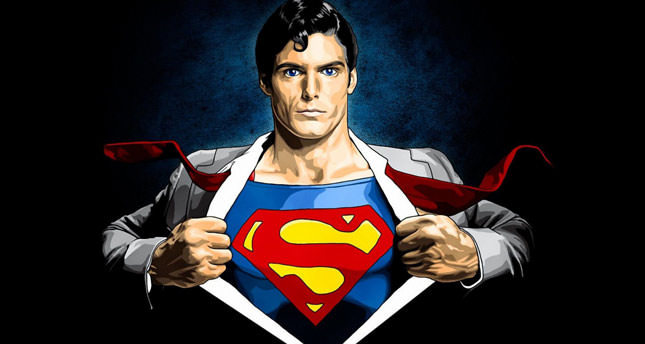 by Enes Çiçek Jan 06, 2015 12:00 am
In 1938, with World War II around the corner, the affects of the Great Depression were still being felt by American citizens, and a lack of confidence toward governmental institutions remained. With his blue tights and red cape, Superman came into the world during this period. He came from another world, but he was the prototype American farm boy; he had superhuman abilities, but had more humility than the most humble human being. Superman, who can be regarded as the first comic book character, was the undaunted defender of truth, justice and the American way, locked into an everlasting struggle with villains. He was everything that every American parent wanted their sons to be: the image of goodness and righteousness, extremely powerful but sensible, and down-to-earth, despite being able to fly. In other words, Superman was how the American people wanted to see themselves both within their borders and internationally. This superhero, who was hard-working in his daily life but equipped with supernatural powers in times of need, was the embodiment of the American Dream.

However, it soon became evident that the concepts of truth, justice and the American way, which Superman defended, were changeable according to circumstances. For instance, during the period when America kept itself safe from the problems that dragged Europe into war, Superman was struggling with arms dealers, trying to stop them before they pulled America into the war. But following Pearl Harbor, Superman's job was to enlist the army, slap Japanese generals and bring fanatical Nazis into line.

Such flexible idealism of the very first superhero Superman characterizes American politics, and so by examining the acts of other American superheroes, we can gain greater insight into American politics. For instance, Captain America, who appeared a couple of years after Superman, is depicted as punching Hitler in the face on the cover of his first comic book. During Kennedy's presidency, Superman confessed his real identity to John F. Kennedy (which he could not even admit to his long-time girlfriend Louis Lane), by saying: "After all, if I can't trust the president of the United States, who can I trust?" This was clearly intended to create an image of a trustworthy president for the public. Conversely, when the U.S. was shocked by the scandals of Watergate during the 1970s, superheroes stood out with their statements emphasizing a lack of confidence and distrust in government agencies. As evidence of this distrust, in one book, Nixon was portrayed as the head of a malicious team who wanted to invade the world, while Ronald Reagan was drawn as a cowboy mummy.

In their book, "The Myth of the American Superhero," John Shelton Lawrence and Robert Jewett claim that all the heroic stories in American literature can be gathered under the title "American Monomyth." According to their claim, a standard American hero story develops in this way: a nation which prospers and is at peace is suddenly threatened by a "villain;" the law-enforcement officers and other government agencies cannot save their people from this threat; a (super) hero comes forward, refuses all the things that are brought up to dissuade him, and does everything he can to save the nation; with the decisive victory which is won by the help of fate, the nation goes back to its old and safe ways; the hero vanishes into thin air.

Lawrence and Jewett put forward that this American "monomyth" secularizes Jewish- Christian stories, which require society to repent as a condition of total salvation. This secularization blends the image of a selfless hero who sacrifices his life for others and the crusader who destroys the villain with his faith. (Actually, the anti-authoritarian attitude of the hero rules out the core foundation of Judaism and Christianity). The supernatural powers which are given to the superhero represent people's hopes for divine power.

The most interesting feature of American superheroes is that they are the defenders of the status-quo, not the revolution. The values of the nation are also the values of the superhero. This is actually an attitude rather than an identity. All superheroes believe in equality and democracy as the best form of government. Although they alienate themselves from the system, you cannot find a single superhero who wants a bloody revolution to change the current political system. They are also against all types of slavery and any modern manifestation of slavery in theory. In other words, we can say that superheroes are the defenders of the common beliefs and values of Western people. Conversely, it is not possible to see a superhero taking sides in a labor struggle.

Super heroes are very fond of defending the status-quo because when their Puritan ancestors first came to America, they refused to go beyond their borders to take advantage of other opportunities, and believed that the rules that they introduced within their borders were the best. We can illustrate this national trait, which still continues today, by turning back to the first example. Donald Rumsfeld's pose between Spider Man, the defender of New York, and Captain America, the defender of the world, shows that the U.S. acts with a superhero logic toward any international attack, including 9/11. People who have the power to right all wrongs do not need others, and their belief is that it is not possible for them to regress while using their powers, since they are acting with a right purpose.